Last year, many observers who were worried about the rise of the far-right in Europe and the United States felt relieved after the former leader of the small Green Party, Alexander Van der Bellen, won Austria’s presidential elections by a small margin. He managed to defeat the seemingly nice face of Austria’s far-right Freedom Party (FPO), Norbert Hofer, by mobilising the liberal, left, cosmopolitan and urban part of the electorate behind him. But that race was for a political position of limited influence (Austria is a parliamentary democracy), and Bellen’s victory was very narrow.

Now, Austria is getting ready for national parliamentary elections and most polls predict that the far right will once again come a close second. According to the last poll conducted before Sunday’s election, the FPO is expected to get 27 percent of the vote, behind the conservative party (OVP), which is estimated to gain around 33 percent. The incumbent social democrats (SPO) are expected to get only 24 percent of the vote.

But the relative strength of the far right in the polls, which implies that they can become a junior partner in a coalition government, is not the most worrying thing about the upcoming election – the right-wing swing of the country’s two main parties is.

A traditional political establishment composed of the SPO and the OVP ruled Austria for a very long time. This system, where the two main parties shared power for most of the time, was shaken only in the late 1980s, when the FPO and the Greens were established. The FPO eventually became a junior government partner in 2000. But more significantly, the FPO has had a deep impact on the country’s political discourse throughout the years, as it managed to carry its aggressive politics towards minorities to the mainstream.

The FPO, which was formed as a traditional protest party, lost its appeal and was nearly disintegrated after being part of the governing coalition between 2000-2005. Yet, the FPO rose from its ashes in the last decade. In order to make a comeback, the party removed its economically liberal members and replaced them with far-right fraternities fond of the traditional sport of fencing.

As a result, 2005 onwards, the FPO concentrated on the imaginary “Muslim enemy” to stay relevant and cast Muslim immigrants as the scapegoat of all social and political problems in today’s Austria. It called for Islam not to be legally recognised as a religion and regularly used slogans such as “Islam is not at home here” and the like for its election campaigns. The party even called for the surveillance of Muslim prayer rooms and the closing of Muslim Kindergartens and schools.

In a nutshell, the FPO wants to reverse the 1912 law that recognised Islam as an official religion in Austria and reverse the country’s quite tolerant – compared with several other European countries – attitude towards Muslims.

Slowly but surely, the rest of the political parties in Austria followed suit. The peak of this development manifested in the 2015 Islam Act and the 2017 Integration Act. While the first has institutionalised a number of anti-Muslim claims made by the FPO, the latter banned the wearing of the full face-veil. The veil ban has had far-reaching consequences. Since it was implemented on October 1, civilians – not the police! – started stopping Muslim women and hindering their right to free movement.

Neither of these acts was concocted solely by the far-right FPO; they were both approved in parliament by the majority of the MPs from the SPO and the OVP.

The election campaigns for this year’s parliamentary elections were in line with the anti-Muslim sentiment that led to the approval of these two acts, and were generally shaped by far-right positions.

The foreign minister and new leader of the OVP, 31-year-old Sebastian Kurz, who renamed his party “List of Kurz – The New People’s Party”, was able to present himself as a tough law-and-order politician throughout the election campaign. He worked for the closure of the Balkan and Mediterranean immigration routes during his time as foreign minister.

In his campaign, Kurz asked the right-leaning Austrian voters to give their votes to the OVP, claiming that he is the one capable of actually implementing original anti-immigrant FPO-positions to law.

But Kurz was not only targeting staunch FPO supporters; he has something to offer to the others, as well: His discourse is more ambivalent than any of his rivals, giving space to interpretation and leaving the listeners with an image of him as someone they can relate to, wherever they may place themselves on the political spectrum.

The SPO is less ambivalent in its discourse, but also more silent on the “hot issues”. The party seems to be facing a programmatic dilemma between showing internationalist solidarity with the marginalised, the immigrants, and the working poor, and protecting Austrian workers as a traditional labour party. In terms of the Muslim stereotype, the party’s dilemma arises between its anti-racist agenda on one side and its secularist anti-religion agenda on the other. Both camps are active and vocal in the party, causing divisions in party ranks. The party’s leader and current Austrian chancellor, Christian Kern, has not shown the ability to lead the party on a stringent strategy. So there is still a chance that the party will move further towards the right after the election.

After the election, the OVP and the SPO are not likely to form another coalition, given that the last coalition formed by these two mainstream parties was beset with friction and deadlock before it finally broke down earlier this year, triggering the forthcoming elections.

So after Sunday’s election, the main question will most probably be: Who will join ranks with the FPO and form the governing coalition?

Will it be – as most commentators tend to believe – the OVP, since it has, in fact, adopted numerous positions claimed originally by the FPO and since both share a neo-liberal economic programme that strengthens the rich and cost the poor? This model is already practised locally in the Upper Austrian county.

Or will it be the SPO? If the right-leaning camp within the party, which has a hard stance on immigration politics, becomes more dominant, the party can easily find enough common ground with the FPO to form a coalition. This model is also currently in practice in the county of Burgenland. SPO’s long-held position to not form a coalition with the far-right FPO, which was established under the leadership of Frantz Vranitzky in 1986, has been officially abandoned, not only for the pragmatic reason of crippling OVP’s chances to cooperate with them, but also because the traditionally left-wing party became more accommodating of FPO positions over time. The smaller parties, liberals, Greens, and some other marginalised groups, will unlikely to make it into a coalition government and again stay in opposition.

In the end, whatever may be the outcome of the election – to some extent – is secondary in terms of Austria’s swinging to the right, because right-wing populism has long been in power and practised by both the OVP and SPO. 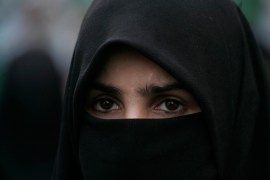 The provision, part of a larger integration package, means those wearing the veil in public will be fined $166.

When anti-Semitism and Islamophobia join hands