What is at least as significant as Trump‘s tax plan itself (pdf) are the reactions to it.

Here is some reality-based analysis. Normally, anybody on the right, and especially in right-wing think tanks, is in favour of any tax cut. That’s what right-wing think tanks exist for. Yet, with regards to bringing back overseas money at a super low tax rate, the Heritage Foundation has said in 2011 that such a move, “would, like its predecessor, have a minuscule effect on domestic investment and thus have a minuscule effect on the US economy and job creation”.

The last, and only, such tax reparation even demanded specific pledges about using the money for real domestic investment that would create jobs. Forbes (who used to cheerfully call itself a “capitalist tool”), wrote that “58 companies, which accounted for almost 70 percent of all funds repatriated, slashed nearly 600,000 jobs while saving an estimated $64 billion in taxes”. Anyone who looks can find that out. What’s fresh is that reality is being reported across ideological lines. Though not across party lines.

Looking at the bigger issue, a wide variety of commentators are actually saying that there is “no evidence” or “little evidence” that tax cuts for the rich lead to the positive effects that are promised, growth in the real economy, more jobs, and better wages.

That’s based on evidence from reality. As such it should be highly praised, even though it’s only partway there, like looking out the window at the weather but not flinging open the door and walking out into reality.

Here’s the full step. There have been five major tax cuts in the last hundred years. All of them have favoured the rich. One of them, in the 1960s, was simultaneous with the launch of Lyndon Johnson’s Great Society and the Vietnam War, so there was vast spending that pushed the other way. The other four were followed by great increases in wealth inequality, bubbles, crashes, recessions or a depression (different only by degree, not kind). Three of those four included massive bank failures.

Trump’s plan is advertised – mostly by Trump – as great for the middle class.

Does anyone remember Mitt Romney?

It is true that about that many people don’t pay Federal income tax. Then comes the sleight of hand. Drop “Federal” and “income,” and say nearly half of Americans don’t pay “taxes”. Mitt, his friends, and supporters said that a lot.

If we’re going to name “makers and takers”, note that corporate taxes as a portion of federal revenue have steadily declined. Payroll taxes have gone up, replacing them almost exactly, shifting the burden from Mitt Romney to the cleaners and groundskeepers for his five houses.

Buy something, and you pay sales tax. Property owners pay real estate, school, water district, sewer district, library taxes, and others. Landlords include that when they calculate rent. Anyone who sins legally pays sin taxes (alcohol, tobacco, marijuana and gambling where legal). There are all sorts of fees from driver’s licenses to fishing licenses. If you commit a traffic violation or a minor crime, you will be fined and charged fees. In theory, these are penalties, but lots of jurisdictions use them as a revenue base, so they are, in that sense, taxes, and they are imposed far more on the powerless poor than on the “I’ve got a lawyer” well-off.

A full-tilt reality check would tell us that growth in the real economy (as opposed to the financial sector), with more jobs and higher wages, has been greater with higher taxes on the rich and on corporations.

Virtually all tax cut proposals refer primarily to Federal income tax, automatically excluding about 47 percent of the people. If we define the middle class as the literal middle, then up and down a certain distance – it can only be said to affect the upper half of the middle class. If it’s a cut for everyone above the breakpoint, then, relatively speaking, it is an increase for those who pay their taxes through all the other means.

In fact, the big tax cuts in the 1980s and in the 2000s (during the presidencies of Ronald Reagan and George W Bush) were actually tax shifts, demonstrated by the fact that while Federal income tax rates have gone down, especially for the rich, and the effective tax rate on corporation has gone down, the proportion of taxes to the nation’s gross domestic product (GDP) has remained fairly steady.

One of the oddities is that various analysts include corporate taxes as part of the tax burden of individuals. Some put the burden on the rich since they own virtually all the stocks. Others say it’s on labour, pushing wages down. It depends on what they’re arguing for, that rich people really do pay a fair share or that cutting corporate taxes will benefit workers. To even debate that hides a fascinating, and perverse, concept.

Is a corporation a separate entity? It has rights and privileges and relative immortality. If it is, shouldn’t it be taxed separately just as separate people are? Is paying taxes a cost of doing business? The almost universal assumption is that it’s not. That would mean that roads, emergency services, police and fire, courts, medical and food supplements to allow low-wage workers to survive, educated workers, educated consumers (so they can read the names on products), borders, and defence, are not costs of doing business.

Conversely, if being a corporation does not provide financial advantages greater than the disadvantage of being taxed as a separate entity, why (in a market system making rational decisions) do it?

A full-tilt reality check would tell us that growth in the real economy (as opposed to the financial sector), with more jobs and higher wages, has been greater with higher taxes on the rich and on corporations. Actual history tells us that when corporate tax rates have gone down – the official rate or the effective rate – growth has gone down. Whatever the theory says, that’s the fact. Cutting the rates for corporations and the rich are invitations to, if not causes of, a new bubble, crash, recession cycle. 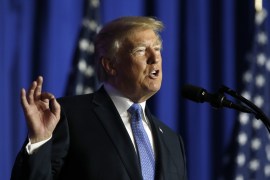 Trump’s tax cuts: For the rich or for the poor?

We speak to economist Arthur Laffer about President Trump’s plans for tax cuts, and we debate democracy in Rwanda.