The legacies of the year 2016 include the introduction into the popular lexicon of the term “fake news”.

To be sure, “fake” is a more than apt description for media content fabricated by Macedonian teenagers looking to exploit the United States market for sensational nonsense.

Ditto for “news” items such as the alleged campaign by Democratic congresspersons in Florida to implement Islamic law – a fiction regurgitated by president-elect Donald Trump’s nominee for national security adviser.

But as The Intercept’s Glenn Greenwald recently pointed out, “The most important fact to realise about this new term” is that “those who most loudly denounce Fake News are typically those most aggressively disseminating it”.

Indeed, the ongoing hullabaloo in US mainstream media over the notion that the Russians hacked the election in Trump’s favour via a sinister campaign of mass disinformation would itself appear to be a strong contender for the “fake news” category.

In a write-up of the findings of a December 2016 survey about fake news, the Pew Research Centre reports that 64 percent of American adults “say fabricated news stories cause a great deal of confusion about the basic facts of current issues and events”.

Meanwhile, 23 percent claim to have either wittingly or unwittingly shared a fake news item.

Amid all of the uproar over fake news, Facebook – itself a principal news source for much of the global population – pledged to crack down on the phenomenon by permitting users to flag potentially phony stories. Flagged items will then be passed along to third-party fact checkers.

But just how effective can efforts to curb the proliferation of fake news be when the very function of the US establishment media is so often to peddle untruths?

One of the more spectacular contemporary examples of this function is, of course, Judith Miller’s reporting for The New York Times – one of the supposed pillars of “real news” – regarding Saddam Hussein’s alleged arsenal of weapons of mass destruction in the run-up to the invasion of Iraq in 2003.

The enduring danger of hyper-militarisation, of course, is that we'll end up accidentally obliterating ourselves in the interest of financial gain

While cases such as Miller’s are generally written off as the exception to the rule, however, spin journalism is in fact par for the course. It’s hardly rocket science: Mainstream editorial lines reflect the interests of political and economic elite, and journalists are by and large reduced to doing the bidding of those elites under the facade of a free press.

Obviously, The New York Times, The Washington Post and the like don’t traffic in the variety of fake news that features Democrats waging jihad on Florida.

But there are also plenty of elements of “fakeness” in typical mainstream content promoting, for example, Israel as a beacon of democracy and reason – or Iran as a predatory terrorist nation intent on subverting the world order.

In light of the present huffing and puffing over Russia’s suspected complicity in fake news dissemination, it’s worth revisiting US behaviour during the Cold War – a solid reminder that the “fake news” industry is nothing new.

Consider the testimony of John Stockwell, former CIA intelligence officer and chief of the Angola Task Force in the mid-1970s, which recounts how the CIA continuously manufactured false news stories to feed to major media outlets in Britain and the US. Among these widely reported fabrications, Stockwell notes, was that Cuban soldiers were raping Angolan women.

Further back on the Cold War timeline, meanwhile, the 1953 CIA coup against Iranian Prime Minister Mohammad Mossadegh was facilitated by attacks on Mossadegh in the Iranian press.

According to former New York Times foreign correspondent Stephen Kinzer, “most of these tirades were either inspired by the CIA or written by CIA propagandists in Washington. One of the propagandists, Richard Cottam, estimated that four-fifths of the newspapers in Tehran were under CIA influence”.

Fast-forward to 2016 and the resurrection of the Russian menace on the international scene – where Vladimir Putin is said to be rigging US elections and sponsoring all manner of media propaganda in between pursuing an ever more apocalyptic capacity for military devastation.

In a recent article for Harper’s Magazine, Washington editor Andrew Cockburn argues that the “new Red Scare” has proved a predictable boon for US defence spending, despite the fact that “Russia’s defence budget is roughly one tenth of America’s, and that its military often cannot afford the latest weapons Russian manufacturers offer for export”.

Reality, however, has little bearing on the profit-oriented logic of the military-industrial complex or the priorities of the US armed forces – thanks to which, Cockburn writes, “actual defence needs take second place to more urgent concerns, such as the perennial interservice battle for budget share”.

In other words, it seems that Macedonian teenagers aren’t the only ones capable of turning a profit from “fake news”.

The enduring danger of hyper-militarisation, of course, is that we’ll end up accidentally obliterating ourselves in the interest of financial gain – a prospect that appears ever more plausible given the impending US president’s insistence that “the United States must greatly strengthen and expand its nuclear capability”.

Unfortunately, some news is all too real. 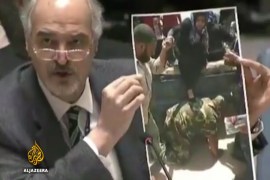 Bashar Jaafari claimed the photo showed Syrian soldiers helping in Aleppo, but it actually depicted a scene in Fallujah.