On January 27, US President Donald Trump signed an executive order to make good on his promised Muslim Ban. One of the primary provisions of the order is a ban on visas to the US to nationals from seven countries: Iraq, Iran, Libya, Somalia, Sudan, Syria and Yemen, which are all Muslim-majority nations.

There is something peculiar about this list. The draft of the executive order begins by citing 9/11 as a failure of the “visa-issuance process”. It blames the state department for preventing “counselor officers from properly scrutinizing the visa applications of several of the 19 foreign nationals who went on to murder 3000 Americans.”

The overwhelming majority of those individuals were from Saudi Arabia, yet, Saudi Arabia is not on the list. Furthermore, when it comes to “homegrown terrorism” of all the Muslims accused, charged, convicted and killed, some of them are from these seven countries in Trump’s list and some are not, some are immigrants and some are American citizens, and a number of them have been entrapped by federal law-enforcement agencies. This either means that the list needs to be much longer or there is something more than national security concerns at play.

Trump promised a “Muslim Ban” as part of his election strategy. He got support for his unlikely candidacy by fomenting the already seething tide of anti-Muslim racism in the US. The way anti-Muslim racism works is that Islam and Muslims are a bogeyman, hated and feared because of how they are “different”, i.e. by how they look and what they do. Muslims are bogeymen not solely because some Muslims are guilty of violent acts against Americans.

As was reported not too long after white supremacist Dylann Roof killed nine black Americans in Charleston, white Americans cause the largest numbers of American deaths by terrorist acts on US soil. Yet unsurprisingly, Trump has not signed any executive orders specifically targeting white Americans. This is because Islam and Muslims have been “othered” – made to be seen as distinctly and most despicably bad and evil in the popular imagination.

Violence against women, honour killings in particular, is cited two times in the draft as something from which the US government is obliged to protect Americans. This specific practice of violence against women has been sutured to Arabs and Muslims in popular conversation. It builds on a broader narrative that Muslim women are oppressed by the men in their lives, their families and the religion they follow, and they need saving – by the US.

Recall, Laura Bush’s call to support the invasion of Afghanistan to save Muslim women. By explicitly including honour killings, Trump is basically telling his supporters “I told you I’d do something about this bogeyman and look, I am.” And this something is doubly significant for people who believe we need to “make America great again”, because it is not only standing against the evils of “Islamic extremism”, but it is allegedly standing up for democracy and freedom.

It feeds into an idea that violence against women is a particularly Muslim thing, due to their backwards culture. Yet in the US, every minute nearly 20 people, the majority of whom women, are victims of intimate partner abuse. However, Trump is not ramping up protections for violence against women here at home.

In fact, while he is marking himself the anti-honour killings crusader abroad, he is cutting funding for the Office on Violence Against Women. This means cuts to programmes around the country that try to prevent domestic violence and provide services, like transitional housing and legal aid – services that would surely be of benefit to the white and working-class women among Trump’s supporters.

Trump also promised jobs and to that end, he signed an executive order to push forward the Dakota Access Pipeline. But of all the jobs he promises, only about 40 will be permanent, which is peculiar considering Trump supporters presumably want permanent work.

He also promised to protect Americans from the scourge of illegal immigration by building a wall. He signed that executive order this week and missing from much of that fanfare is the small detail that taxpayers, and not Mexico, will be footing part of the bill.

And while there has yet to be an executive order, Trump’s recent declaration that he would send the “feds” to Chicago to stop what he called “American carnage” at his inauguration, only thinly veils the real objective: militarisation on the home front. And while that will initially target those living in the ‘scary’ inner cities, it will ultimately compromise the liberty his supporters hold so dear.

So, what is at play here? Trump is continuing what he started on the campaign trail. He is tapping into the fear that breeds the kind of xenophobia that gets folks excited about walls and bans, only to distract them from all the promises he won’t be keeping.

In this way, these moves are a bunch of smoke and mirrors, for which Trump has become pretty famous. However, that doesn’t mean these distractions aren’t dangerous. Indeed, they are. They are a danger to the communities of colour they target. Likewise, they are dangerous for Trump supporters who will find that even with bans and walls, they will still be left behind.

Suad Abdul Khabeer is an assistant professor of Anthropology and African American Studies at Purdue University, founder and editor of sapelosquare.com and the author of Muslim Cool: Race, Religion and Hip Hop in the United States. 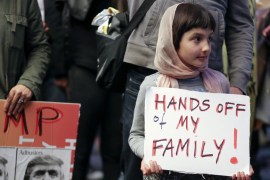 The cameras could not save Philando Castile