There’s no question misogyny played a prominent role in Donald Trump’s successful White House run. The president’s steady stream of sexist tweets resonated with many voters who’ve bought into what I call “misogynomics”: The belief that the erosion of traditional gender roles – where men go to work and women stay home to raise children – has led the US into decline.

Promulgators of misogynomics argue that feminism is a “cancer” that harms both sexes: emasculating men by undermining their traditional role of provider, and poisoning the minds of women by framing the world as hostile patriarchy that holds them “down in low paying jobs”.

Misogynomics claims the gender wage gap is a myth concocted by “social justice warriors”. Advocates cherry pick data to lend credibility to the thesis, such as a study which found British women in their 20s earn more than men (they often neglect to mention that the same study found the trend reversed dramatically once women hit their 30s).

Misogynomics would have you believe that if women would just return to homemaking full-time, everyone would be happier. But this notion is completely divorced from reality. It is impractical, if not impossible, in the current economic ecosystem to engineer a mass reversal of women in the workforce without impoverishing millions of households and decimating the economy.

Moreover, misogynomics prolongs cultural stereotypes which harm women and men, while detracting from policy discussions which could improve the economic lives of all working Americans.

I have yet to see a detailed, viable plan for realising a misogynistic, economic utopia. For example, how would proponents of misogynomics compensate for the loss of female-generated income? According to Pew Research Center, women are the primary breadwinner in 40 percent of US households.  Of those, 37 percent are led by married women who earn more than their husbands, while 63 percent are led by single mothers.

If a married, female breadwinner stops working, her family’s living standard would decline – precipitously in many cases. And if single mothers quit working, it would literally leave the family homeless. How does that possibly make society better off?

Misognynomics also ignores gender agnostic factors that help explain why non-college educated men are leaving the workforce in droves: forces such as globalisation, automation and the erosion of collective bargaining that have gutted the steady, blue-collar factory jobs that defined the middle-class male breadwinner of generations’ past. Driving women back into the home full-time is not going to stop driverless trucks from displacing millions of workers, or the outsourcing of labour-intensive industries to overseas markets where workers earn less and enjoy far fewer protections.

The way to address these disruptions is to develop strategies to help workers overcome them, such as programmes and incentives to train and educate high-skilled workers and crucially, re-train them when the march of technology tramples over their livelihoods. Misogynomics detracts from these important policy discussions.

The gender wage gap is not, as misogynomics argues, a myth. Many robust studies have shown it is a real problem, one which becomes worse as a woman’s work life progresses and is particularly egregious for women of colour . In 2015, white women earned 82 cents for every dollar earned by a white man while black women earned 65 cents and Hispanic women 58 cents.

Misogynomics tries to explain away the gender wage gap by claiming women simply choose lower paying occupations. Not only does this fail to explain the entire gap, but researchers have shown that when large numbers of women move into male-dominated occupations, wages drop. This is bad news for men because the five occupations with the largest projected growth are dominated by women. When those jobs are devalued as “women’s work”, it erodes the earning power of anyone who holds them, and marginalises men who may very well have no other alternatives for employment.

Misogynists no doubt revel in the fact that motherhood is bad for working women. Not only are mothers less likely to be hired; research has found that, on average, women suffer a wage penalty of 4 percent  per child; a blow that climbs to 10 percent for women in high-skilled, high-wage jobs. Meanwhile, men get an average “fatherhood bonus” of 6 percent per child.

Such discrepancies are undoubtedly rooted in part, in cultural perceptions surrounding parenting and childcare. A Pew study found that of the majority of Americans who believe children are better off when one parent stays home, 45 percent think it’s better the mother assume the role of full-time caregiver. Just 2 percent think it’s preferable for the father to stay home.

Preferences aside, the fact is, both parents work full-time in nearly half of two-parent households in the US. When women in those households are penalised financially for procreating, the whole family suffers.

The unity principles  of the Women’s March on Washington advocate equal pay for women, access to affordable childcare, sick days, healthcare, paid family leave and healthy working environments: policies that benefit men as well. Meanwhile, the only people who appear to benefit financially from the notion that feminism has destroyed men’s economic lives are those who scream about it the loudest.

American men and women struggling to keep their heads above water don’t need impractical appeals to simpler times when “men were men and women were women.” They need real solutions for navigating the forces that have left millions of men and women behind.

Patricia Sabga is an economics and global affairs journalist based in New York. 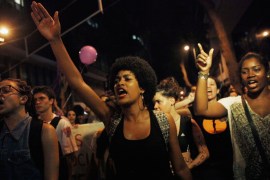 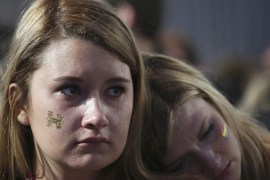 What a Donald Trump victory means for women

53 percent of white women cast their ballot for Trump – a disturbing realisation to many in women’s rights movement.

How Trump’s immigration policies could cost the economy

The economic insecurity behind Trump’s triumph