Barack Obama won the White House in 2008 in good measure on the promise of systematic change, not just to rescue an American economy in the throes of the Great Recession, but in a strategic theatre defined by unjustified wars, torture and other violations of international law and norms.

For the global human rights community, there was anticipation that the new administration would work to restore the most egregious violations of US international legal obligations and hold to account the perpetrators of human rights violations.

Despite the hope generated by his famous 2009 Cairo speech promising “a new beginning” to America’s relationship with the Muslim world, Obama’s presidency was marked by banality and continuity rather than change.

Not only did his administration refuse to hold anyone accountable for the unconscionable violations of the Bush years, it continued, and even ramped up, many of its policies.

The lowlights of his administration’s actions on human rights include: the large scale use of drone strikes outside active war zones; support or muted criticisms of repressive regimes across the Middle East and North Africa – and beyond; sale or supply of far more weapons than any administration since World War II; favouring the “stability” of authoritarian regimes to the uncertainty of “Islamic” or other political movements; unwavering support for Israel; ongoing use of massive surveillance programmes that encourage similar activities by authoritarian regimes against their citizens; failure to close Guantanamo Bay; and a complete lack of leadership on the unprecedented refugee crises across Africa, Europe and the Middle East.

Together these policies represent the many smaller banalities of evil that collectively make nightmares such as Syria not only possible, but inevitable.

At best, Obama can be said to have engaged in a “some truth but no accountability” strategy about our recent past, and continuity despite profound ethical implications when it comes to the present, thus ensuring we cannot “look forward rather than back” precisely because we’re continuing too many past policies rather than learning from and changing them.

INTERACTIVE: What has each president left for their successor?

The actions of his administration reinforced rather than challenged the view that US engagement with human rights over the past eight years has been shaped by American amorality and realpolitik rather than the promotion of universally shared values and norms and the clear mandates of international law .

The failure of Obama to adopt pro-human rights policies, domestically or abroad, must be understood as part of a larger political resurfacing of international law, where rhetoric might be given a shiny new gloss while policies remain largely the same.

Against this backdrop, it is hard not to think that the international human rights instruments, codified by the so-called liberal world order during the past century and a half, have always been in good measure little more than a charade, relying on enforcement through the morality of states that have displayed little of it to spare. The 1899 and 1907 Hague Conventions did not prevent the horrors of World War I or World War II, and the myriad of international human rights instruments have, similarly, failed to protect the human rights of billions of people around the world.

Yet despite all its failings and acknowledged limitations, international humanitarian and human rights regimes have standards against which actions can be measured.

Their failings have been less about the “idea” that there should be a set of rights to which all persons are entitled, than about the political arena within which these rights must be realised and, when necessary, enforced. In that regard, who governs matters greatly, because states are both the violators and ultimate guarantors of rights.

Particularly in the context of the United Nations, the International Court of Justice, and International Criminal Court and similar tribunals, the world’s most powerful states, as represented by the permanent Security Council members – the US, Russia, China, the UK and France, have unmatched power to shape a world order in which respect or violation of human rights is normative.

The process of virtually dismantling the international legal machinery had already begun under the Bush administration. The “ticking bomb scenario” and the process of excepting more people from the protections of what are supposed to be universal human rights were planted in the public mindset. Obama corrected its misalignment to some degree, but his policies ultimately have helped re-orient people’s views further from, rather than closer to, the core norms and values of human rights.

In most areas, rather than setting an example, President Obama largely continued the abrogation of responsibility the US’ paramount position in the international order has placed upon it; a position sadly shared by the other Security Council members.

The least he did was leave the architecture and foundations of the system in place.

Could Trump broadly dismantle the international human rights regime, both at home and abroad? Certainly if his public statements regarding torture, Guantanamo, immigration, refugees, women’s rights, healthcare and freedom of the press map on to an administration policy, there is much to worry about.

And it is here, in the public square, where Trump’s assault on how we understand the normative values and principles of human rights will pose the greatest threat.

The concept of human rights that has animated international law and activism for the past two centuries will be ill-suited to function in a thoroughly illiberal age, where entire religions, ethnicities and countries exist more or less in a permanent state of exception from universal norms and protections.

If our moral compass has been severely tweaked in the new millennium, under Trump it may well be completely re-calibrated as the re-narration of what is necessary and permissible for governments to do in a democratic society again include torture, targeted killings, unlawful detention and worse.

The concept of human rights that has animated international law and activism for the past two centuries will be ill-suited to function in a thoroughly illiberal age, where entire religions, ethnicities and countries exist more or less in a permanent state of exception from universal norms and protections.

To borrow a concept from the eminent sociologist Manuel Castells, we are in the midst of a losing battle between two competing forms of identity, and the politics that go along with them, in the age of globalisation: an open, positive “project identity” that can foster liberal and even progressive values, and a closed, hostile “resistance identity” that encourages and even demands conflict to sustain itself.

Alexander Dugin, one of the loudest right-wing voices in Russia, put it succinctly after Trump’s victory when he declared that “the American people themselves have started the revolution against precisely the aspect of the US which we hated … So let us [now] drain the European Swamp [of] Liberalism. We need a Nuremberg Trial for Liberalism, the last totalitarian political ideology.”

Not surprisingly, senior Trump adviser and Breitbart founder Steve Bannon has spoken approvingly of Dugin’s ideas. If this is the level of rhetorical and moral judgment we can expect from the Trump brain trust, the next four years could well bring consequences even the most troubling predictions of the Trump era haven’t imagined.

Kathleen Cavanaugh is Lecturer of International Law at Irish Centre for Human Rights, National University of Ireland, Galway. She is the author of Minority Rights in the Middle East (Oxford University Press, 2013). 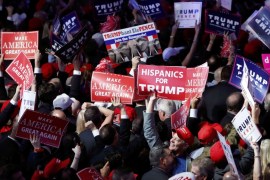 A dismal day for human rights in the US

While Trump’s presidency might be more isolationist on foreign policy, it will be disastrous for human rights at home.