During the last few days, notifications of people in my phone contact list joining the encrypted mobile chat app, Signal, have kept popping up every few hours. These are journalists, rights activists, minority community members of different faiths, and some are politicians and even a police officer or two. It has also been over a week since the story of the disappearance of first of the four bloggers surfaced on Pakistani social media platforms and then the press and stirred fear among many.

Between January 4 and 7, four bloggers and a Karachi-based activist have gone missing from Islamabad and Punjab. Hence, 2017 started on a claustrophobic note in Pakistan, where unknown hands have gone for the throat of free expression.

The battlefront of this fight for reclaiming shrinking space for the freedom to speak up is on social media. While the recent online aggression of the religious nationalists against the kidnapped bloggers is unprecedented in scale, this is not the first time the hate-filled internet jihadis are unleashed against progressives, seculars and the left.

Dissent or critique of state policy is not only not tolerated but snubbed in a way that an example is set for others. It has been happening to outspoken voices against religious conservatism, state’s appeasement of clergy or the military establishment for years.

Since the increase of internet consumption in the last 10 years, the space allowed to the religious supremacists in the offline world has been handed to them in cyberspace, too. A pattern exists of hate-filled online activity against activists and journalists whose lives either ended or changed after violent attacks. In the missing bloggers’ case, the online harassment is the continuation of the oppression of their forced disappearances.

The most controversial of the deactivated pages was taken over by the self-proclaimed “Elite cyber force of Pakistan”, which claimed it had removed all “blasphemous” material from it.

A pro-Pakistani military page with over seven million followers called “Pakistan Defence” framed the critical writing of the disappeared bloggers as blasphemy by an “atheist secular group”. This is not the first time this page has incited violence against people supposedly harming national security.

Pakistan Cyber Force, a Facebook page with over 400,000 likes, in addition to posting against the bloggers, has accused them of taking funds from the Indian intelligence agency. It is an established propaganda move to blame dissent on Indian funding.

A stream of tweets, Facebook posts and YouTube videos are asking for blasphemy cases to be filed against the missing bloggers. Queries of the key hashtags and terms used by the pro-state and conservative religious users show thousands of tweets calling for physical attacks on the disappeared. Twitter accounts that are leading the hashtag wars have one thing in common: They are critical of different political parties, but love the Pakistani military and religious conservatism. Facebook pages continuously posting against the missing bloggers and their supporters have a different set of hashtags in Urdu which equate being secular with atheism.

On Twitter, there is a surge in tweets in Urdu with terms like Gustakh-e-Rasool, (person who commits blasphemy towards the Prophet), liberal (referred to anyone who is a moderate) and secular. Tweets with hashtags created against the bloggers are also over a thousand in number.

As of now, three Barelvi and Deobandi religious groups with sectarian agendas have tweeted and put up Facebook posts against the missing bloggers, calling for their blasphemy trials and executions.

The demonisation of secular voices goes beyond attacks on the bloggers. For example, accounts and pages that are tweeting against bloggers in the name of religion also posted against leading journalist Cyril Almeida when he was put on the Exit Control List for reporting a story critical of the military in 2016 and broadcast journalist Hamid Mir in 2014, when he survived an assassination attempt and accused Pakistan’s primary intelligence agency of responsibility.

Attacks have been levied by ultra-conservative voices on traditional media, too. One-anti secular TV talk show host, in particular, waged his war against secular bloggers and online journalists for months. He has drawn comparisons between Pakistani and Bangladeshi bloggers, has labelled a very small group of secular online writers, including the missing activists, and other progressives blasphemous and implied their views are a threat to national interest.

It is assumed by some in the ultra-conservative part of society that there is an atheist, secular social media movement against Islam and Pakistan, just because tough questions are asked.

The abduction of the bloggers has spread an overwhelming sense of fear and paranoia among digital media users from different professions. And the cluelessness of the government’s response to the disappearance of the bloggers does not help the deterioration of free speech. 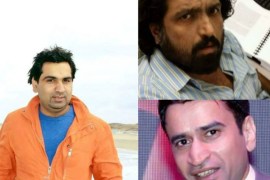 The abductions of five activists are yet another attempt to spread fear among those who speak out in Pakistan. 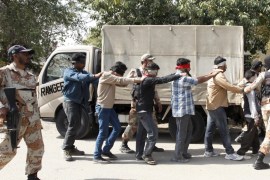 The controversial tribunals were set up in the wake of the 2014 Peshawar school attack that left scores of pupils dead.