The Palestinian High Court has done something extraordinary. On September 8, it suspended the Palestinian municipal elections scheduled for October 8. While the decision came as a result of a complaint to the court about a variety of election-related problems in the West Bank and Gaza, the court itself highlighted the fact that East Jerusalem residents were not scheduled to participate in the vote.

While analysts and pundits have expressed various theories as to the reason for the court’s decision, it is important to focus on the Jerusalem issue.

A city of 350,000 Palestinians, East Jerusalem is the largest populated city in Palestine today but it has not held municipal elections since 1967. Israel has annexed East Jerusalem in a so far unsuccessful attempt to unify the holy city and make it part of the “united capital of Israel”.

Palestinians living in East Jerusalem have continuously boycotted the Israeli-run municipal elections for the unified city and have therefore had no elected leadership or a say in what happens to their neighbourhoods and their city.

During the talks in Oslo that led to the Palestinian-Israeli memorandum of understanding, often called the Oslo Accords, which was signed at the White House in 1993, Israel agreed to allow existing organisations in East Jerusalem to continue to function.

Institutions such as the chamber of commerce and the Orient House acted as a de facto local government, but Israel soon reneged on its commitment and closed down in 2001 all representative institutions, including the Orient House.

READ MORE: Israel and Palestine – breaking the cycle of violence

The closure violates Israeli commitments at the Madrid talks in 1991, and a letter of commitment by then Israeli Foreign Minister Shimon Peres in October 1993.

Even symbolic elections for an East Jerusalem ‘shadow’ municipal council could have a large effect towards putting Jerusalem back on the map ...

Palestinians also extracted another important concession as part of the Oslo Accords, namely that East Jerusalemites can participate in the elections of the Palestinian Legislative Council.

To avoid addressing the issue of sovereignty, the Israelis allowed Palestinians to vote for their representatives using post offices in East Jerusalem. The idea was that those votes were somehow absentee votes which would resemble how dual citizens in many parts of the world are able to vote while living in “another country”.

While Palestinians from Jerusalem have therefore voted for national legislative and executive representatives in Ramallah, they have not been able to elect the much less political municipal representatives.

But even symbolic elections for an East Jerusalem “shadow” municipal council could have a large effect towards putting Jerusalem back on the map and more importantly better organise the city which is experiencing high level of chaos.

In the absence of elected local government, and after the unexpected death in May 2001 of Faisal Husseini, the well-loved leader, the city has been totally leaderless, becoming a sort of political orphan. The Palestinian government based in Ramallah has been brutally and forcefully barred from carrying out any activities in East Jerusalem.

The Palestinian government is not allowed to sponsor events – including cultural events – and any activities held under its name are quickly banned. Events as innocent as a children’s muppet festival were banned in 2013 by an Israeli military order because it was funded by a grant from Norway channelled through the Palestinian Ministry of Culture in Ramallah.

Without local government elections, and with the Palestinian government barred from exercising any activities, the city has slid into disarray. Local thugs often rule the city, fighting over neighbourhoods now run by gangs who demand protection money from disgruntled business people.

The Israeli police, which has sovereignty over East Jerusalem, is often reluctant to follow up on complaints by the local population, forcing them to pay the protection money or do what some of these gangs demand. In some areas, there is an unholy alliance between thugs and former political prisoners aligned with the various Palestinian factions.

Large families and individuals from Hebron are also somehow represented in these unelected street leaders. So if you are not part of these families or groups you are left totally at their mercy. In addition to controlling the streets, these groups are sometimes involved in land fraud and protect undesired squatters, leaving the home owners totally unprotected.

While elections in East Jerusalem, even through post office absentee polls, could help create recognised and legitimate local leadership, it will hardly solve the major problems of sovereignty, city planning and development.

But in the absence of a serious peace process, issues of daily life become much more important to  Jerusalemites, who have seen their city retract tremendously in the past 50 years as a result of occupation, annexation and abandonment. 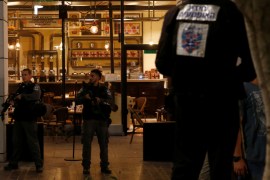 Israel and Palestine: Breaking the cycle of violence

The attack on Israelis in a Tel Aviv cafe reflects the frustration that Palestinians experience on a daily basis.