There was once a Turkish tradition of shadow puppets that children and adults would watch throughout the Ottoman Empire. The characters were called Karagoz and Hacivat, the former meaning “Black Eye” in Turkish after the character’s dark and haunting look. Over time, in Lebanon and elsewhere, the term went on to mean a clown or joker, or Karagoz.

Today, politics in Lebanon reflect both meanings of that term: the clown and the puppet show. Every evening, Lebanese are entertained on the TV news by the splendiferous view of their politicians meeting and greeting each other.

Nothing much gets done – there is no president and only a transitional government. But, there they are, the well known cast trading deals and whispers that, like the unrequited love of Victorian novels, never transpire. It may be harsh to call them clowns, but the charade, the endless soap opera, does go on and on.

Meanwhile, some also argue that the reality of Lebanon also reflects the original idea of Karagoz, the shadow puppets. The local leaders are the willing servants of regional agendas, manipulated by taut golden strings stretching from Tehran and Riyadh to Beirut.

Last piece of the puzzle

The primary theory, probably right, is that there is no president in Lebanon because Iran is holding out on that until there is further news about the future of Syria. Once this shows the light of day, and Bashar al-Assad’s fate is more secure, the time will come to elect a suitable president in Lebanon.

Until then, Hezbollah is clinging to Michel Aoun while the opposite side demonstrates an equivalent antipathy to his election. There are many possible compromise candidates; the clinging to Aoun is a convenient filibuster, an excuse not to agree on a deal.

READ MORE: In the Middle East, the way we were

Lebanon will be the last piece of the puzzle to be put into place in any future Middle East arrangement. This was once to preserve Hezbollah’s profile as the ultimate resistance to Israel during any effort to resolve the Arab-Israeli conflict.

Lebanon will be the last piece of the puzzle to be put into place in any future Middle East arrangement.

Today, Lebanon is the last card because it matters least. It can be conveniently ignored while larger matters  – Syria, Iraq – are sorted out. All this is a testament of the endless dependency on greater regional powers – and the puppetry of Karagoz.

Why such a dependency? Lebanon was often a small part of larger empires, or a haven for minorites hiding in valleys and mountains, praying that marauding armies would blithely pass them by. That is fertile soil for the development of dependency, a world where one is not in control of one’s fate.

It is also worthwhile to remember that the Lebanese genius lies in trade. The great mercantile spirit that lifted Phoenician sails to the Atlantic and beyond was fuelled by a healthy greed.

This was once married to invention and creativity – alphabets and amphorae full of wine or garum – but today it is a more basic and raw desire for gain, uncomplicated by such cultural claptrap. Many Lebanese, especially leaders, can be bought.

This sense of powerlessness alongside a keen greed leads to a reflex for short-term advantage: take whatever one can, whenever one can, for who knows what will happen tomorrow?

Ironically, the hated enemy to the south, Israel, has its own version of such short-termism. Israelis built a state and continue on with the settlement enterprise by grabbing when and where possible. It has survived and thrived by dealing with today’s reality, and abiding by Keynes’s advice that, in the long term, we’re all dead.

The Lebanese sense of the immediate can be salutary and their resilience is considerable. Shattered windows were rapidly repaired during the civil war, and people got on with life despite the calamities.

READ MORE: To understand Syria today, we must look to history

But, in such a world, no one has trust in the shape of the future – because today is all that matters. Business deals are unsure, there is no national planning, and all, including the mad and impulsive driving, reflects the uncertainty of rapidly shifting tides.

In theory, if Lebanese leaders were to attend to their citizens’ needs instead of lining their pockets or pursuing regional schemes, then matters could improve.

Citizens could also wrench a result from their recalcitrant leaders by caring more for the whole than for sectarian fragments. However, the energy and attention necessary for such efforts is unavailable because all are consumed by the toils of the day.

Meanwhile, the allure of Karagoz remains. The powers pulling the strings don’t care much about Lebanon’s welfare, and the cheque they provide may abet disaster. While political talks are repeated, Lebanon falls apart, rubbish fills the air, not just the streets, and illness is on the rise.

The Lebanese suffer from regional agendas in which they are little but pawns while their leaders enjoy the fruits of a dying region, and yet many remain beholden to this state of affairs. Karagoz, the shadow of a shadow of a reality, continues to thrive while real life just keeps piling up until a sure and sad breaking point. 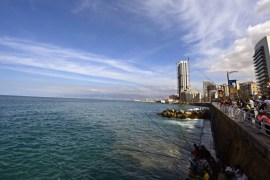