Since its establishment in late 2012, the de facto autonomous region of Rojava in northern Syria has attracted the attention of European leftists, mainly because of the influence of Murray Bookchin’s theories about libertarian municipalism on the Kurdistan Workers Party (PKK) leader Abdullah Ocalan.

Ocalan’s writings gave way to a newborn political system in Rojava as the Syrian branch of the PKK, the Democratic Union Party (PYD), is in fact the driving force behind the institutions.

Bookchin envisioned a society founded on communalism and transnational direct democracy as an antidote to the bureaucratic nation state – a mission partially mirrored in the wording of the Rojava Charter of the Social Contract.

However, a balanced assessment of the achievements in this Syrian region should not overlook the grey areas, where there is still room for improvement against tribal, ethno-sectarian, capitalist and patriarchal structures.

For example, there is an emphasis on the equal political representation of all ethno-religious components – Arabs, Kurds and Christians being the most sizeable ones – an approach which some have applauded as “careful ethnic balance“, although it rather resembles the sectarian quotas adopted in Lebanon and Iraq.

The emphasis on ethno-sectarian identities is further echoed in the foundational statement of the Federal Democratic System, which is based on the representation of “community components”.

As Syrian intellectual Jad Karim Jibai pointed out: “Nobody knows how an ‘entity’, that is ‘peoples and communities’ (ie, clans and ethno-sectarian communities), could transcend national borders.”

In other words, the insistence on these communitarian boundaries betrays the libertarian transnational aspirations.

This contradiction is also evident from the authority bestowed upon tribal leaders. For instance Shaykh Humaydi Daham al-Jarba, the head of a tribal Arab militia and an outspoken supporter of the Assad regime, was appointed as the governor of the Jazirah canton in Rojava in 2014.

His son is now the commander of the al-Sanadid Forces, one of the main Arab militias fighting alongside the PKK-led Syrian Democratic Forces (SDF), that is to say Rojava’s army. The prominence of tribal leaders preserves their role as inhibitors of social change.

While the PKK has officially renounced its demands for an independent Kurdistan, it would be myopic to ignore the ongoing military expansion of the territories controlled by the Kurds, whose outcome means the de facto fragmentation of Syria along new borders.

Considering the rejection of the idea of nation-states in the Rojava declaration, this appears to be a move in the opposite direction, regardless of the threat posed by enemies in war times.

Moreover, private property is officially enshrined in the Charter, a provision that safeguards the privileges of landowners, while encouraging them to invest in agricultural projects sponsored by the Rojava authorities.

In order to reflect Bookchin’s views on how libertarian municipalism is expected to replace private property, the text should have been phrased quite differently.

If this Syrian region is to stand as an alternative to capitalist federalist Iraqi Kurdistan, a significant effort is also needed to familiarise its inhabitants with its structures.

When I was living in Rojava with a Syrian Kurdish family in 2013, most of the people I met were busy dealing with the rising cost of living and had no idea of the difference between federalism and libertarian municipalism.

People’s Houses (Mala Gel in Kurmanji), communal places where people gather, were already open, but I discovered their existence by reading the signs at their entrance, not because people mentioned it to me.

OPINION: Can we criticise the Kurds?

Another threat posed to democracy and decentralisation in Rojava is the PKK’s Stalinist legacy. The party claims to have shifted towards anarchism a long time ago, but some traces of its authoritarian upbringing are still visible in its “Syrian lab”: Ocalan’s portraits are ubiquitous, often accompanied by the slogan “There’s no life without a leader” (be serok jiyan nabe).

The PKK supporters are not generally inclined to accept criticism of Ocalan, who has been often portrayed by his former “comrades” as a despot.

When I asked a PKK chief in charge of supervising education in Amuda, northern Syria, why they had decided to hang a party leader’s portrait in schools, he told me that to him Ocalan was more a philosopher than a political leader.

Unfortunately, in Rojava, Ocalan looks like the only philosopher allowed to be portrayed everywhere.

I witnessed the PKK’s worst crackdown on Syrian dissidents so far on June 28, 2013, in Amuda, after the party’s armed forces had killed six protesters the night before.

It was only the main episode in a long string of violations committed against dissidents and journalists.

Still, as a foreign journalist in Rojava, I faced almost no restrictions and was never at risk of being kidnapped, especially compared with some opposition-held regions in Syria.

Nevertheless, the way the PKK deals with dissent is worrisome for any movement claiming to have established a democratic confederation.

The role of women

Lastly, women empowerment is undoubtedly part of the Rojava agenda. Civil marriages in Syria were introduced here thanks to a new legislation, a woman’s testimony was made equal to a man’s in spite of widely accepted Islamic norms, and the presence of women is encouraged in both political and military institutions as nowhere else in the country.

However, the militarisation of women and society at large is an alarming trend enforced through conscription and sanctioned by the social prestige enjoyed by the fighters’ families. In fact, only the “martyrs”‘ pictures are “venerated” with the same devoutness of Ocalan’s icons.

Consequently, women become worthy of respect as long as they turn into men of arms and sacrifice themselves on the battlefield.

Some would defend this militarised system of values with the current need to defend Rojava, but to assume that even minors should be forcibly enlisted to ensure the survival of a social utopia is a disturbing argument to say the least.

It should also be noted that European leftist solidarity cherry-picked the so-called Rojava revolution, whereas other revolutionary theorists, such as Omar Aziz in Damascus, went completely ignored, because they were neither endorsed by one of the best equipped militias in the region such as the PKK, nor did they phrase their social utopia according to a libertarian terminology.

Yet, the horizontally structured self-governing bodies that were envisioned in Aziz’s writings and established in opposition-held areas between 2012 and 2013 bear some similarities to the Rojava communes – with the difference that the latter were spared from government shelling.

The Rojava “lab” is definitely a politically innovative experience, but the social utopia narrative should not overlook the reality on the ground and its contradictions.

Andrea Glioti is an Arabic-speaking freelance journalist and a research consultant covering the Middle East. 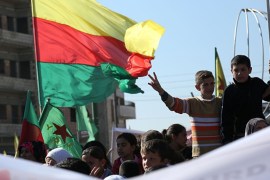 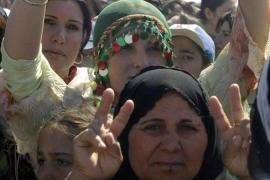 The rise of Syria’s Kurds

Kurds declare autonomous zone in northern Syria despite some objections from brethren in Iraq.