On August 20, a suicide bomber, reportedly aged between 12 and 14, carried out a deadly attack at a wedding party in the southeast city of Gaziantep in Turkey.

The Islamic State of Iraq and the Levant (ISIL, also known as ISIS) remains the prime suspect, though it hasn’t formally claimed responsibility. Nor, however, has it yet claimed responsibility for any of the attacks it has carried out in Turkey. The incident left carnage in its wake, with 54 dead and 94 injured.

In recent years, Turkey has been one of the primary targets of ISIL attacks. But these attacks can be divided into two categories: The first category consists of attacks that target mostly non-Turkish groups, or at least aren’t exclusively aimed at Turkish targets.

The Sultanahmet, Istiklal Street, and Ataturk Airport incidents all fall under this first category of attacks. German tourists, a largely Israeli group and other international targets, and by extension the Turkish citizens around them as well, were the victims of these attacks.

The rationale for these attacks vary and may include Turkey’s overall Syria policy, its support for the Syrian opposition, its cooperation with the United States within the framework of the anti-ISILcoalition, and potential cooperation with Russia against the group after the recent mending of ties between the two countries.

IN PICTURES: Mourning in Gaziantep

Moreover, as ISIL is squeezed in Syria and Iraq, it seeks more desperately to establish a presence elsewhere.

Paradoxically, the more ISIL is squeezed at home, the greater the level of security threat that it poses for Turkey, as some displaced militants will seek a presence elsewhere, while the group as a whole will aim to assert that they are still a force to be reckoned with through engaging in deadly terrorist activities.

These types of attacks dovetail with the present ISIL strategy of going after enemies worldwide instead of confining itself to certain territories in Iraq and Syria, which are shrinking at present.

The second category is composed of attacks focused more on Turkey, aiming at causing an earthquake by hitting Turkey’s ethnic and sectarian faultlines.

Fomenting ethnic tension seems to be one of ISIL‘s main goals in Turkey. Examples of this type of attacks include the Suruc, Diyarbakir and Ankara train station bombings. The recent Gaziantep attacks also fit into the framework of this second category of ISIL attacks.

In this type of attacks, ISIL has often targeted Kurds within the sphere of the Kurdish nationalist movement.

These attacks are directly related to ISIL‘s fight with Kurdish groups in Syria and Iraq. The Syrian Civil War and the fight between ISIL and the Kurdistan Workers’ Party (PKK), and it Syrian offshoot YPG, have been major radicalising factors in Turkey.

The derailment of the Kurdish peace process in July 2015 and ensuing low-intensity warfare has further added dynamism to this process of radicalisation.

This is an alarming trend that needs to be reversed. Compared with the first category, the attacks in the second show more signs of durability, leading to long-term consequences.

With these attacks and related political calculations, ISIL appears to be aiming to change from being a foreign terrorist threat to becoming a domestic one, with far-reaching and frightening implications.

Inside Turkey, ISIL has moved from its previous pattern of random and sporadic attacks to a more systematic one.

While attempting to settle its accounts with the PKK in Turkey – arising from the conflict in Syria and Iraq – it also tries to capitalise on anti-PKK resentment in certain Kurdish quarters.

A significant number of the ISIL suicide bombers who attacked Kurdish gatherings are also ethnic Kurds.

The priority should now be to contain and reduce the level of threat that ISIL is able to pose, in the hope that this will pave the way to reducing its capacity to cause harm in the medium to long term.

This intra-Kurdish rivalry isn’t new. In the 1990s, a group called Kurdish Hezbollah, which is widely believed to have been encouraged by elements within the “deep Turkish state“, engaged in a bloody conflict with the PKK.

After the capture of the PKK leader Abdullah Ocalan in 1999 and the PKK’s subsequent declaration of an indefinite ceasefire, Turkey heavily cracked down on Kurdish Hezbollah and killed its leader in 2000.

Remnants of this group later entered civilian politics through the creation of Huda-Par, in fierce opposition to the PKK and its political affiliates.

Since Huda-Par also champions Kurdish national rights, the nature of its disagreement with the PKK has acquired more of an ideological colour than a national one.

The PKK’s dominance of the Kurdish political scene, its heavy-handed and authoritarian style coupled with its top-down project of secularisation has created further grievances among Kurdish political Islamists.

These grievances are ripe for radicalisation, and ISIL is aware of this potential and is actively trying to exploit it.

In a sense, ISIL is attempting to position itself within existing intra-Kurdish feuds. Hence, its activities in Turkey are now becoming more systematic and focused on certain groups.

There is no quick fix for dealing with the ISIL threat in Turkey. The country will remain vulnerable and exposed to ISIL attacks, given its proximity to the birthplace of the armed group and its main bases in Iraq and Syria.

This threat is generational and requires a multifaceted approach. In this respect, the priority should now be to contain and reduce the level of threat that the group is able to pose, in the hope that this will pave the way to reducing its capacity to cause harm in the medium to long term.

In the meantime, besides law-enforcement operations and de-radicalisation initiatives, the political class and society at large should demonstrate resilience and unity.

In the knowledge that these attacks are aimed at creating opposing political and societal blocs, the government and opposition should maintain their unity and cohesion that they have displayed in the face of the failed July 15 coup attempt – but the government should also bring in the pro-Kurdish Peoples’ Democratic Party as well.

Instead of being a mere tragic sideshow, this attack should act as a further reminder of how important it is to seek a political settlement of the Syrian crisis and the Kurdish issue in Turkey. 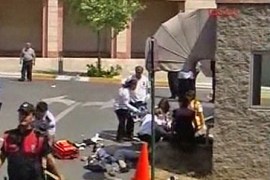