On August 1, the United States began a new military air campaign against the Islamic State of Iraq and the Levant (ISIL, also known as ISIS) in its stronghold of Sirte in Libya. This has come as an unsurprising move.

The bombing was in response to the request of the Government of National Accord (GNA), whose Prime Minister Fayez al-Sarraj had previously said Libya did not need foreign intervention.

In fact, for many this is exactly the expected scenario: the GNA – set up by the United Nations and wanted by the West – is turning out to be, among other things, an instrument to legitimise military strikes against jihadist groups.

Now that the US may have opened the Pandora’s box, multiple issues are springing up: How long is the military intervention going to last? What is going to be ISIL’s response? What about other jihadists? What will be the role of General Khalifa Haftar and his leading military force in Libya?

It is quite notable that this is not the first US strike against ISIL in Libya. On February 19, the US carried out air strikes on an ISIL camp in Sabratha in concert with the UK, France and Italy, killing dozens, Tunisians for the most part.

In the past few months, the US has beefed up surveillance of ISIL in Libya to gather intelligence, most likely in preparation for air strikes. In the meantime, US Special Forces have been stationed at two outposts in the country.

Special forces from other countries have also been deployed in the country. UN Envoy to Libya Martin Kobler has already confirmed the “open secret” that France has been operating in the country along with the US.

Additionally, British Special Forces have been fighting alongside the Misrata Brigades against ISIL and, more surprisingly, the Jordanians have also joined.

While it is undeniable that ISIL has suffered military defeats in Sirte, it could be employing a tactical retreat and go underground to fight an asymmetrical war consisting of suicide bombings and car bombs, following its recently changing tactics in Iraq and Syria.

Just two weeks ago, France suffered its first casualties in Libya. Three Special Forces soldiers were killed when their helicopter crashed because of a “mechanical failure”.

A far-fetched explanation of France’s mission from General Haftar’s spokesman was that France had been gathering intelligence on Boko Haram, after some Malian members had arrived in Libya.

In any case, what ensued after the announcement of the death of the three French soldiers is telling, and could spell trouble for the US as well.

Libya’s mufti called France’s actions a declaration of war, and jihadist groups such as Ansar al-Sharia and al-Qaeda in the Islamic Maghreb condemned and threatened France. There were also massive demonstrations in Tripoli against France’s presence in the country.

Will the US follow the same fate now? The difference with France is that the US attacked ISIL targets at the request of the GNA, but for many Libyans the attack was still a foreign intervention.

Indeed, on the domestic front, the GNA still has to gain recognition and earn its legitimacy from many – including the powerful eastern tribes and, last but not least, the most powerful man in the country, General Haftar.

OPINION: ISIL may be in crisis, but so is the coalition

That is where the real conundrum lies: Most Western nations – along with Russia and China – support and work with the only viable military force, General Haftar’s, which is at odds with the GNA.

The fighting between various groups is still very acute: Libya’s new defence minister recently survived an assassination attempt by a car bomb while one of his guards was wounded.

Sadly, one can expect more political assassinations in the next few months in Libya, especially against the GNA officials.

Now the question remains: What is the real status of ISIL in Sirte? Even the estimated number of ISIL fighters in Libya has varied widely over the past few months.

The figure varied from 2,000 to 10,000, and now it has supposedly been halved. The inaccuracy tells us that this is a game of guessing – nobody actually knows for certain.

In any case, it seemed too easy when Libyan forces claimed to have taken Sirte back, leaving ISIL reportedly with no more territory in the country.

If that was really the case, why would the US be called to the rescue and launch air strikes against ISIL?

While it is undeniable that ISIL has suffered military defeats in Sirte, it could be employing a tactical retreat and go underground to fight an asymmetrical war consisting of suicide bombings and car bombs, following its recently changing tactics in Iraq and Syria.

ISIL will certainly use the US air strikes as a propaganda tool to draw more foreign recruits to fight against the “infidels” that have come once again to Muslim lands.

So far, ISIL’s recruitment efforts in Libya from the West have been disappointing. Allegedly only 20 British and a handful of French joined their cause. This may quickly change if ISIL makes Libya even more of a focal point of its strategy.

After the disastrous 2011 Libyan intervention that yielded the current situation, the US has to be careful of the unintended consequences of a new military campaign.

Especially at a time when even one of its top generals recognises that its current strategy against ISIL in Libya makes no sense. 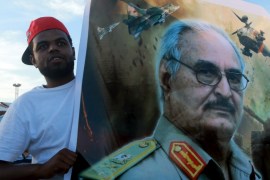 When is the next Libya intervention?

If the US does decide to bomb Libya again, it will be doing so effectively in alliance with Egyptian foreign policy.