The defining memory of India’s latest session of parliament will not be animated exchanges between politicians, egregious speeches or celebrations at getting important laws passed.

It’s bound to be the image of Rahul Gandhi, son, grandson and great-grandson of prime ministers, apparently sleeping in the second row of the opposition benches as an important debate raged on.

His party colleagues fell over themselves to protect the 46-year-old Gandhi scion, claiming that he was actually checking his mobile or resting his eyes after journeying to parliament in the summer heat.

But whether he actually nodded off or not was immaterial: The image was flashed on TV screens across the country, the media had a ball and Rahul was in the doghouse again.

The gaffe underlined fears that Rahul – who could become prime minister in the unlikely event of his party, the Indian National Congress, winning in the next general election, which is scheduled to take place in 2019 – is an unsuccessful politician and owes his place only to his lineage and the support of his Italian-born mother, Sonia.

And it should raise questions about whether the party must abandon the Rahul experiment and look outside the Gandhi family for a leader, as they have done successfully twice in the past.

Sonia and Rahul serve as president and vice president of the Indian National Congress, a 130-year-old party with several bright people too cowed to voice their own political ambitions in the face of the Gandhi family’s dominance.

Sonia wielded plenty of power behind the scenes when the quiet economist Manmohan Singh was the prime minister until 2014. It’s widely expected that she will step aside soon as head of the party in favour of Rahul.

Analysts say the National Congress party should identify leaders in their sixties to groom for the job. It has traditionally had strong leaders in the provinces, but the loss of election after election there has hit hard.

As for Rahul, the term “reluctant politician” is the most charitable one used to describe a man lampooned gently in the nation’s newspapers and mercilessly in a social media space dominated by the Hindu right.

It’s been a rough ride. As a 20-year-old, he had to confront the violent death of his father Rajiv Gandhi in 1991, blown up by a Sri Lankan Tamil suicide bomber.

Seven years earlier, his grandmother, Indira Gandhi, fell to a hail of bullets from her Sikh bodyguard. Security considerations forced him to adopt a false name – Rahul Vinci – while he was studying at the University of Cambridge.

He remained on the fringes of Indian politics, and is thought to have dissuaded his mother from becoming prime minister in 2004.

Rahul sets great store by creating a better party organisation for Congress, a behemoth with millions of members that is plagued by in-fighting.

But Rahul and Sonia are said to be aloof when normal Congressmen go to meet them in Delhi, preferring a charmed inner circle.

“He practises a sort of elite subalternism,” says Badri Narayan, a professor at the Jawaharlal Nehru University. “He has affection for the common man, but he’s surrounded by various layers.”

OPINION: What lies behind the corrosive effect of dynasty?

He is also a poor performer on stage, pontificating ineffectually about women’s empowerment and the idea of India while Modi, a seasoned political campaigner, runs little rings around him.

A television interview with top-ranked TV channel Times Now before the 2014 elections was an unmitigated disaster.

Under Rahul and Sonia, the Congress has ceded part of its centre-left space to the Aam Aadmi party, a tiny but ambitious outfit that runs the local government in Delhi and is led by a former tax official.

In any case, under Modi, India has lurched to the right. Even if the BJP has won brickbats for nastiness to minorities and the retrograde views of some of its politicians, Modi retains his personal popularity.

Critical year for the National Congress

Next year, the province of Uttar Pradesh – which has the same number of people as Brazil crammed into one-fortieth of the area – elects a state government. If Congress is wiped out there, the Rahul question will arise again.

Congress should break the embarrassing silence bound to ensue, and look back 25 years, when the freshly widowed Sonia asked the dour intellectual Narasimha Rao to become Congress’ prime minister candidate.

Rao chose Manmohan Singh as his finance minister, and the two embarked upon reforms that set the country on the road to becoming what it is today: the fastest-growing major economy.

The next time around Sonia opted for the meek Singh as prime minister, and that paid off until corruption in government – and a Modi wave – cost the party power.

Analysts say the party should identify leaders in their sixties to groom for the job. Congress has traditionally had strong leaders in the provinces, but the loss of election after election there has hit hard.

It needs to build up a few good men who could be called upon to lead the party at the centre.

To understand why Rahul is still in the fray, one has only to look at the beam on Sonia’s face when he speaks in parliament.

But good political judgement would demand that Sonia finally give up on him when Uttar Pradesh is lost.

Or start praying for an accident of history when the BJP’s excesses build a backlash that leaves Indians searching for an alternative, any alternative.

Sitaraman Shankar is an Indian journalist based in Mumbai. 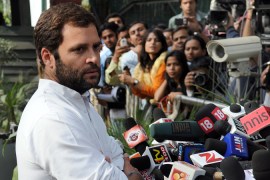 Instead of focusing on the fish’s eye like the legendary Arjuna, Gandhi must see it whole to address all ills. 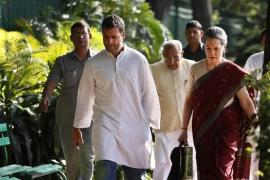 Crushing loss in country’s elections has put the dominant role of the Gandhi dynasty within the party under scrutiny.

The myths of British imperial benevolence and Palestine