Several conflict trends are simultaneously at play in Syria. The first is the retreat of the Islamic State of Iraq and the Levant (ISIL, also known as ISIS) across the country and the second is the unpredictability of events in and around Aleppo where regular regime gains have seemingly been stunningly reversed.

Both trends reveal the many layers of ongoing fighting. While all fighting has international, regional and local components, there are two central conflicts that are making the weather in the country.

One is between the Syrian regime and its allies against a new, more united opposition coalition where Aleppo has become the jewel in the crown.

Meanwhile a far larger coalition – technically with the United States, Russia and the regime all on the same side – is aligned against a struggling ISIL.

ISIL on the retreat

Next month will mark the second anniversary of US “Operation Inherent Resolve” against ISIL in Syria.

The US-led coalition had launched more than 14,000 air strikes against ISIL targets in Syria and Iraq during that time, causing an estimated 45,000 casualties for the group – this is according to a Pentagon that has previously avoided getting dragged into doing body counts.

With recruitment routes more regulated, its sources of funding badly mauled and the skies above them buzzing with deadly aircraft, the resolve of the nascent caliphate is under more pressure than ever before.

This victory – won despite ISIL resorting to trying to hide behind thousands of human shields – is the latest in a number of successes against the group across Syria and Iraq, as Abu Bakr al-Baghdadi’s forces have lost over a quarter of their controlled territory over the past 18-months.

It is hard to overestimate the importance of Aleppo for those engaged in fighting over it. It's so important that opposition groups have taken resource and manpower from elsewhere and have demonstrated a rare unity in throwing themselves into relieving the regime siege.

Eyes now look hungrily towards the ISIL “capital” Raqqa, whose water supply was recently cut off by Russian bombing.

For Barack Obama in particular, following Donald Trump’s accusations that he “founded” ISIL, it would be a sweet reward if US-backed forces were the ones to take down the black flag from the city.

Meanwhile, in Aleppo, recent history has been marked by inconsistent deadlock in military terms and consistent death in civilian terms.

Many feared that once the opposition-held east of the city was cut off in July, the scene was set for a long-term siege.

However, such is the strategic and symbolic importance of Syria’s largest city that a concerted opposition counterattack was able to punch through regime lines amid intense fighting.

We now see the spectre of a wider siege against the west of the city bringing two million civilians in total into the crosshairs of misery.

It is hard to overestimate the importance of Aleppo for those engaged in fighting over it. It’s so important that opposition groups have taken resource and manpower from elsewhere and have demonstrated a rare unity in throwing themselves into relieving the regime siege.

The response from the regime and its allies has been ferocious, and reports of incendiary and chemical weapons have been reported while hospitals, in particular, are taking a serious beating with one hit every 17 hours.

The backsliding in regime gains around Aleppo has seen greater Russian investment in the conflict, although you wonder if they despair with their unreliable partner’s loss of the Ramosa artillery base.

Moscow has been forced to deny moving nuclear weapons to Syria but will be converting the Khmeimim base into a permanent site.

The failure of the ‘dialogue’

Another aspect of the Syrian conflict that has been highlighted by this apparent decisive phase in Aleppo is the almost complete marginalisation of the United Nations.

The Staffan de Mistura process promised so much, but its targets and deadlines have been rendered meaningless by events on the ground.

While all sides talk a good game about their willingness to engage in dialogue, they all see the potential for getting what they want through military means – which is bad news for the people and buildings that make up Aleppo.

To understand the Syria of today, you have to peer through the thick fog of war and have eyes simultaneously on the different actors and their very different conflicts. 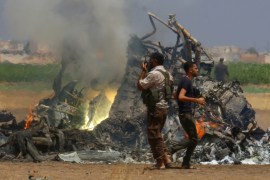