When military vehicles blocked the entrance to the Bosphorus Bridge in Istanbul on July 15, Erol Olcak was at home with his family.

Soon Turkish citizens realised that this was a coup attempt, and the only way thwart it was to take to the streets and express the will of the people.

Olcak, living near the bridge, took his 16-year-old son and rushed out the bridge to resist the military forces. They had no guns, and nothing to shield them from any attack.

It was with profound sadness and shock that we learned he was killed by the traitors within the first hours of the coup attempt, only because he stood for what he believed in: freedom, democracy and the will of the people.

Olcak was not only a close friend of President Recep Tayyip Erdogan, but also a strategic and important figure in his political movement for more than 20 years.

As the party publicist, he prepared all the election campaigns that were pivotal for the Justice and Development Party’s (AK party) success.

He was creative and bold, planning one of the best campaigns in the political history of Turkey. So why would Erdogan let him die?

This is a very surprising question, and it may sound preposterous. But there is a conspiracy theory being circulating in the social media that it was Erdogan who initiated the coup against himself.

Even putting these words on paper feels ridiculous but some international media have already picked up on it.

Why he would do that, you might ask. Well, according to this claim, he’d do that to consolidate more power; as if he is not a leader who has not lost a single election in the past 15 years.

The brutality of the coup attempt, bombings of strategic institutions of this country, loss of innocent lives remain largely untold.

For a deeper understanding, we should remember what happened on that fateful night. A faction within the Turkish Armed Forces broke the order of command chain and attempted a military coup in Turkey.

Istanbul and Ankara were the focus: in Istanbul, the Asian entrances of the Bosphorus and Fatih Sultan Mehmet bridges were blocked by military vehicles, and the Ataturk International Airport and Istanbul Police Force headquarters were surrounded.

The attacks included civilian targets as well. The Turkish state broadcaster TRT offices in Istanbul and Ankara were raided, and a statement declaring the coup was read live on TV, stating that the military had seized power, and martial law and curfew would be enforced throughout the country.

The Turksat satellite and Turkish Telekom offices were also attacked. Turksat was bombed so that television broadcasts to the entire country could be cut. The coup plotters had only one aim: to cut off all the communication channels of the entire country.

The president and the prime minister appeared on national TV channels, defying the attempt and calling citizens out to the streets to resist it.

By then people had already started to gather in protest. Just as Olcak, who was one of the first to reach the bridge, nobody had any weapons – just their bodies and voices against the coup attempt.

The peaceful resistance was, however, met with gunfire and bombings. At the end of this tragic night, the country lost 241 civilians, and 1,537 more were injured.

The conspiracy theorists also refer to the people who took to the streets as Erdogan’s “sheep”.

One wonders how these mere “sheep” could have stood up against tanks and would not move one inch when helicopters kept firing from above.

Or how President Erdogan could let fighter jets bomb the parliament while there were many MPs from all parties inside.

The failure of the international media

While such baseless and illogical claims found expansive coverage in the international media, what actually happened that night seems to not interest them as much.

The brutality of the coup attempt, bombings of strategic institutions of this country, and loss of innocent lives remain largely untold.

Most failed to stand with Turkish democracy and its people, rather preferring to follow a “wait and see” policy.

Instead of a straightforward and unequivocal condemnation of the coup attempt, what we mostly see is politicised comments and baseless accusations.

There are even opinion pieces implying that a military coup would be better than the rule of democratically elected officials, while little was said about the true perpetrators of the coup and the terrorist network lying behind it.

Thankfully, all the Turkish media – regardless of their political stance – resisted the coup, broadcasting the truth and keeping the citizens aware and alert of the threat our country faced.

The stance of most international media, on the other hand, comes across as a big insult to the Turkish people who repelled a brutal coup attempt.

In the end, the peaceful resistance of ordinary people proved to be stronger than bombs and guns.

Erol Olcak and his son were among the first martyrs of this coup. Their memories and sacrifice will always be remembered and cherished.

People are still in the streets and squares, continuing the resistance, proving the martyrs did not die in vain.

What began as a dark and tragic night ended up as the day when ordinary citizens saved their country and democracy. 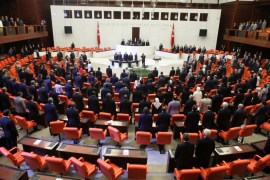