If you must read Dennis Ross’ Doomed to Succeed: The US-Israel-Relationship from Truman to Obama, take some sedatives because you are doomed to scream in agony.

A survey of seven decades of US diplomacy towards Israel, the book is a reflection of the author’s own mindset as much as it is about the mindset of those who manage, nurture and protect the “special relationship” between the United States and Israel. And it’s nauseating.

Ross doesn’t hold back. After serving four decades in successive US administrations, he is clearly eager to set the record straight, not only about Washington’s approach to Israel, but about his unshaken loyalty to the “Jewish State”.

Like Colonel Nathan Jessup in A Few Good Men, Dennis the menace is eager to reveal his role on behalf of Israel, and the book is just a way of leading him to his desired destination.

It surpasses his last book The Missing Peace, to reveal not only his personal experiences but also his inner thinking. It is hypocritical and avowedly one-sided.

The book is set up to demonstrate three main points:

2 It follows that the US is right only when it sides with Israel, and also defends its belligerence, and rewards it for its aggression and obstruction.

3 American leaders don’t learn from the lessons of their predecessors who repeatedly, naively and erroneously give weight to Arab positions on Israel, when according to Ross, Palestine is not the Arabs’ priority.

This is no surprise coming from Ross. After all, he is the head of the American Israeli Public Affairs Committee’s auxiliary think-tank, The Washington Institute for Near East Studies, and co-chairman of the Iran Task Force of the warmongering Jewish Institute for National Security Affairs, a group that promotes relations between the US and Israeli militaries and has been critical of the Obama administration’s nuclear negotiations with Iran.

Ross reviews the record of each administration's dealings with Israel to prove the above points, and when the record doesn't support his claim, he distorts it through acrobatic selectivity and subjective interpretations.

What is shocking is how far he has gone to prove his point.

Ross reviews the record of each administration’s dealings with Israel to prove the above points, and when the record doesn’t support his claim, he distorts it through acrobatic selectivity and subjective interpretations.

For example, when President Jimmy Carter accuses Israeli Prime Minister Menachem Begin of deceiving him, Ross insinuates that Carter misrepresents the record, or at best has a poor memory.

When President Ronald Reagan accuses Begin of lying to him, Ross makes the case for “lost in translation”; the president simply misunderstood the Israeli premier.

Remember, Israel is always right and its leaders are holier than thou.

So when Begin’s successor, the obstinate, obstructionist and deceiving Yitzhak Shamir lies even more, Ross dances around the issue to show that Reagan was perhaps harsh in his interpretation.

Likewise, when President George HW Bush is angered by a lying Shamir, who is widely known to have done everything in his power to torpedo the convening of the 1991 Madrid International Peace Conference, Ross explains how the Bush administration didn’t appreciate the Israeli psyche.

This line of reasoning is prolific throughout the book: America just doesn’t understand the complexity of Israel’s political psychology and is therefore inconsiderate to its needs.

While they have proved supportive of Israel, they just don’t know how to babysit the insecure state.

ALSO READ: On Netanyahu, peace and the West

But Ross is comfortable recalling how American leaders have mistrusted the Palestinians because in his eyes Yasser Arafat was the ultimate liar – the missing piece in Ross’s equation of peace. No attempt at contextualising or interpreting the psyche of the Palestinians who have been dispossessed and occupied for decades.

Like any book that recounts diplomatic history without the necessary wider strategic context, Doomed to Succeed is doomed to fail in explaining the contradictions between rhetoric and policy. When Ross does contextualise, he is deliberately selective, and notably to push for a dubious point he is making.

Considerate to the undeserving Arabs

For example, Ross argues that the Arabs have generally got their way with Washington’s leaders at Israel’s expense.

He claims Washington sold the Arabs sophisticated weapons despite Israel’s objections, while the US repeatedly denied Israel weapons they asked for, jeopardising Israel’s security.

The delusional Ross doesn't see how regional hostility to US complicity with Israel has been a constant rallying cause for violent extremist groups.

Nowhere does he explains how, thanks to its European and American backers, Israel has defeated and rolled back its Arab enemies in each and every war.

Or, that the US suspended arms only when Israel used US weapons offensively in contradiction to the conditions of their sale. Or for that matter, that the Arabs buy these expensive weapons, while Israel pockets them.

In one astounding case, Ross recalls how during a National Security Council debate on providing Israel with more sophisticated weapons, one official said that the timing wasn’t right (Israel was being bad again) and besides, it already had enough weapons to defeat all its Arab neighbours combined.

But Ross, Israel’s knight in shining armour, wouldn’t have any of it. Furious at his colleague’s logic, he reprimanded him for not understanding the Arabs or for that matter, deterrence!

Basically, to deter the Arabs you must make it clear that you can obliterate them beyond defeat, and to scare them shitless in the process, in order to ensure they make no demands.

No such deterrence of Israel is needed even though it basically initiated most of the wars with the exception of the 1973 war when the Arabs tried to roll back Israel’s 1967 gains. (I realise this point will draw counter arguments, but I shall leave that for another day.)

At any rate, I honestly don’t have the nerves or the patience to comb through all of Ross’ falsehoods, distortions and spins point by point. So flagrant are his claims, refuting them here requires the kind of language that is not publishable.

In short, it is true that a number of Arab leaders did look for US protection and help in curbing the aggression of its client state, Israel. And yes, Israel was eager to be America’s regional and strategic asset but only on its own terms.

At the end of the day, Israel created far more trouble for the US in the Middle East than it provided solutions and opportunities. Consequently, the US created greater trouble for the region. Ariel Sharon’s reoccupation of the West Bank in 2002 and Bush’s War in Iraq in 2003 are good examples of the Israelification of US policy in the region.

No, not everything can or should be blamed on the US, Israel or their complicity in the Middle East region. But judging from the opinion polls, including the so-called friendly states, the majority of the Arab public, have consistently seen the US and Israel (perhaps less so during the Obama administration) to be the leading menace to regional stability and security.

The delusional Ross doesn’t see how regional hostility to US complicity with Israel has been a constant rallying cause for violent extremist groups. And that official policy might reflect the narrow interests of the ruling elites, much of today’s problems in the Middle East are caused by neglecting the Arab public opinion.

Thanks to Israel, The US’ “strategic asset”, and to Israel’s own strategic assets in Washington, the likes of Ross and his Zionist pals who have influenced and eventually come to dominate US policy-thinking towards the Middle East beginning with Ronald Reagan, the US-Israel relationship has been elevated to new highs. And why ultimately, for those same reasons, it is doomed to backfire against both.

That is unless other voices, Jewish and other, continue to rise and advance, as did Bernie Sanders and his supporters in recent months. We should all take comfort in the fact that the influence of these moderates within the American establishment and the Jewish community, while modest is also growing. 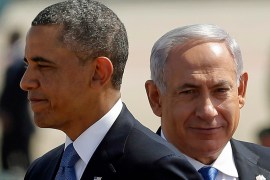