The attack near the Israeli army headquarters in Tel Aviv that left four Israelis killed is unjustifiable. But no matter how many times this and other attacks on Israelis and Palestinians are condemned, we can’t break the cycle of violence by having better security.

Without a contextual look at the conflict we can’t begin to find solutions. Whether the act was ordered by some political or militant group or a lone wolf attack, it should be seen within the context of the violence in 2016 alone, which left dozens of unarmed Palestinians dead.

Revenge and collective punishment by either side is not an answer, but neither is complacency and denial.

A reporter once asked former Israeli Prime Minister Golda Meir to delineate the borders of Israel. She replied that they are wherever an Israeli soldier is deployed.

So long as Israeli soldiers are deployed on the other side of the green line, the responsibility for war and peace is in the hands of Israel.

Denying Palestinians their inalienable right of self-determination is not a solution. Israelis should enjoy a normal life but they can’t expect to do that while denying it to others under their control.

You can’t keep the Gaza Strip under a crippling siege for years, allow right-wing settlers to act with impunity throughout the occupied West Bank, continue Judaising Jerusalem and expect the other side to be quiet about this.

Human Rights Watch calls what is happening in the occupied territories “grave crimes”.

In a report issued on June 6, they called on the International Criminal Court to investigate these crimes. “After nearly a half-century of impunity, it’s time that those responsible for some of the gravest crimes, whether against Palestinians or Israelis, pay the price,” said Sarah Leah Whitson, Middle East director.

The culture of impunity

According to Israeli human rights groups, in the past few months alone Israeli soldiers have executed Palestinians at least in two occasions. The evidence has been captured by video footage.

Israel has announced that more settlements will be built in Jerusalem where right-wing radicals continue to rampage.

Without a political horizon, the Palestinian public is depressed, desperate and totally frustrated.

A West Bank settler who was detained after allegedly being behind the killing of three Palestinian family members was released.

Furthermore, Avigdor Liberman, who has publicly called for beheading Palestinians, has become the defence minister, while offers for peace talks by Cairo and Paris have been scuttled by the Israeli political establishment.

Israeli Prime Minister Benjamin Netanyahu said that Israel will live “forever by the sword,” choosing military confrontation and occupation instead of political accommodation.

For decades, Palestinians have been searching for any mechanism that can rid them of military occupation that the United Nations Security Council called “unacceptable” back in 1967.

This is an illegal occupation coupled with an illegal settlement enterprise. And all serious efforts to negotiate an end to the occupation have frustrated the Palestinians (PDF).

Without a political horizon, the Palestinian public is depressed, desperate and totally frustrated.

They blame their leaders for leaving them in this neither-peace-nor-war limbo for decades. And they are left alone in their struggle to shake up complacent Israeli public opinion. This is the kind of frustrating environment that motivates individuals who carry out these acts.

For years Palestinians have tried armed struggle, diplomacy and various methods of the Intifada.

Stones failed in the First Intifada to shake up the occupation. Suicide bombings resulted in the construction of walls.

OPINION: Rewriting the history of the peace process

Feeling hopeless, Palestinians in the occupied territories have taken things in their own hands while supporters around the world put pressure on Israel, using tactics of nonviolent resistance. The Boycott, Divestment and Sanctions Movement (BDS) has been painted as some kind of anti-Semitic act.

If Palestinians can’t use violent or nonviolent resistance, what are they supposed to do?

Twenty years of talks since the Oslo Accords have produced no credible peace mechanism, while illegal settlers have tripled.

How can Palestinian leaders justify a return to direct talks without any guarantees? How can a new round of dialogue be productive when that time is used to build even more illegal Jewish colonies on the Palestinian lands?

In the eye of the Israelis, a perfect Palestinian is the one who sits at home, enjoys this “benevolent” occupation and wait upon the Israeli masters and occupiers to decide for him what his future should look like within this generous Israeli rule.

Without justifying it, the attack on Israelis in a Tel Aviv cafe reflects this frustration that Palestinians experience every day.

The only way to break this violent cycle is to accept what the world has long understood: that the occupation is not sustainable and it must be replaced by a state where Palestinians can exercise their rights in an independent, contiguous and sustainable state of their own. 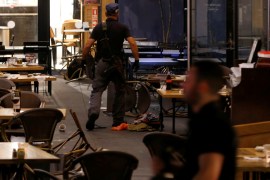 Israeli police say at least five people injured besides the dead in attack by two Palestinian men in Sarona Market. 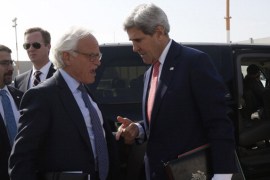