As blind panic swept financial markets in the early hours of Friday morning, the world woke to a debate that has been raging in Britain for years. While some ask how this happened, the pertinent question is what does this now mean.

As chairman of the British Parliament’s Foreign Affairs Committee, I have already heard many of our closest international friends and allies express their fears about an isolationist Britain.

However, assuming that Brexit means Britain is withdrawing from the world would be an egregious mistake. We must now cut through the hysteria to regain some perspective.

The United Kingdom is embarking on a fundamental recalibration of its integration with Europe. There will undoubtedly be change.

As Britain realigns its relationship with the countries and institutions of the European Union, we will now be more open and engaged with the world beyond its borders.

Our greatest challenge at the moment is the sheer scale of the job at hand. As my Committee recommended, our Foreign Office’s budget will now need to double, if not triple.

However, what makes us great will go unchanged. Militarily, our security will still be underpinned by our membership of NATO. We will still meet the spending targets of 2 percent of GDP on defence, and 0.7 percent on international aid.

Diplomatically, we still wield our veto as a permanent member of the UN Security Council. Short-term market volatility should not hide the fundamental strengths of our economy that underpin our position in the G7. With our universities, the BBC, and the British Council, our soft power is almost unrivalled.

Britain understands the importance of supporting our Arab partners in their time of need.

Regarding the Arab world, this means our continued contribution to the international coalition combating ISIL (also known as ISIS) in Syria and Iraq; our continued financial support to displaced and needy Syrians and Yemenis; our continued engagement in the International Syria Support Group; and our continued welcome for young Arab students to study in British universities, among many other things.

In terms of our trading relationships, the choice before the British electorate was simple: increased clout as a bloc of 28 countries, exercised through the consensual and thus cumbersome mechanisms of Brussels, or a nimble and independent trade policy executed straight from London.

The electorate has chosen and we now have the opportunity to realign our trade policy exclusively in the British national interest.

Britain understands the importance of supporting our Arab partners in their time of need. The collapse in tourism across North Africa is a British concern.

The pressures the refugee crisis has placed on the countries surrounding Syria is a British concern. That is why I have been frustrated by the protectionism of EU member states and the difficulties that posed in supporting our Arab friends.

Now Britain will be free of Greek, Italian, and Spanish lobbying that prevented us from increasing Tunisian olive oil imports to support the fragile North African economy.

Now Britain will be unencumbered by country of origin requirements that stopped us concluding trading arrangements with Jordan as they develop long-term economic solutions to the pressures of forced migration.

READ MORE: Brexit and the view from Spain

Our allies in the Gulf have long been facing the necessity of wide-scale reforms following the collapse of oil prices. In Britain they will have a committed partner joining them on the path of change, resolved to maintain the deep-rooted foundations of our relationships.

Some have foolishly begun celebrating what they hope is the demise of the Western order. To both our adversaries and our partners our message should be clear. Our commitment to the liberal values, principles, and causes we hold dear will only harden.

It is unthinkable that we might step away from the common struggle against extremism, abandon our commitment to uphold the rules-based international system, or relent in our support for good governance across the Arab world.

Furthermore, I believe it is even more important today for Britain to show its solidarity with our European partners in these causes. We must stand shoulder to shoulder with Italy in the search for truth and justice for Giulio Regeni’s family. We must fully engage with France’s Israel-Palestine peace initiative. We must continue to address the root causes of the migration crisis that has touched all of Europe.

As our partners in a region beset by crises know, the road ahead is never easy. But I relish the opportunity for Britain to rise to the challenge hand-in-hand with our Arab friends, so that we all prosper.

Crispin Blunt is the chairman of the British Parliament’s Foreign Affairs Select Committee. 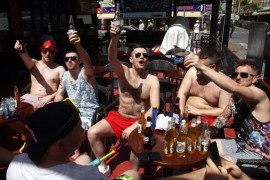 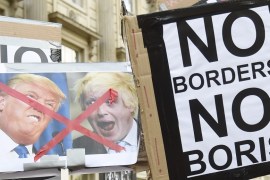 Can we mend the existential fault line rupturing our continent, or are we witnessing its subliminal atomisation?