After all, England has dominated Britain for centuries. It accounts for 85 percent of its population and an even higher share of its wealth. It is England that has been at the forefront of defining Britain’s relations with Europe and the world.

But what do the English think of England and Englishness? And how do they see their future in Britain and Europe?

It seems in these times of uncertainty – with the empire gone and relations with Europe shaky – many in the country are eager to restore a stronger sense of nationhood.

As a result, when English nationalism is given voice, it is typically by far-right xenophobes.

This internal conflict may feed what Kate Fox, the social anthropologist and author of  Watching the English, calls the “hypocrisy” that’s infecting “almost all of our behaviour – and even the ‘ideals’ we most prize, such as modesty, courtesy and fair play”.

It is not a deliberate, cynical, calculated attempt to deceive others, but rather an unconscious, collective self-deception, she argues. And at the heart of it all lies a “social dis-ease” – a shorthand term for the chronic social inhibitions that often typify the English.

In these times of uncertainty - with the empire gone and relations with Europe shaky - many in the country are eager to restore a stronger sense of nationhood.

This all sounds pretty harsh to me, but apparently the alternative is worse, she argues: “When we drop the hypocritical pretence, we tend to become incoherently aggressive, rather than calmly assertive.”

On a more philosophical level, however, Baggini considers that English culture is predominantly conservative, communitarian and working-class.

He warns: “Unless we recognise the fact that England is not liberal, we will be going against the grain of popular thinking.”

Yes, England is a country of laws that treats its citizens equally, but for the English, “rights and privileges are derived from membership and commitment to English society, and are not equally applicable to all, irrespective of family history or current behaviour.”

Making of the English mind

What, then, goes into the making of the English mind that produces the kind of thinking and behaviour the English are renowned for?

Let’s set aside the tired arguments about the island, unpredictable weather and the Anglican Church.

What makes the English a little different from the Welsh or the Irish, or the Scots, argues Baggini, is their “self-assurance about their own historic greatness”.

It tends to “give us a certain arrogance that stands in the way of truly opening up to the countries we visit”.

And, he adds, “Our imperial past has not made us more open to foreign cultures, it has actually made us even narrower in our outlook because we expect the whole world to revolve around us”.

Fox goes further to say that “English modesty rules often act as a counterbalance to our natural arrogance, just as our courtesy rules protect us from our own aggressive tendencies.”

These are important observations. Because as British writer and journalist Jeremy Paxman concluded in his 2012 BBC series, Empire: “If we really want to understand who we are, it’s time we stopped pretending the empire was nothing to do with us.”

A dozen years earlier, Paxman wrote The English, a Portrait of a People, about what it meant to be English, after empire, the disarray in the United Kingdom, the plunge into Europe and the uncontrollability or globalisation.

He notes that the English haven’t had a “clear and positive sense of themselves” since World War II and its immediate aftermath.

Indeed, the English have been trying to come to terms with the end of their 300-year empire in less than three decades.

They’ve also been struggling with some existential questions about their national identity and the future of their country in a rapidly changing world.

Curiously, the English made no big deal of a national anthem or national song and many don’t even remember their national day. The American Fourth of July and French 14 Juillet are celebrated with much more fanfare than the obscure St George on April 23.

The discussion over Brexit has already transformed England regardless of its results.

In his book, England: An Elegy, the Conservative British philosopher Roger Scruton laments about England’s fortune and future at a time when “Scottish, Welsh and Irish nationalism are flourishing and English nationalism is disapproved of, when the customs and the institutions of the English are being dismantled, either from outside by the European Union, or from inside by the political elite, and when the rising English generation has little or no knowledge of the history, culture or religion of the place where it was born.”

I read these lines of the book cover and remember how with every passing day, the English reveal how they are just like any other people; like European and other nations, the disenfranchised and disillusioned look for the nationalist ethos in times of crisis and uncertainty.

This means recalling the good old days, whether true or imagined; awakening ancient hatreds, and warning against the barbarians at the gates. And of course, demonising the European Union.

In this spirit, the conservative publication This England warned: “The whole thing is a racket where we’ll end up being a colony of Germany. We won the war, but they’ll win the peace.”

The former Mayor of London, Boris Johnson, echoed this apocalyptic vision recently with his claim that the EU shared Hitler’s objective of subjugating Europe to one authority, albeit using “different methods”.

The discussion over Brexit has already transformed England regardless of its results. England, like the rest of Europe, will remain divided between those who want to make their nations great together, and those who want to go it alone.

The rest of us must unite against the scourge of radical nationalism in Europe, hoping for more English humour and less hypocrisy. 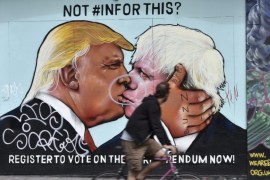 Whatever the result, the vote will prove only the beginning of a long process to redefine 21st-century Britain. 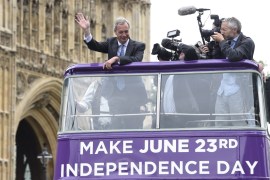