Meral Aksener is a gutsy 59-year-old Turkish politician. Her bid to take over the leadership of the opposition Nationalist Movement Party from Devlet Bahceli, at a special party congress on July 10, has put the cat among the pigeons in Ankara.

Yet, for a time it was unclear whether the congress would even take place due to internal and legal obstacles, allegedly influenced by the ruling Justice and Development Party. The green light was finally given following a decision from the Court of Cassation on May 24.

With support for the Nationalist Movement Party (MHP) under the leadership of Aksener reportedly ranging between 20-25 percent, she has the potential to shake up the country’s political landscape. And also, with a stronger party, she has the potential to hamper Turkish President Recep Tayyip Erdogan’s plan to fully consolidate his power by transforming Turkey’s governance system into an executive presidency.

This is why Aksener – who has been compared to the “Iron Lady”, former British Prime Minister Margaret Thatcher – represents a significant threat to Erdogan’s plans, and may ultimately prove that the president is not as powerful or as undefeatable as many people, both in Turkey and the West, have portrayed him.

Aksener first entered Turkish politics in 1995 as a member of parliament for the centre-right True Path Party (DYP) of Tansu Ciller. She was the vice-chairwoman of the party, before becoming minister of interior in 1996 – the first female to hold that post in Turkish history. With the decline of the DYP, she joined the MHP. With her democratic resistance to the February 28, 1997, decisions taken at the National Security Council meeting, her career took another turn.

The February 28 process – the so-called “post-modern coup” – resulted in the removal of the prime minister of the day, conservative Islamist Necmettin Erbakan, and her resistance significantly jettisoned her into the spotlight.

This has never been forgotten, and earned her the respect of many pro-democracy Turks from different political backgrounds.

An alternative to Erdogan?

The current policies of Bahceli – as MHP’s chairman since 1997 – have been unconstructive to the point of him being labelled as “Mr No”.

This has included his categorical opposition to the Kurdish “peace process”, his unwillingness to consider several coalition options in the aftermath of the June 7, 2015 parliamentary elections, and his failure to produce appealing policies to challenge the ruling Justice and Development Party (AKP).

With significant support from MHP members, Aksener's victory is almost certain. However, exactly because of this reason, it is also possible that her ascension to the party leadership could be hindered by some external forces.

This has cost the MHP dearly, with many loyal voters opting to back the AKP, which has adopted an increasingly nationalist narrative over past years.

If a snap election were to be held tomorrow, it is unlikely the MHP would pass the 10 percent threshold needed to enter parliament.

Hence, there is an urgent need to revitalise the party. Aksener is particularly well placed to take on this role.

One of the reasons behind the AKP’s and Erdogan’s appeal when the party was first founded in 2001 was tied to the political climate in Turkey in the aftermath of the February 28 coup.

Erdogan – who comes from the same “school” of political Islam as Erbakan – benefited from this victim image very well for many years.

Yet, because Aksener also had such a central role in opposing the coup and had to face its consequences, she is equally entitled to claim victimhood.

Moreover, considering the Turkish voters’ predominantly centre-right leaning, it is likely that a credible alternative to the current government can come from that part of the political spectrum.

However, the failures of the centre-right in the 1990s and the AKP’s spectacular success left no space for a new party despite the presence of a large number of traditional centre-right voters.

The secular and liberal share of this group have voted for the Republican People’s Party (CHP) in the last few elections, but a large majority of right-wing conservative voters have backed the AKP.

While some of the conservatives are unhappy with the AKP’s current policies, it is very difficult for them to support the CHP, which is historically a centre-left secular party and still continues to peddle against Turkey’s conservative masses.

At this stage Aksener’s background represents hope for millions of conservatives who are disillusioned with the AKP and cannot associate with the CHP.

Changing the image of the MHP

The MHP has a very negative image in the West, which to some degree is understandable given the party’s past.

It and its supporters have been accused of being linked to violence, especially in the 1970s during struggles between right and left groups in Turkey.

However, Bahceli has managed to change this image and move the party to a democratic line. Moreover, Aksener’s centre-right pro-democracy background may bring the party to a line similar to that of the New Flemish Alliance in Belgium – a mainstream central-right party with nationalist, conservative and liberal elements, rather than an ultra-nationalist line.

Clearly Bahceli will not go without a fight and he still has control over the party. Furthermore, Erdogan could use the internal power struggle to his advantage.

The support of another political party is a must. Although Bahceli is an opposition figure, at times, he has directly and indirectly supported the AKP.

Nowadays, there seems to be an unofficial collaboration between the AKP and him. Thus the AKP seems to be backing his leadership and in return he may indirectly support Erdogan’s objective to establish an executive presidential system.

Recent decisions from regional courts aimed at preventing the congress, along with the support of pro-AKP media to Bahceli demonstrate the Erdogan’s preference to keep Bahceli as chairman.

With significant support from MHP members, Aksener’s victory is almost certain. However, exactly because of this reason, it is also possible that her ascension to the party leadership could be hindered by some external forces.

If this were to happen, Aksener would once again be the victim of an undemocratic process, and it is likely that she will establish her own party in cooperation with other senior opposition figures from the MHP and even some former senior figures from the AKP.

Such a centre-right movement might also become the main opposition movement in Turkey.

Demir Murat Seyrek is a senior policy adviser at the European Foundation for Democracy. 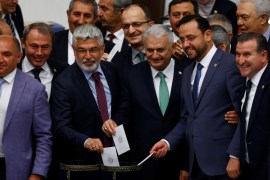 Is it a democratic move or another step towards a one-man rule? 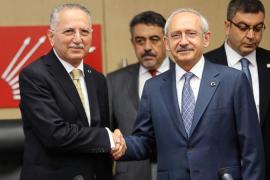 The conservative turn of Turkey’s opposition

Is the Turkish opposition boycotting identity politics or engaging in it?