I watched and listened, often with tears, as Muhammad Ali was eulogised. I cried when the service opened with a reading from the Quran, because it was the first time in the history of the United States that a recitation of the Quran was read and heard in reverence on major national American television networks. I thought, even in death, he is a revolutionary.

Although some spoke of his life as a radical revolutionary, it seemed almost tangential to the overarching message that Ali was a beloved champion boxer, the greatest there was. Of course, he was that. Yet, I couldn’t help but recall the words of Cornel West, who has spoken of the “Santa Clausification” of Dr Martin Luther King. With the exception of two or three speakers, it felt as if Muhammad Ali’s legacy was undergoing a similar softening and rounding of the edges of his life, the Santa Clausification of Muhammad Ali.

So much of Muhammad Ali was left unsaid and untouched at his funeral service. A critical part of him, mostly ignored, is that he was an organic and public intellectual. He spoke truth to power. His words, ideas, actions and positions changed the world.

He is one of the few intellectuals whose production of knowledge was accessible to the masses in such a way that it provoked immediate thought. He was instrumental in spurring moral evolution and moral advancement among whole generations, worldwide.

His refusal to be drafted, saying “No Viet Cong ever called me nigger” became an anthem of critical thought and introspection, especially among black men facing the draft.

READ MORE: Muhammad Ali – Rumble in heaven as you did on Earth

Thousands of miles away, the Vietnamese heard him, too, and, as a result, often refused to fight or kill black US soldiers during the Vietnam War. Ali was an instigator of brotherhood and the political establishment, as well as mainstream media, tried to destroy him for it.

Ali was an instigator of brotherhood and the political establishment, as well as mainstream media, tried to destroy him for it.

So, it seemed incongruous with his legacy to witness moments in the funeral service that seemed like campaigns for Hillary Clinton.

Ali was one of the few and first notable Americans to voice unqualified support for Palestinians in our struggle against Zionism’s settler-colonial project in Palestine.

Many of those who got up to praise and eulogise him would be among the first to persecute a contemporary athlete if he/she would dare to embark on the moral path Ali walked decades ago when he went to a Palestinian refugee camp and said openly, “I declare support for the Palestinian liberation struggle”.

In fact, the current political establishment is doing exactly that with unfolding anti-BDS (the Palestinian boycott, divestment and sanctions campaign) legislation.

Were an athlete today to criticise Israel as Ali did, he or she may well find his or her name on an emerging anti-BDS blacklist.

No one at his funeral mentioned this, with the exception, perhaps, of Rabbi Lerner in his general statement about injustice to Palestinians.

In fact, Billy Crystal’s eulogy probably made people believe that Ali was a supporter of Israel because they apparently raised money for some programme at the Hebrew University in Jerusalem.

An honest reflection of Ali

Had he wanted to give an honest reflection of Ali, that would be the point where Billy Crystal should have noted that Muhammad Ali was an unabashed supporter of the Palestinian struggle against Israeli colonialism, including the annexation of Jerusalem. But he didn’t, and I believe it was an intentional omission.

Ali’s insistence on morality, however unpopular; his defence of justice, however obscure; his defiance of power, whatever the personal cost; and his ability to communicate his positions clearly and convincingly in a language grounded in integrity, honour and principle, are all among the hallmarks of a transforming public intellectual. He was all that.

READ MORE: Why we mourn Ali

His influence on my life was profound. I never met or spoke to him, but his presence in my thoughts feels personal, almost intimate.

Incredibly, there are millions who feel as I do. He performed that miracle of taking residence in the hearts of people he had never met, millions of us.

And though he was indeed “The People’s Champ” who gave of himself to all peoples, especially the oppressed, Muhammad Ali was a black man, produced by blackness, in all that entails of 400 years of raw and human struggle.

As a public intellectual, athlete and revolutionary, he belongs to the legacy of the people from whence he came. The Prettiest and the Greatest, was in fact, a proud, principled and defiant black man in America. 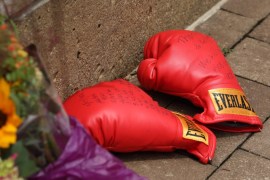 Why we mourn Ali

A magnificent poet, principled Muslim and anti-war leader who altered the image of what it means to be American.