The Arab Spring that swept across the Middle East and succeeded in overthrowing three dictatorships in Tunisia, Egypt and Libya in 2011 was a pivotal point in the history of nations.

Despite the subsequent descent into the “Arab Winter”, the peaceful protests of young people were heroic. The movement demonstrated the power of the people against the status quo and the grip of repressive regimes.

After the initial but short-lived success of the Arab Spring, many observers asked: “Why hasn’t there been a Sudanese Spring?” Sudan’s crisis had been no less severe, nor protracted than those of the Arab Spring countries.

He explained that the Arab Spring in Sudan had already occurred through a bloodless revolution that he led against the democratically elected government of Prime Minister al-Sadiq al-Mahdi on June 30, 1989. Bashir’s claim had astonished many in Sudan and across the globe.

While the Sudanese people admire the Arab Spring, they do not appreciate the question of why the Sudanese have not followed suit.

They proudly believe that they are the pioneers of the art of popular uprisings in the region.

A united Sudan is vital for the stability and security of the region. However, current policies and leadership in the country continue to dissatisfy the people of Sudan.

As in the April 1985 uprising, students today are leading the way in building momentum. Last April’s surge in student protests should be seen as a continuation of a successful revolt, not as random pockets of unrest, says Mastour Mohamed, the secretary-general of the Sudanese Congress Party (SCP).

Indeed, the people of Sudan have made many efforts to break through the ceiling of a repressive regime.

In January 2011, anti-government protesters, inspired by the “Arab Spring” movements in Tunisia and Egypt demanded the departure of the regime.

Peaceful protesters were met with the regime’s usual excessive use of force. Perhaps South Sudan’s secession overshadowed the protesters’ demands.

Demonstrations surged again in December of 2011, when students at the University of Khartoum staged a successful sit-in. Increasing economic and political fragility of what’s left of Sudan, led the government to impose austerity measures.

Public announcements of these austerity measures brought protesters back on to the streets in the summer of 2012.

Rising fuel prices throughout 2013 also increased public outrage. The September popular uprising of 2013 was one of the milestones in the Sudanese quest for freedom and dignity. The uprising started in Nyla City in Darfur, and then swept across the country.

Puncturing the wall of fear

Sudan cannot heal the wounds of its evil past as long as those who have inflicted such injustice are permitted to do so with impunity – and with the broken or hollow promises of peace from the international community.

As the regime’s same old tactics rot it from the inside, those outside the regime feel the deterioration.

Those who previously benefited from the inequitable policies of Bashir’s regime are feeling the consequences of their dwindling prospects. They are gaining greater perspective and empathy for their former ethnic rivals.

A student from Khartoum University, and a leading activist against the so-called corruption dams, stated that “the student activists are now fully aware of the regime’s tactics and cannot be divided on racial or any other grounds.”

Mohamed of the SCP argued that students have scaled the “wall of fear”. “Risking their lives, students picked up tear gas canisters before they exploded and threw them back at the armed forces. Thus they fight back and do not quit,” he said.

When asked why students have punctured the “wall of fear”, Adam Musa, one of the leaders of the Darfuri Student Leagues Coalition, said: “We do not have another option. People are so bitter. The continuous excessive violence by the regime and our long accumulated trauma, has emboldened us to fight back.”

Sudan shall not be failed

Sudan is geopolitically important for the region in the fight against terrorism, and in its efforts of humanitarian intervention for those migrating through Sudan’s porous borders.

A united Sudan is vital for the stability and security of the region. However, current policies and leadership in the country continue to dissatisfy the people of Sudan.

The Arab mainstream media have not given the same coverage to the aspirations and efforts of the Sudanese people as they have to the neighbouring Arab Spring countries.

Sudan is in urgent need of a fresh democratic transition, and for an inclusive peace to avert the negative scenarios of Libya and Syria.

Perhaps such media attention would provide powerful insights into how to avoid another Bashir-like dictatorship for the countries which have fallen into the chaos of “Arab Winter”.

The League of Arab States has failed to offer the Sudanese opposition forces and independent civil society any fair hearing, as they have been doing in Syria.

The league and its members should listen to Sudanese forces of change. The people of Sudan will eventually succeed in bringing about change in their country, as they did in 1964 and 1985.

The question is, what role will the Arab states play in the rebirth of this vital nation?

Ahmed H Adam is a visiting fellow at Cornell University’s Institute for African Development, and a research fellow at the Department of Public Policy and Administration at the American University in Cairo.

Ashley D Robinson is a public policy and human rights expert. She obtained her master’s degree from Columbia University, School of International and Public Affairs. 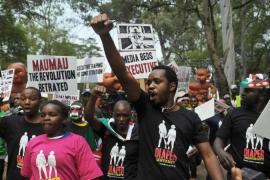 Why was there no ‘African Spring’?

Political circumstances in sub-Saharan Africa and the small size of its middle class have precluded an uprising. 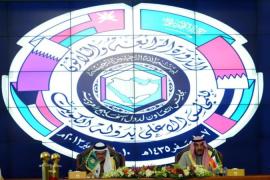 Despite diverging views on the Arab revolutions, the GCC remained unified due to common security concerns.

How the violence plays into Netanyahu’s hands