One hundred years ago this week, in the middle of World War I, an uprising erupted at the axis of the Islamic world, in Mecca. Encouraged by the British, the ruler of the holy city, Sharif Hussein, launched a revolt against the Ottoman Turks.

The British hoped that Hussein’s ancestry and authority – he was a descendant of Muhammad and his phone number was Mecca 1 – made him the ideal man to disrupt the jihad called by the Ottoman Sultan in 1914.

To persuade him to help them, the British promised him and his Arab nationalist supporters independence in the post-war world if they rebelled against the Turks.

The British never really believed that they would have to make good on that offer, and weeks later, to pacify a different ally, they would promise much the same territory to the French, in the infamous Sykes-Picot Agreement.

Oblivious to this double-dealing, Hussein fired the first shot of the rebellion from a window in his palace on June 10, 1916.

When his revolt then quickly fizzled out, the British began arguing among themselves about whether or not to send in troops to support him.

READ MORE: Sykes-Picot is not to blame for Middle East’s problems

In London, British ministers did not want to divert men to a place few of them could locate on a map. In October 1916, an intelligence officer named T E Lawrence was sent in to assess the situation.

His beleaguered chief had correctly calculated that a vivid witness report from this highly regarded young officer would tip the argument against intervention, restoring his own credit with the politicians in London.

Personal frustration – he was fed up with his desk job – made him add that they might benefit from an adviser. As it happened, Lawrence’s advice was good. He went on to mastermind a war of extraordinary fluidity and economy.

“This is a war of dervishes against regular troops,” Lawrence observed, “and we are on the side of the dervishes.”

This is a war of dervishes against regular troops and we are on the side of the dervishes.

What was a mischievous insight in 1916 has become an unremarkable military orthodoxy a century later. Most recently, US special forces have been photographed shoulder-to-shoulder with communist Kurdish fighters in eastern Syria.

These American soldiers are operating under exactly the same constraints as Lawrence was in 1916. They are in Syria because there is no appetite to send a larger force, whose very arrival might in any case be counterproductive.

And there is another pressure these Americans will face, which Lawrence would have recognised.

For what Lawrence lacked in materiel, he compensated for by enthusiastically supporting the Arab nationalists’ political aims. In particular, he emphasised his expectation that the Arabs’ right of conquest would trump the secret deal his own country had cooked up with the French.

The danger of this tactic became clear only after the Arabs reached Damascus in October 1918, just before the war’s end. Having been spurred on by Lawrence to reach the city, which lay inside the zone Britain had also promised to the French, they naturally expected that the British government would now honour its earlier promise to Hussein.

A sense of lasting betrayal followed when the British government did not because it valued its alliance with France more highly and reckoned that the financing of oil exploration would be easier if it imposed direct rule in Iraq.

Riding roughshod over Arab aspirations, Britain and France went ahead and divided the Middle East between themselves, generating deep and lasting Arab anger.

The British saw the tactics Lawrence had so successfully employed against the Turks turned against themselves, first in Iraq in 1920 and then in Palestine from 1936.

“Lawrence of Arabia certainly taught the Arabs how to make bombs,” one soldier mused after a search for his blown-up comrade yielded just a foot inside a boot.

The centenary is a good opportunity to reflect on the unintended consequences of the Arab Revolt.

Certainly, the American soldiers fighting alongside the Kurds are in as delicate a position as Lawrence was. Currently, American and Kurdish interests run parallel: Their immediate objective is the destruction of ISIL (also known as ISIS).

But the Kurds’ long-held hope of statehood invests this alliance with great symbolism, especially at a time when Syria and Iraq are disintegrating. In the course of dealing with one enemy, the Americans risk making several others.

Like Lawrence, the men we glimpse fighting this clandestine war will also be taking decisions every day loaded with political significance. The Arab Revolt provides a 100-year-old reminder that the consequences can be profound.

James Barr is the author of A Line in the Sand: Britain, France and the Struggle that shaped the Middle East. 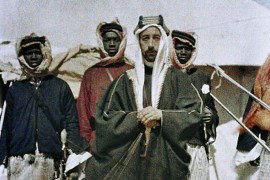 Sykes-Picot is not to blame for Middle East’s problems

Sykes-Picot is a symptom of the Middle East’s fundamental problem, not its cause. 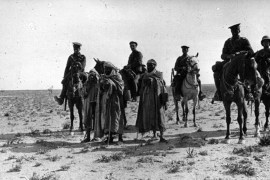