Pakistan has undergone a breathless eight years since its third transition from military rule to elected parliamentary governance in 2008.

The elections that year were overshadowed by the tragic assassination in December 2007 of Benazir Bhutto, who was on course for an unprecedented term as prime minister, amid a wave of national optimism. Her murder heralded the onset of a Taliban insurgency that has cost the country dearly.

As significantly, it robbed Pakistan of a leader acceptable to the public across the country’s four federating units. The wave of sympathy that followed ushered into power a coalition government engineered by her widower, President Asif Ali Zardari, but his reputation for corruption, justifiable or not, has made him a hugely divisive figure, and certainly not one with whom most Pakistanis wish to identify.

Naturally, the spotlight shifted to Bhutto’s career-long rival, Nawaz Sharif, whose sweeping victory in the 2013 general election reflected the electorate’s frustration with the Zardari administration’s preoccupation with consolidating power, and inability to arrest the declining security situation and economy, in particular crippling power shortages.

Sharif, too, has struggled. Like Zardari, he has been dogged by allegations of corruption, but unlike the former president, he has been hamstrung by a lack of political wiles.

His naivety was exposed by his attempt to seek a negotiated peace with the Pakistani Taliban who, unlike their Afghan colleagues, have no popular support whatsoever.

Khan, while the obvious candidate, has yet to turn rhetoric into a practical course of action...

Similarly, he was tricked into launching a treason prosecution against General Pervez Musharraf, who had ousted him in an October 1999 coup, whereas he should have realised that it would antagonise the country’s powerful military, thereby weakening his ability as prime minister to govern.

Thus barely more than a year after being elected, Sharif’s government was nearly toppled by raucous protests led by former sports star Imran Khan, who has latched on to the exasperation of many Pakistanis with the country’s pervasive culture of corruption, nepotism and lawlessness to emerge as a potential prime minister.

Indeed, had it not been for the outspoken support within parliament of Zardari’s coalition, now in opposition, and an embarrassing surrender of defence and foreign policy decision-making to the military, Sharif would have been overthrown.

With the odd exception, where by-elections have been necessitated, his party has retained seats in the federal parliament and the assembly in populous Punjab province, his political heartland. It also swept to victory in recent local government elections held there.

Nor is that level of support likely to change significantly because of the Panama Papers’ revelations that his adult children have owned offshore companies.

It is not that Sharif is well endowed with with the charisma, eloquence, instincts and forceful personality that traditionally define a “leader”.

Rather, it is because Sharif is acceptable to the majority of Pakistanis, including the the three of four provinces in which his party has no popular support to speak of, because he is perceived as a safe pair of hands.

Another factor is the lack of a credible alternative. Khan, while the obvious candidate, has yet to turn rhetoric into a practical course of action, and because of the involvement of an army general in the 2014 protests, is not liked in the southern provinces of Balochistan and Sindh, where people are distrustful of the Punjab-centric military.

READ MORE: Momentum builds for Pakistan to act against corruption

Khan is yet to mature the way Sharif has. Whereas he was a confrontational and ruthless political protagonist in his two brief stints as prime minister in the 1990s, Sharif is now cautious.

Undoubtedly, his forced exile from Pakistan during General Musharraf’s regime, spent mostly in Saudi Arabia, gave him time to reflect. During that period, he also grew close to Bhutto and was profoundly affected by her assassination.

With her gone, Sharif is the only politician in Pakistan with the stature of a credible national leader, albeit it a highly flawed one. Thus Pakistanis have good reason to feel nervous about their prime minister’s scheduled open-heart surgery on Tuesday.

Sharif’s detractors, after pausing briefly to pray for his recovery, have created a furore about who, constitutionally, can rule Pakistan while he is indisposed.

Minus Nawaz Sharif, Pakistan would be leaderless at a time when it is deeply involved in fighting two insurgencies...

Perhaps they should broaden their perspective.

Minus Nawaz Sharif, Pakistan would be leaderless at a time when it is deeply involved in fighting two insurgencies – one against the Taliban, the other against Baloch rebels. Its economy is tentatively emerging from eight years of austerity.

Meanwhile, Pakistan’s relations with neighbouring Afghanistan and India are uncomfortably antagonistic, and it is being diplomatically squeezed by the United States on matters of national security, as evidenced by the US drone strike that recently killed Taliban leader Mullah Akhtar Mansoor.

As such, any pursuit of Sharif’s political demise that is not focused on a legitimate transfer of power after the 2018 general election is rooted in callous disregard for Pakistan’s stability.

Those political actors are either blind to the nationally divisive consequences of their actions, or just don’t care. 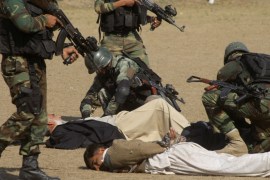