The Metropolitan Museum of Art in New York has just opened a magnificent exhibition of Islamic art of the Seljuqid period. That sentence would or should probably cause a double-take for right at the artistic and intellectual heartland of this beleaguered empire, Americans are celebrating one of the highest summits of Islamic civilization at a time when US Muslims are subject to one of the ugliest phases of Islamophobia in their recent history.

Court and Cosmos: The Great Age of the Seljuqs (April 27 to July 24, Metropolitan Museum of Art, Iris and B Gerald Cantor Exhibition Hall) is curated with admirable care, competence, and grace. Along with the exhibition, scholars affiliated with the Met have published a beautifully edited volume under the same title, with insightful essays by the leading social and art historians.

“Approximately 270 objects,” as the curators of this rare exhibition explain, “including ceramics, glass, stucco, works on paper, woodwork, textiles, and metalwork – from American, European, and Middle Eastern public and private collections are shown.”

Both the gracefully lit and curated exhibition galleries and the chapters of the accompanying volume address such aspects of the Seljuqid culture and civilization as the vast range of the their empire, their courtly lives, the state of science, medicine, technology, and other sciences, as well as their state of literary and religious scholarship, and finally their funerary arts.

It is hard to believe that you step out of the busy streets of Manhattan, now heavily overshadowed by the fearsome xenophobic rhetoric of the Republican candidates, and especially that of their now presumptive nominee Donald Trump, and walk into a succession of adjacent galleries so carefully and competently devoted to celebrating a crucial period in Islamic civilization.

ALSO READ: Once upon a time in the cosmopolitan east

But lo and behold! The Empire may go around the world and wreak havoc on it, but at its republican heart it needs to stage the relics of the vanquished.

The relics of this once magnificent, now all but forgotten, empire exhibited at the heart of this empire are uncanny.

Equally unsettling is when we look at a number of stucco figures, sitting gracefully or else standing with towering power and authority, that we can only imagine them in a similar museum in Iraq or Syrian destroyed on camera by the barbarian cannibals of the Islamic State of Iraq and the Levant (ISIL) group, plundering the priceless heritage of nations and selling them on black market to finance their malignant maladies.

What is it that you see when you enter this exhibition at one of the finest cultural institutions in the US?

You see statues of emperors and other royal dignities of the Seljuqid Empire (1037-1194) as they went about conquering and ruling over more than half of the civilized world, from the Mediterranean Sea to China.

You see utterly exquisite manuscripts of books on history, astronomy, medicine, you see decorative ceramics and chinaware, you see remnants and relics of magnificent palaces and mosques and citadels. You go through these calm, quiet, and delightfully lit galleries and you wonder.

The relics of this once magnificent, now all but forgotten, empire exhibited at the heart of this empire are uncanny.

Beyond the paradox of celebrating a bygone Islamic civilization at the height of Islamophobia stands another paradox: Ruins as the site and citation of memorial remembrances.

The 12th century Persian poet Khaqani (1121-1190) has an iconic Qasideh that he composed after he visited the ruins of Taq-i Kisra (Iwan-e Mada’in), a derelict ruin of the ancient city of Ctesiphon, the capital of the Sassanian Empire (224–651), before their collapse following the Arab conquest of the 7th Century.

Khaqani uses this visit to warn and admonish the kings and princes of his own time, asking them to ponder the lesson that these ruins of once a mighty empire contain:

Oh heart that can still learnest:

Learn from what thou seest –

As if looking into a pensive mirror

He continues to look at Euphrates as if a river of tears had flowed from the calamity that happened to that once magnificent city. All the palaces of tyrants one day will come to ruins, he assures his patrons and readers, just like these remnants of the Ctesiphon. Will they behold and learn?

Khaqani then goes through the whole gamut of kings and conquerors one dynasty after another passing through such palaces and yet now dead and forgotten. He asks the current rulers of the world to dismount their horses and elephants and prostrate on those ruins and learn the lesson of history.

That earth has swallowed so many tyrants and yet it is still insatiable and will devour even more world conquerors.

Today a poor man may ask the Sultan for some help –

And tomorrow the same Sultan may ask a poor man for help!

Generations and centuries have passed since the time Khaqani visited Taq-e Kisra and composed his unforgettable poem. Today those ruins are either viciously destroyed as the ISIL did in Palmyra or else carefully and competently curated in museums like this one at the Met. But the lesson they contain is not much different from those offered by Khaqani.

Those horses might now have been traded for Humvees, and those marching armies for drones and submarines. But the wisdom of Khaqani persists.

When in the company of a friend I visited the exhibition on the morning of May 5, scarce a single other soul was there in these serene and soulful galleries. We wondered from one room to another, a few hapless guards looking at us unsuspectedly.

We looked at one manuscript here and stood in front of a statue there. Outside these galleries, the rest of the museum was abuzz with guided tours, schoolchildren and their teachers, and haphazard New Yorkers and tourists.

Outside the museum the heavy shadow of a new presidential election dominated the sense of the city and the mood of the country at large. We walked out of the celebrated ruins of an old empire and stepped into the self-forgetful hussle-bussle of another. 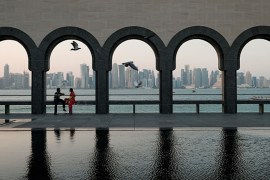 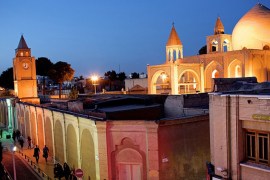 Once upon a time in the cosmopolitan east

New novel about 19th-century Armenian merchant is a metaphoric reminder of the cosmopolitan character of our cultures.