As the two-year anniversary of the last round of conflict in Gaza approaches, the inhumane conditions to which 1.8 million Palestinians are being subjected threaten to reach boiling point by the summer months, when the lack of access to water and electricity – available for a maximum of eight hours a day – combined with the oppressive heat and the lack of a reconstruction progress, could exacerbate frustrations, culminating in a new cycle of violence.

Despite the relative calm since the August 26, 2014 ceasefire between Israel and Hamas, there have been more than 20 serious incidents that involved incursions, air raids, and missile exchanges with 23 Palestinians killed in the Gaza Strip since December 2015.

As antagonistic verbal exchanges between Hamas and Israel continued over the past few months, scenes of rising violence in the West Bank and Jerusalem – seemingly outside the control of Hamas and the Palestinian Authority (PA) – started to further fuel people’s frustration, thus adding to the volatility of the situation.

The Israeli/Palestinian question has become notorious for the international community’s inaction.

Nevertheless, the reconstruction of Gaza is one area where action is not only possible but is also badly needed from both strategic and humanitarian perspectives.

READ MORE: Gaza’s ‘jihadists’ can no longer be dismissed

The estimates for how much construction has been completed vary depending on the source, and range from about 17 percent (3,000) of the approximately 18,000 homes destroyed or severely damaged in July/August 2014 according to the UN Office for the Coordination of Humanitarian Affairs; to 9 percent by the World Bank, or to “nothing” by the average Gazan.

Regardless of the exact figure, the fact remains that more than 75,000 people remain displaced across Gaza as a direct result of the July/August 2014 war, a problem made worse by insufficient funding.

There are many factors to explain the slow progress. Chief among them is the continued Israeli blockade; the underlying cause of all the wars in Gaza since Israel’s unilateral withdrawal in 2005.

Egypt’s refusal to open the Rafah border crossing without the presence of the PA, along with the Palestinians’ inability to activate a unity government, makes the situation even worse.

However, one controversial factor that has received little attention is the UN’s Gaza Reconstruction Mechanism (GRM).

The GRM is a complicated system of surveillance intended to: “a. Enable the GoP to lead the reconstruction effort; b. Enable the Gazan private sector; c. Assure donors that their investments in construction work in Gaza will be implemented without delay; d. Address Israeli security concerns related to the use of construction and other ‘dual use’ material” (UN, October 2014).

By attempting to be both the humanitarian and the jailer at the same time, the UN has fast become the recognisable face of the blockade.

Two years into the reconstruction process, it is now clear that the GRM not only poses difficulties for the people of Gaza seeking to rebuild their homes – as it forces them to wait for a long time before they receive any construction materials – but also, more importantly, erodes the moral legitimacy of the role of the United Nations in Gaza.

By attempting to be both the humanitarian and the jailer at the same time, the UN has fast become the recognisable face of the blockade.

For more than 70 years, the UN in Gaza has been associated largely with the work of the United Nations Relief and Works Agency for Palestine Refugees in the Near East (UNRWA).

While the Palestinian people have come to accept that the UN cannot resolve their problems, they still expect that it should at least attempt to take an impartial position, and on occasions adhere to its own values by acting as a witness and speaking up against the atrocities that Palestinians face.

With the GRM, the role of the UN changed. The humanitarian imperative that the UN clings to as it delivers aid in the occupied Palestinian territory is no longer neutral.

In fact, in order to facilitate the flow of construction material under the GRM, the UN is increasingly seen as favouring the status quo and siding with the one with power – Israel.

Arguably, among the four main objectives behind the establishment of the GRM, the one related to Israel’s security interest seems to take precedence all the time.

Under the current arrangements, a person seeking construction materials must first go to the GRM administrator to be placed on a list. Once their name reaches the top of the list, the Israeli Coordinator of Government Activities in the Territories (COGAT) must approve of the request before the distribution of any materials. The process between COGAT and the GRM can take weeks.

The sight of UN personnel in armoured vehicles accompanying sacks of cement (to ensure delivery and use as proposed) incenses the population of Gaza, as they view this practice as the UN placing a higher value on the protection of construction commodities than on human life.

The inability of the GRM to engage the local population has alleviated tensions over the past two years. During the conception of the GRM, the civil society of Gaza did not participate in the formation of policies governing the distribution of reconstruction materials.

Among the four main objectives behind the establishment of the GRM, the one related to Israel's security interest seems to take precedence all the time.

Only the United Nations, the Israeli government, and the PA devised the plan to rebuild Gaza. Due to their pre-determined position to deny Hamas any opportunity of engagement, the process effectively resulted in excluding citizens and civil society organisations, which was a big mistake.

Nickolay Mladenov and other senior UN officials understand well that the GRM has fallen victim to the complex politics of occupation and resistance.

It is being used every day to punish or “incentivise” Hamas and/or to frustrate any possibility of reaching an understanding between Gaza and the West Bank.

It has also provided a fig leaf to the Egyptian President Abdel Fattah el-Sisi which allowed him to close his borders while pursuing a doomed-to-fail securitisation agenda in Sinai.

Its lack of effectiveness has also provided many donors with the excuse to not honour their pledges, thus compounding the suffering.

In short, the situation in Gaza requires immediate action. Regardless of whose fault it is that the GRM has not been able to alleviate the suffering of the people of Gaza, it seems appropriate for the United Nations to admit to the failure of the mechanism and even to withdraw its services.

In fact, a walkout by the UN from administering the crossing and use of construction material is not only the right thing to do morally, but might also force constructive action from Israel, EU governments, the Gulf states, and the US as well as Hamas and the PA.

Given the security concerns in Iraq, Syria, Egypt, and elsewhere, the international community would not stand by and allow for a complete meltdown in Gaza.

The alternative is to continue to deny the reality of the mechanism and to watch the grievances of Palestinians in Gaza reaching an unresolvable level that explodes into another violent round of conflict, worse than the last.

Sultan Barakat is professor at the University of York and director of research at the Brookings Doha Center. He is a senior fellow in the Center for Middle East Policy at the Brookings Institution. 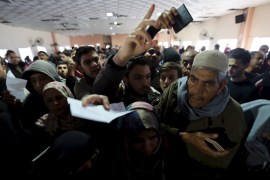