Before his triumphant return to power in 2012, Japanese Prime Minister Shinzo Abe called for the creation of a “democratic security diamond” with major allied nations such as the United States, Australia, and India.

He vowed to “invest, to the greatest possible extent, Japan’s capacities in this security diamond.” And true to his words, Japan rapidly upgraded its security relations with major powers in the region.

The Abe administration’s proactive foreign policy was driven by one key factor: Its admission that Japan “failed to anticipate that China’s naval and territorial expansion” would advance at such a rapid pace over the past decade.

But far from confining its strategic focus to major powers, Tokyo also made an unprecedented effort to reach out to smaller nations, particularly those in China’s backyard.

Shortly after reassuming his position at the helm of Japanese government, Abe made a high-profile tour across Southeast Asia, visiting Thailand, Indonesia and Vietnam.

Unlike any of its predecessors in recent memory, the Abe administration has made a concerted effort to simultaneously deepen Japan’s economic presence across Asia and to pursue expanded security cooperation with like-minded nations.

It has also reached out to estranged neighbours such as South Korea by trying to address its historical grievances. Without a doubt, the rise of China and its maritime ambitions have served as a primary motivation for a re-energised Japanese foreign policy.

Abe wasted no time underlining the significance of his charm-offensive across Southeast Asia.

“Currently, the strategic environment in the Asia-Pacific region is going through a dynamic change,” Abe declared before his visit across Southeast Asian countries in 2013. “During this [strategic] change, having closer relations with [Southeast Asian] countries contributes to the region’s peace and stability and is in Japan’s national interest.”

Beyond economic interests, the Abe administration is primarily concerned with China's growing military might and naval assertiveness in adjacent waters, which form the bedrock of Japan's trade linkages.

For the past century, Japan has been at the centre of industrialisation across Asia. In Southeast Asia, as the late Benedict Anderson explains, it eventually became “the single most important external investor in the region, both as extractor of natural resources (timber, oil and so on) and in industrial and infrastructural development.”

By the turn of the 21st century, however, China began to rapidly eclipse a stagnant Japan as the top trading partner of Southeast Asian countries. Shockingly, Japan also saw China overtaking it in the global pecking order.

In the same period, China’s share in the global economic output experienced an explosive growth: From only 2 percent in 1990, it is expected to reach as high as 25 percent in 2030.

Recent years, however, have seen a significant increase in Japanese investments and trade relations with Southeast Asian countries (PDF). In 2013 alone, almost a fifth of Japanese foreign direct investments flew to the region, underlining Tokyo’s growing interest in tapping into Southeast Asia’s labour markets to enhance the competitiveness of Japanese manufacturing.

Beyond economic interests, however, the Abe administration is primarily concerned with China’s growing military might and naval assertiveness in adjacent waters, which form the bedrock of Japan’s trade linkages.

In the East China Sea, Japan and China have been locked in a dangerous standoff, which has heavily undermined bilateral economic relations.

Deteriorating economic relations with China have prompted Japan to diversify its investments towards Southeast Asia under the “China Plus One” strategy.

Japan is also worried about China’s growing military footprint in the South China Sea. In response, it has rapidly upgraded its relations with like-minded, Southeast Asian nations such as the Philippines and Vietnam, which have been at the forefront of international efforts at constraining Chinese maritime assertiveness.

The past few years, in particular, have seen a blossoming in Philippine-Japan relations, with the two countries conducting their first joint naval exercises and signing a crucial military agreement which allows Tokyo to export advanced military hardware to its Southeast Asian partner.

Taking a cue from the Philippines, Japan is also contemplating taking China to international court over simmering maritime disputes.

Japanese submarines will next visit Vietnam’s Cam Ranh Bay. To push back against China, Japan is intent on aiding Southeast Asian countries such as the Philippines and Vietnam.

For instance, Japan is providing multi-role vessels and negotiating, among other things, potential sale of advanced “Soryu” submarines to the Philippines.

Japan is also more directly contributing to efforts at constraining China’s territorial ambitions. With the activation of the “collective security bill“, Japan is likely to join US-led freedom of navigation operations aimed at challenging China’s excessive sovereignty claims in the South China Sea.

Surely, there is little certainty as to whether Japan’s efforts will contribute to the resolution of the disputes in the region, if not lead to an uptick in maritime tensions.

But what is certain is that the Abe administration, unlike any of its predecessors, has committed a bulk of its diplomatic capital to deepen the Japanese strategic footprint in Southeast Asia and the broader region. Japan is finally back to the Asian strategic chessboard. 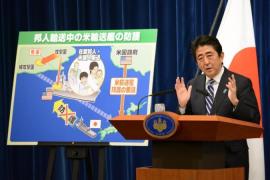