On April Fool’s Day, the Russian News Agency TASS published a story claiming that South Ossetia, the Russian occupied breakaway region in the Republic of Georgia, is opening a diplomatic mission in Italy.

According to the article, Mauro Murgia, South Ossetia’s self-proclaimed official representative in Italy, said that the mission will be based in Rome and housed in a private apartment.

This article was suspicious for a number of reasons. To begin with Italy does not even recognise South Ossetia’s independence and who would open up a diplomatic mission in someone’s private flat?

Even though this story had all the ingredients of an April Fool’s joke, it was anything but.

It is telling how absurd a situation has become when one cannot tell the difference between what is an April Fool’s joke and what is a real news story.

Ever since the invasion of Georgia in 2008, the region of South Ossetia has been illegally occupied by Russia. Out of 193 countries in the United Nations, only four recognise South Ossetia’s independence: Russia, Nicaragua, Nauru, and Venezuela.

Making the situation even more ridiculous, the so-called President of South Ossetia Leonid Tibilov – himself a chum of Vladimir Putin’s and a former KGB agent – announced this week that a referendum will be held to change the constitution, allowing South Ossetia to become part of Russia. The timing of the referendum was left vague but he said the vote would happen before August.

Far from being an exercise of self-determination, this referendum is simply the latest in a long list of Moscow-inspired political stunts aimed at undermining Georgia’s sovereignty.

The region of South Ossetia is legally part of Georgia and is occupied by Russia. Therefore, such a referendum has no basis in international law.

Furthermore, many of the original inhabitants of South Ossetia have been forcibly removed from their homeland or killed: Obviously, they will not get a vote.

During the 2008 Russian invasion, many ethnic Ossetians sought to cleanse the region once and for all of the ethnic Georgians living there – all under Russia’s nose. According to a report published by Human Rights Watch in 2009:

“South Ossetian forces over a period of weeks deliberately and systematically destroyed ethnic Georgian villages in South Ossetia that had been administered by the Georgian government. The South Ossetians looted, beat, threatened, and unlawfully detained numerous ethnic Georgian civilians … with the express purpose of forcing those who remained to leave and ensuring that no former residents would return.”

One big military base

Since the 2008 war, Moscow has invested heavily in turning South Ossetia into one big Russian military base. Russia currently has 4,500 soldiers in the occupied territory as part of the the 4th Military Base under the command of the 58th Army of the Southern Military District.

The puppet government of South Ossetia has even integrated much of its militia forces directly into the Russian military.

The line of occupation between South Ossetia and Georgia, which Moscow prevents international ceasefire monitors from crossing,  is controlled by border guards from Russia’s Federal Security Services, the successor to the Soviet Union’s KGB.

ALSO READ: Will Putin bite off more than he can chew?

Anyone who has visited the line of occupation regularly since 2008 can see new military facilities being built as the Russians do not even try to hide them. The region is home to all sorts of Russian military hardware including armoured vehicles, artillery, and tactical missiles.

Russia regularly changes the location of the administrative boundary fence it has installed to mark the dividing line between occupied Georgia and free Georgia.

Last summer Russia moved the fence within 500m of Georgia’s E60 highway, which is the main road linking the Black Sea to Azerbaijan. This move also placed a 1.6km segment of the BP-operated Baku-Supsa pipeline inside Russian occupied territory.

There are even cases of locals going to bed in Georgia and, after Russians installed a fence overnight, waking up in occupied South Ossetia.

It is no coincidence that the referendum in South Ossetia was announced while the world was focused on the recent fighting in Nagorno Karabakh. The world can barely focus on just one crisis at a time in the South Caucasus, much less two. Moscow knows this all too well.

At the end of the day it does not really matter if a bogus referendum in South Ossetia leads to the full integration into Russia or not.

Either way families remain divided. Farmers are separated from their fields. When Georgian shepherds stray into South Ossetia they run the risk of being arrested.

As is often the case, the locals pay the price for Russian imperialism. 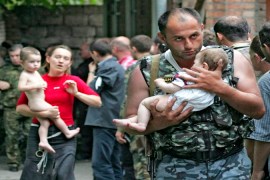