How do you solve a crisis? By brushing it far enough away from your gaze that you can pretend that it’s no longer there? That at least appears to be the European Union approach.

Europe’s leaders have been desperately trying to figure out a solution. And this week, after months of negotiation, they stitched together a deal with Turkey – a deal that effectively allows the EU to push the problem far enough away to pretend that it’s not there.

Under the deal, the fine details of which are still being hammered out, all new, irregular migrants crossing from Turkey to Greece will be sent back. A “one-for-one” agreement will allow one Syrian from a Turkish refugee camp to be resettled in the EU, for every Syrian refugee returned to Turkey from Greece. For non-Syrians, the route to Europe is entirely cut off.

In return, the EU has promised to speed up plans for Turks to travel visa-free inside the Schengen area and to actually pay Ankara some of the $3.3bn that was promised in October for Turkish help in closing its borders to migrants.

Turkey has reportedly asked for an extra $3.3bn, which is still under negotiation. Turkey has also demanded that concrete steps be taken to resume its accession negotiations with the EU.

If the arrival in the EU of a million migrants and refugees is an unacceptable imposition and the cause of a major crisis, how does the EU imagine that offloading them to Turkey will be any less of an imposition or crisis?

Some of the poorest countries in the world already bear the greatest burden when it comes to helping refugees. If these countries were to adopt Europe's attitude, there really would be a crisis.

Dimitris Avramopoulos, the EU commissioner for migration, has described the bottleneck of migrants and refugees in Greece, created by the closing of borders further north, as raising “the possibility of a humanitarian crisis of a large scale”. Why should bottling migrants up in Turkey rather than in Greece be any different?

What the deal envisages is the forced collective expulsion of migrants and refugees from Greece to Turkey.

Leave aside the morality, think of the practicalities. Do the EU leaders think that tens of thousands of migrants and refugees will meekly accept their fate and return quietly?

If only a small number of those being forcibly repatriated resist, one can imagine the scenes in the camps or at the train stations or the airports.

The numbers of migrants and refugees coming to Europe are indeed large. But it is worth putting those numbers in context. One million of them constitutes less than 0.2 percent of the EU’s population.

Turkey with a population one seventh that of the EU is already host to 2.7 million Syrian refugees. (Those are the official figures; the real number is likely to be more than three million.)

There are already 1.3 million Syrian refugees in Lebanon – 20 percent of the population. That is the equivalent of Europe playing host to 100 million refugees. Pakistan and Iran each have over one million refugees within their borders.

Some of the poorest countries in the world, in other words, already bear the greatest burden when it comes to helping refugees. If these countries were to adopt Europe’s attitude, there really would be a crisis.

This is perhaps the most immoral aspect of the EU’s policy: at its heart seems to be the idea that dealing with migrants and refugees should be an issue primarily for poor countries.

Far from the Turkey deal being a “historic breakthrough”, as Donald Tusk, the European Council president, described it, it follows the pattern of previous EU migration policies.

Since the 1990s, the EU has adopted a three-pronged strategy: criminalising migrants; militarising border controls; and outsourcing the problem by paying non-EU states – most notoriously Colonel Muammar Gaddafi’s Libya (PDF) – huge amounts of money to act as Europe’s immigration police,; in effect, relocating Europe’s borders to beyond Europe. Push the problem outside of Europe and pretend that it’s not there.

The one country that has come out of this whole debacle with honour is Greece. Effectively abandoned by the rest of the Europe – as Macedonia and other countries to the north have closed their borders – and suffering grievously from an economic crisis and from austerity policies imposed primarily at the behest of the EU, the people of Greece have nevertheless shown an admirable moral commitment to migrants.

True, there have been some anti-migrant demonstrations, and the far-right Golden Dawn won 7 percent of the vote in last year’s general election. But mostly Greeks have shown enormous solidarity.

OPINION: Turkey is the sick – but still strong – man of Europe

Some 14,000 migrants and refugees are trapped in Idomeni on the Greek side of the Macedonian border, after the Macedonian authorities decided to allow only a handful to enter each day. “I have admiration for these people because they still have hope,” said the local deputy mayor, Evelina Politidou, adding that helping them was a “moral obligation”.

The island of Lesbos, close to the Turkish coast, is at the very centre of the crisis. The number of migrants and refugees who have arrived on the island in the first two months of 2016 alone is about the same as Lesbos’ normal population. Yet, the locals continue to support migrants with food, shelter and solidarity.

Meanwhile the EU, despite commitments to relocate 66,400 refugees from Greece, has provided places for only 325. “It is amazing”, as the UNHCR chief Antonio Guterres told Lesbos Mayor Spyros Galinos recently, “that on a small island you are managing, whereas in a big Europe, with half a billion people, they are finding it so difficult”.

There is a lesson there in morality and solidarity that all Europe could learn.

The bane of cultural appropriation 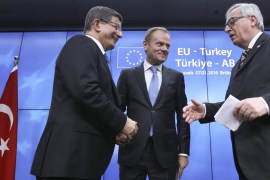 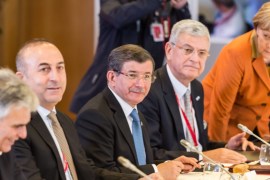 Turkish citizens to get visa-free travel to Schengen zone by June in return for cooperation on refugees, officials say.