More than 10 years have passed since Israeli settlers withdrew from Gaza. Life for the average Gazan has become markedly worse since – exacerbated, some would argue, by the election of Hamas in 2006 and its physical takeover of the territory in 2007.

The peace process between Israel and the Palestinians is moribund and, with conflicts raging elsewhere in the Middle East, world attention appears to have moved on. Political leaders and public opinion are tired of the Israeli-Palestinian conflict, of the intransigence displayed by both sides and the seemingly never-ending cycle of violence, destruction and despair.

Yet there are, very occasionally, glimmers of hope. There remain Israeli and Palestinian pragmatists who are still prepared to take tentative steps towards engagement with “the other”.

Western states should be doing all they can to support such openings for dialogue – even if it means engaging with unsavoury characters. That means both talking to Hamas and frankly reassessing unwavering support to Fatah.

Doing that would not automatically equate with politically naivety or becoming an apologist for terror. It lies in recognising that the pathway towards peace is a long, tortuous process – and a process that is only effective if all key players, including those with “blood on their hands”, are included.

The international community’s insistence on a Palestinian national consensus government – but one that does not include Hamas – has been not just ineffective but counterproductive.

This policy, it seems, has been predicated on the assumption that by supporting Fatah and isolating Hamas, Hamas might be forced to give up political and territorial control, which in turn might help advance the peace process between Israel and Palestine.

Instead, Fatah is more unpopular among Palestinians in both Gaza and the West Bank, and has arguably become even less effective, than ever before – with concerns voiced that Palestinian Authority institutions are close to collapse. Israel has refused to engage with the now defunct Palestinian national consensus government, thus invalidating one of the supposed key reasons for its creation.

It is time to change the broken record on Western non-engagement with Hamas, and begin the hard work of bringing a terrorist group in from the cold and into the political process.

Meanwhile Hamas, while financially weakened due to tightened Egyptian controls over money and weapons entering Gaza, and prone to internal leadership struggles, remains very much in charge. All evidence thus points to the fact that Hamas, however unpalatable it may be, is here to stay, and any future peace deal will need to include the movement.

Various attempts have been made to conflate Hamas with extremist Islamic fundamentalist groups such as the Islamic State of Iraq and the Levant (ISIL). This is both unhelpful and inaccurate. Let us not forget that entirely legitimate Palestinian aspirations for statehood lie at the heart of Hamas’ popular appeal.

There is, of course, undeniable evidence of violent extremist thought and action from Hamas. The central rationale for Hamas’ continuing international isolation is the movement’s 1988 covenant, which explicitly calls for the destruction of Israel.

However, there is also evidence of pragmatism from Hamas’ Gaza-based political leaders – in relation to both Israel and the question of Palestinian reconciliation. Previous gestures indicating a willingness to explore possibilities that lie beyond Hamas’ official position have tended to be resolutely ignored by Israel and Western governments, rather than viewed as potential openings for dialogue.

Former Hamas Prime Minister Ismail Haniyeh is on record as saying that Hamas would respect “1967 borders” – in effect amounting to an implicit recognition of Israel.

OPINION: Gaza’s ‘jihadists’ can no longer be dismissed

A previous Egyptian-brokered agreement for Hamas to control rocket fire by other militant groups operating in Gaza – in exchange for Israel allowing more humanitarian goods to enter Gaza – was upheld by Hamas’ political wing.

It did so even when, as measured by data collected by Israeli authorities, the volume of humanitarian goods Israel allowed to enter Gaza actually decreased during the same period.

When it comes to the issue of Palestinian unity, and a viable agreement between Fatah and Hamas, seasoned commentators have noted that it is Fatah that has been most unwilling to compromise, with Hamas more willing to offer concessions (PDF).

This appears to be driven by a – probably incorrect – assumption on Fatah’s part that Hamas’ days are numbered, and at least in part fuelled by the international community’s continued “no questions asked” support to Fatah.

Moderation prevails – but for how long?

Anyone who visits Gaza cannot help but be struck by the humanity of ordinary people. I recall taking a group of United States Republican Party Congressmen around Gaza who were astounded at the even-handedness of a grieving parent, who had just lost two children in an Israeli shelling. “I want peace, and I want justice,” said the father. No mention of revenge or of the destruction of Israel. Just peace and justice.

That moderation is being eroded – by a decade-long blockade on trade and movement in and out of Gaza that is stifling all opportunity, and all hope and through three wars in the space of seven years.

And that is not to mention the current absence of solutions to the core issues bedevilling the Israelis and the Palestinians: the fate of Jerusalem; Israeli settlements in the West Bank; assurances of Israel’s security; the Palestinian “right of return”; and the viability of a contiguous Palestinian state.

Surely Hamas bears some of the responsibility for the current state of affairs, but we ignore it at our peril.

It is time to change the broken record on Western non-engagement with Hamas, and begin the hard work – with, it should be said, no guarantee of success – of bringing a terrorist group in from the cold and into the political process.

Saskia Marsh is a Senior Fellow at the Foreign Policy Collective and a former UN official in the Middle East. 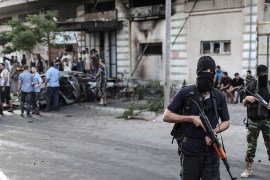 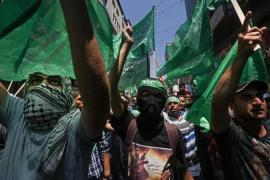 Israel has empowered, not weakened Hamas