A spectre is hovering high over the United States – the spectre of a Trump presidency. All the elders of the Republican Party have now entered into a frightful alliance to disown and exorcise this spectre. But the goblin listens to no one, as millions of xenophobic, angry, “poorly educated” (as Trump proudly calls his own supporters), mostly white men and women storm around him, raising their right hands “Sieg Heil” style and pledging allegiance.

“In an extraordinary display of Republican chaos,” CNN reports, “the party’s most recent presidential nominees, Mitt Romney and John McCain, lambasted current frontrunner Donald Trump on Thursday, calling him unfit for office and a danger for the nation and the GOP [Grand Old Party].”

The cause for fear is self-evident: “GOP hawks declare war on Trump,” according to reports, “Prominent Republican hawks are debating whether to hold their noses and vote for Clinton instead.”

What is the difference between Trump and Clinton? This is the critical question the US voters face this year, but not the world at large, for which Trump promises to do more of what Clinton and all Democrat and Republican presidents before her have already done and continue to do to the world.

ALSO READ: Why I will vote for Bernie Sanders

Why buy the stooge of corporate America, Donald Trump supporters are effectively asking, when the real deal, their preferred candidate, is on sale?

Why buy the stooge of corporate America, Donald Trump supporters are effectively asking, when the real deal ... is on sale?

This is a decisive moment because the fake facade of US politics is finally falling down and the naked truth of corporate reality running this show reveals its naked fascistic face for the whole world to see.

A demagogue salesman is appealing to the basest instinct of US consumers, to the very logic of US capitalism run amuck.

The naked fascism that Trump flaunts today has always been there but hidden behind the mask of politics-as-usual; hidden behind smiling faces, false promises, gaudy oratorical speeches, the kissing of frightened babies, the shaking of insincere hands, while hiding the terror of global warfare, drone attacks, special forces, secret kill lists, CIA torture chambers.

A consensus is now building in the US that the Trump presidency is so dangerous Democrats and Republicans should unite to prevent it by electing Hillary Clinton. But what exactly is the difference between a Clinton and a Trump presidency for the world at large?

The prospect of a Trump presidency is only frightful if you think Hillary Clinton’s record of warmongering around the world – from Iraq to Libya to her threatening Iran with annihilation – is a stellar record of high-minded and competent diplomacy.

Americans have every reason to fear a Trump presidency, but the world at large has not an iota of reason to believe Clinton would be any better. Trump is promising to deliver to Americans a dose of what Clinton, her husband, the current US president, and all the Republicans and Democrat presidents before him have administered to the world at large.

Now suddenly these Republicans are scared of fascism. They did not worry about fascism when they produced George W Bush, who wreaked havoc on Afghanistan and Iraq and set in motion a criminal catastrophe that has now resulted in murderous mayhem raging from Iraq to Syria.

But now that Trump appears to threaten their entire party apparatus suddenly they worry about fascism. Fascism arrived and wreaked havoc from one end of the globe to another by these very Republican cons and neocons a very long time ago.

Xenophobia is on sale

Clinton has a proven record of murderous warmongering on a par with any Republican warmonger. Donald Trump only promises to do more of what she has done. He has no record of any such atrocities as yet.

Clinton has a proven record of murderous warmongering, on par with any Republican warmonger. Donald Trump only promises to do and be more of the same that she has done...

He, in fact, has occasionally condemned both the Afghan and Iraq invasions, and on Israeli murderous records he has declared himself agnostic and neutral, even daring to suggest that Israel is not sincere in its claim to be peaceful. And, contrary to Clinton, he is not in any billionaire Zionist’s deep pocket and has not written and signed a pledge of allegiance to those hell-bent on stealing the entirety of Palestine no matter what the cost to Palestinian lives and Liberty.

Yes, indeed, the horrors of Trump’s xenophobic racism and misogyny against Mexicans, Muslims, women etc is abominable, but we know all this because he is not a seasoned politician and has not learned how to conceal and camouflage his racism.

When Clinton’s guard was down and she did not realise the cameras were rolling, she too called young African Americans “super-predators” who had to be “brought to heel”.

She is the same person – only now she has learned how to camouflage her racism. Trump has not mastered that art. Trump has a different product to sell – himself – and has targeted a different market – white supremacists basking in their racism. The salesman is naked in his fascism, the politician is properly dressed in socially acceptable verbiage.

In choosing Trump over Clinton, Americans are opting to buy the real product instead of a badly packaged camouflage representation of that product.

Clinton is the political mask of the corporate face of America, and this time around Americans wish to see the real face of their government, the rule of corporate America, and not some corrupt politician being funded by them to represent that face with a mask of fair play and warm wishes. 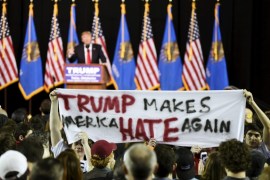 We need to find a means of revitalising the democratic process.