Ahead of Monday’s meeting between the leaders of the European Union and Turkey’s Prime Minister Ahmet Davutoglu on the question of a deteriorating migrant crisis, a top Western politician said: “I want to appeal to all potential illegal economic migrants wherever you are from: Do not come to Europe. Do not believe the smugglers. Do not risk your lives and your money. It is all for nothing.”

What Donald Tusk, president of the European Council, the body bringing together the heads of state or governments of the EU member states, refrained from stressing was that most of these migrants and hundreds of thousands of refugees came to Europe through Turkey, thanks to smugglers operating there.

For Europeans, migration is not so much a financial issue, although there can be serious economic implications, as an International Monetary Fund paper found. It is primarily a political and cultural matter, now threatening to dismantle years of intra-European cooperation.

As Tusk would add in his invitation to European leaders for the meeting with Turkey: “[F]or the first time since the beginning of the migration crisis, I can see a European consensus emerging. It is a consensus around a comprehensive strategy that, if loyally implemented, can help stem the flows and tackle the crisis.”

This cannot be done without Turkey, obviously. Otherwise, why call a special meeting?

The latest UNHCR figures show that the flows of people making the hazardous sea-crossing across the Mediterranean to Europe are increasing.

Already 140,000 made the journey this year, with 90 percent crossing from Turkey to the eastern Greek islands. Most are Syrians, Iraqis and Afghanis, with Syrian refugees benefitting from a privileged status in the EU.

The flows are much higher than equivalent ones during the same period last year which, in turn, were exponentially higher than the 2014 flows. In these last few months alone, over 400 people have died or have gone missing.

The current aspect of the crisis concerns more than 30,000 migrants and refugees stuck in Greece, with over 10,000 waiting at the northern border crossing with Macedonia, as a successive string of countries to the north refuse to let them pass through to Germany, the destination of choice.

The so-called “wave through” policy through the troubled Balkans and central Europe, instigated last summer after Chancellor Angela Merkel decided to welcome refugees into Germany, has collapsed.

Then again, only last May, in the aftermath of a tragic shipwreck off Italy’s Lampedusa Island, the EU’s priority was confronting people-traffickers and stemming arrivals from Libya. In the months that followed, the Greek islands were overwhelmed by arrivals from Turkey.

In November, Paris suffered murderous attacks with hundreds of victims. Reportedly, one of the terrorists had with him a passport proving he had entered Europe through Turkey and Greece.

At the same time, Denmark, Sweden and Switzerland enforced much stricter border controls. And Germany itself, after opening its doors, began to tacitly close them, leading to human bottlenecks from Austria southwards.

Since Greece’s maritime border with Turkey is hard to patrol, never mind control, despite the best common European efforts, the only solutions under the prevailing political climate is to seal off Greece’s land border with its northern neighbours and try make a deal with Turkey.

To mark this new state of affairs, Turkey just received the first $105m in educational and humanitarian aid for Syrian and other refugees on its territory, part of a promised $3.3bn. Negotiations to admitting Turkey to the EU with restart with vigour, too.

Greece, an EU member state, will be given $770m in emergency aid over three years with tough conditions attached as to its obligations to contain the flows of refugees and migrants through its territory, as part of the Europe-wide Schengen border agreement.

One can understand that Libya essentially has become a failed state after the overthrow of Muammar Gaddafi.

As for Greece, its migration policy failures reflect the ongoing financial crisis and the initially liberal approach of a left-leaning government which came to power last year.

That is changing: Third country nationals classed as economic migrants are again being detained pending deportation, judging from International Organization for Migration’s data – most to Turkey, presumably.

Those classed as refugees will have to apply for asylum in Greece and then wait for possible relocation to those countries willing or obliged to take them in.

But what about Turkey? Analysts, both from the pro-US conservative spectrum and the pro-BRIC (Brazil, Russia, India, China) progressive one, talk of a “Muslim invasion” of Europe. They claim it has been instigated by President Recep Tayyip Erdogan, following growing internal dissent, alongside his diplomatic failures regarding Syria and the wider Kurdish issue.

But as journalist Austin G Mackell notes in his analysis of the 2013 Gezi Park protests, it is naive to dismiss Erdogan as a manic despot when so much concurrently is at play. After all, he did win a landslide election with many Kurds voting for his party. For all the disdain in Europe, he simply is being as cynical and calculating as his counterparts.

So is the EU actually rewarding Turkey in order to absorb more refugees and, at the same time, deal with economic migrants in a more authoritarian way?

Moreover, while Turkey’s role in the Syrian civil war has led to an intensification of the conflict, it is not acting alone. As the nature of a new NATO mission monitoring people-traffickers in the northern Aegean would indicate, the West values Turkey as an ally. For now.

Menelaos Tzafalias is a freelance journalist and producer based in Athens, Greece. He has worked as an associate producer on the documentary “Palikari: Louis Tikas and the Ludlow Massacre”, a story about migrants and labour relations in early 20th-century US. 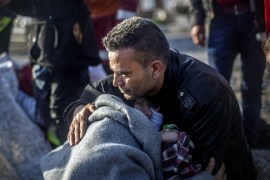