US President Barack Obama recently wrote an article in The New York Times on the issue of gun control in the United States. It’s a passionate article, but it also shows the helplessness of the most powerful man on earth.

Obama does not expect things to change during his presidency or during this Congress, but he seeks to send this message to the American people: “I will not campaign for, vote for, or support any candidate, even in my own party, who does not support common-sense gun reform. And if the 90 percent of Americans who do support common-sense gun reform joins me, we will elect the leadership we deserve.”

Finally, he reminds the American people that “we all have a responsibility”.

Bangladesh is very different from the US, but it faces similar challenges. Each year, thousands of Americans lose their lives because of gun violence.

In the past year in Bangladesh, according to Odhikar, a Bangladeshi human rights organisation, 64 people disappeared, 185 died in extrajudicial killings, and a further 197 died in political violence.

Most of the deaths and disappearances are politically motivated. However, deaths are also occurring for non-political and trivial reasons. The perpetrators are mostly unaccountable, and the bodies are often untraceable. This ought to shame us as a nation.

The degeneration of our society is a root cause. Ours was a healthy society; ours was a caring society. In the not-too-distant past, our people used to follow certain norms in all matters – be they social or political.

There used to be checks and balances in our society, and although change has taken place in all countries, and in all societies, in Bangladesh they are distinct and startling.

READ MORE: The obligations of responsibility

On October 31, the publisher Faisal Arefin Dipan was killed, like others in the past, in broad daylight in Aziz Supermarket. It was a shocking incident, but more shocking was Dipan’s father’s reaction: “I don’t want the trial of my son’s killers as I know I won’t get justice.”

Such a reaction from a bereaved father was the first of its kind in Bangladesh, and it is a sad indictment on society and our governmental institutions. In the face of such dreadful violence and perceived and actual impunity, many in our society see themselves as helpless. We are not helpless, we can and must act.

Every problem has its solution; every crisis has an appropriate response. We – all Bangladeshis – should be courageous enough to find a solution. Ours was, and still is, a resilient nation. We fought against colonial powers, and we fought for democracy. The vast majority of Bangladeshis are still fighting against poverty and fighting for survival. It is this attitude that must be nurtured.

The power of citizens is formidable; if used appropriately, this power becomes invincible. What can be nobler than trying to save the lives of innocent people, to put an end to the culture of disappearances and deaths?

There needs to be a social movement supporting the families of victims, a movement devoid of political agendas, and all Bangladeshis should pledge their support.

We have all seen the children of victims weeping in the press. On December 5, Ridi Hossain, daughter of victim Parvez Hossain, wept in a press conference, saying: “I want to go to school with Dad. Mum has no money, she can’t buy me chocolate.”

Ridi was too young to realise that her father would never return. It is heartbreaking to hear the family members of those disappeared pleading to those responsible to at least return the bodies. It is only the “lucky” ones who are afforded this courtesy.

There needs to be a social movement supporting the families of victims, a movement devoid of political agendas, and all Bangladeshis should pledge their support.

At the outset, we may not be successful, but even if one life is saved, or the members of one family are spared the agony of a lost father, a brother, a sister, or a close relation, our efforts would be justified.

As a nation we all share responsibility in our failure. As a nation – whether one is in the government, the opposition, or a private citizen – whatever one’s station in life, we have a duty to act. We must find the courage to stand up and address the crisis that faces us all.

Let us make an appeal to the heads of all political parties not to give shelter to criminals. Let us appeal to all members of parliament, to all government functionaries, and holders of all public office, and to all those who have some influence in society. This is a national crisis, and as such it requires a national response that runs across party lines and unites our society.

Let us resolve to fight and make our country a safer and more dignified place to live for our present and future generations.

Abdur Razzaq is currently a practising barrister in the English Bar. 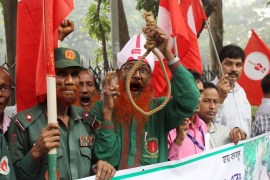 The government sees the executions as a part of a long quest for justice whereas its opponents see them as revengeful.

What Ethiopia needs is less, not more, ethno-nationalism