In the course of a few days, the United States and France reportedly conducted military operations in Libya against the Islamic State of Iraq and the Levant (ISIL). That is not new: Both countries have allegedly been involved in special forces operations in the North African country for the past two years.

At first, the targets were linked to al-Qaeda in the Islamic Maghreb and al-Mourabitoun. Now the emergence and the fast expansion of ISIL in Libya is a game changer. Some countries consider that time is of the essence, and that they cannot afford to sit around and do nothing.

The US is one of them: the commander of their special forces in Africa believes that Libya will need the US to defeat ISIL.

On February 19, in concert with Britain, France and Italy, the US conducted an air strike on an ISIL camp in Sabratha, killing at least 41 people, Tunisians for the most part.

The main target was a man who had links to attacks in Tunisia at the Bardo Museum in March and Sousse beach in June 2015. The jihadists were allegedly planning more attacks in that country. Interestingly enough, the US warned neighbouring Algeria about the raid only minutes before it took place.

The presence of Western special forces is an open secret: French, US and British forces are likely to be on the ground.

Indeed, it is interesting that the question is not whether French special forces are in Libya or not, but whether they are taking part in military operations.

French special forces have reportedly been helping Libyan troops to battle ISIL fighters in Benghazi for two months. Le Monde, the French newspaper, has revealed the extent of the presence of French undercover operations in Libya. It has also discovered that France provided the intelligence that led to the killing of ISIL leader Abu Nabil in a strike in Derna in November 2015.

In January, the Libyan National Army, known as the LNA, claimed France carried out its first strikes against ISIL in Sirte and Bin Jawad. Coincidence or not, the son of General Khalifa Haftar, the LNA’s leader, was in Paris in early January, probably to coordinate military operations.

The political stalemate is ongoing with Libya's two governments having competing patrons: Tripoli supported by Qatar and Turkey, while Tobruk gets the nod from the West, Egypt and the United Arab Emirates.

The recent victory of the LNA in Benghazi in kicking out ISIL and Ansar al-Sharia forces from some parts of town may be the proof that Western help could have been a deciding factor.

Other international actors might get involved. The European Union has also reached out to General Haftar, whom they consider the only viable option for taking on the various jihadist groups. What is interesting is how General Haftar is reaching out to Russia as well.

The latest US raid on ISIL in Sabratha seemed to have pushed some of its members to move towards the Tunisian border. The risk of a larger Western intervention may have incited ISIL fighters to leave their bases in Libya and head south, potentially putting both Niger and Chad at risk.

In the light of this, it is not surprising that Niger’s president repeats what he has said over the past two years: Foreign intervention in Libya is a must.

Moreover, neighbouring Algeria is said to have amassed 50,000 soldiers at its borders with Tunisia and Libya, and beefed up drone and plane surveillance to counter jihadist threats.

Little doubt is left about a Western military intervention in Libya: For instance, Egypt’s foreign minister said in Washington that Libya intervention should wait. That meant not if but when.

The timing may be sooner than later. Indeed, the French aircraft carrier Charles de Gaulle, which was sent to the Gulf in December to strike ISIL in Syria after the November Paris attacks, has been recalled to the Mediterranean, probably to go to Libya. It will carry out joint exercises with Egypt – a country very concerned about ISIL’s activities in Libya that conducted air strikes there in 2015.

This shows how Libya has replaced Syria and Iraq as the top military priority, especially for the Europeans. The rapid expansion of ISIL in Libya in terms of fighters, leaders and territory is a huge cause for concern for the West: In December, the United Nations estimated that ISIL had between 2,000 and 3,000 fighters in Libya, and now the US is talking of 6,500 fighters.

Additionally, reports of ISIL leaders leaving Syria for Libya and calling for new recruits to join them there prove the central importance of the country for the group.

Some pundits in Washington are calling for Western air strikes on ISIL in Libya now, claiming there is no need to wait for a unity government.

The political stalemate is ongoing with Libya’s two governments having competing patrons: Tripoli supported by Qatar and Turkey, while Tobruk gets the nod from the West, Egypt and the United Arab Emirates.

Patience is running thin and there is speculation that if a national government is not agreed upon soon, Italy may push a plan to split Libya into three mini-states.

In the meantime, countries such as France or Britain cannot afford to witness a massive terror attack at home that would have been planned in Libya. Sadly, in light of this, more chaos and violence are in store for Libya. 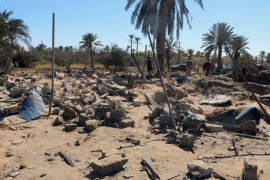