For almost four years, Toronto mayor Rob Ford was at the centre of the world’s media.

We joked at the hard-drinking, crack-smoking Toronto Mayor, whether multi-tasking while driving his Cadillac Escalade in traffic, bumbling in front of the cameras or sharing crack cocaine with gang members. The city’s chief magistrate went on murderous rants or incoherent late-night appearancesat fast food joints.

Journalists had a love-hate relationship with him. He was a never-ending eruption of nonsense and demagoguery. His antics sold newspapers and guaranteed ratings. As for the negative coverage, well, that was just a left-wing media conspiracy against him and his followers.

During all of this, Toronto was held hostage. For four years, one of North America’s largest cities turned into a circus.

All of which should sound familiar to those following Donald Trump’s presidential bid south of the border.

The world’s news organisations have produced extensive, comprehensive multi-media obituaries on former Toronto Mayor Rob Ford. He died at age 46 on Tuesday from the rare and aggressive cancer pleomorphic liposarcoma. Still, we read, he lived as if nothing could kill him.

Yes, Ford was paunchy, punchy, and a punchline. He rarely showed up before noon, he often disappeared after lunch. He was called racist, sexist, homophobic and combative, even bellicose.

He promised subways nobody could afford, vowed to “stop the gravy train” at city hall, and claimed to have saved taxpayers “a billion dollars” – which nobody ever did find.

Most notably, he made his personal phone numbers public. So when there was a complaint from a constituent about, say, a pothole, he would show up with a road crew to fill it.

His antics sold newspapers and guaranteed ratings. As for the negative coverage, well, that was just a left-wing media conspiracy to him and his followers.

To voters, his angry, anti-government, anti-tax and anti-establishment supporters, he was the king of “Ford Nation”.

As Gawker, the website that broke the Ford crack smoking story, put it, he was the “hero to losers everywhere”.

But Ford was no loser.

Not only would he win city council seats again and again and again, he took the mayoralty in 2010 with a healthy 47 per cent of the vote, most of it in the less affluent Toronto suburbs.

He won despite revelations during the campaign that he had been arrested for drink-driving and pot possession in Florida in 1999 and that he had drunkenly berated a couple at a hockey game, later not only denying the incident but claiming that he hadn’t even been in the arena.

When he proudly donned his chain of office at his swearing-in, the downtown elite, the political classes and the media were knocked for a loop – just like the 63-year-old female city councillor he would tackle during a raucous 2013 meeting at which he was stripped of most of his mayoral powers.

The country never tired of videos of Ford falling while attempting a football pass, drunkenly wandering a Greektown street festival, physically charging reporters in his driveway and smoking crack in his troubled sister Kathy’s basement.

He appeared repulsive and riveting, pathetic and privileged.

Born into affluence, Ford was the youngest of four. His father, Douglas Sr, who died in 2006, had served one term as a Conservative member of the Ontario legislature and owned a successful label-making business.

Diane, the Ford matriarch, is no pushover. When her son was struggling with addiction – and his sister Kathy summoned the media to her home – she publicly scolded him, denied his failings yet defended him as a mother bear would defend her cub.

All Ford’s life, his family has been shrouded in a cloud of drugs and violence.

Eldest son Randy was involved in the drug trade. Kathy’s former lover shot and killed her ex-husband. Her later partner would be charged with shooting her in the face.

Older brother Doug, who shared his sibling’s political ambitions but none of his populist appeal, had a reputation as a hash dealer in his youth – and Rob’s enabler as an adult.

It’s difficult not to view the family as dysfunctional, despite its wealth.

At the height of it all in 2014, he did the round of US morning news and late night comedy programmes. Ford revelled in it, at least until he appeared on ABC’s Jimmy Kimmel Live! where the host confronted him with a damning montage of his antics and the kind of hardball questions that no serious Canadian journalist ever had the opportunity to ask.

Halfway through the segment, Kimmel attempted an intervention: “You seem like a very nice guy to me, and if you are an alcoholic – which, you know, if you’re drinking enough that you can try crack in your 40s and you don’t remember it – maybe that’s something that you might want to think about talking to somebody about.”

Ford’s sycophantic allies in the right-wing press called it an “ambush“.

But it really was the warning shot he had to hear and yet, it was ignored or came too late. That summer, just before he began his run for a second term, Ford entered a rehab clinic – where it’s believed he learned of his cancer.

But, in Toronto’s newsrooms, they were already prepared for the worst.

It was just a matter of dusting off the death notices written and edited years ago, and plugging in the date, the cause and the terribly young age.

Robert Bruce Ford is survived by his wife, Renata; his children, Stephanie and Douglas; his mother, Diane; brothers, Randy and Doug; sister, Kathy and many nephews and nieces. 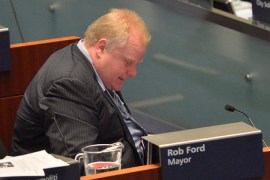 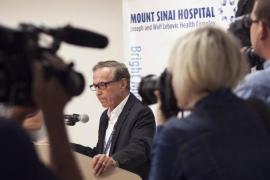 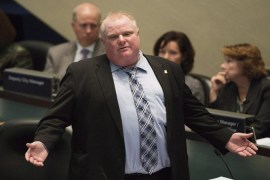 Emergence of footage coincides with Rob Ford’s decision to take a leave of absence and seek help for substance abuse.