While it was written that God warned Noah about the coming flood, in Iraq this week it was the US embassy who issued an alert warning that the Mosul Dam could burst. Such is the potential for “catastrophic failure” that the embassy advised that US citizens should leave the Tigris flood plain.

As if Iraq hasn’t suffered enough the scenarios around the Mosul Dam collapsing are both real and terrifying and should provide all interested parties with an urgent wake-up call.

If the dam bursts more than a million and a half people are at direct risk of being hit by a lethal tsunami some estimate could be up to 24 metres high.

Six million more could be affected with the predicted flow taking out power stations, agriculture, countless homes and even washing up in Baghdad – some 650km downriver – with 4 metres of water shutting down the airport.

Not fit to cope

Iraq is not in a fit state to cope with this kind of scenario which would throw countries that were at peace into chaos. Already 3.3 million Iraqis are internally displaced largely in the centre and north of the country.

Ten million people, a third of the population, are dependent on humanitarian assistance, a number double that of a year ago. 40km down the Tigris away from the dam lies the city of Mosul that was hit by waves of ISIL fighters in 2014 and now faces a very different type of threat.

Whatever the perils of life under ISIL, Mosul residents will look nervously to what any major conflict will mean for their city.

Despite the warnings from the US embassy, moves are being made to recapture the city with a new offensive launched this week in an area northwest of the city of Samarra looking to cut off the Islamic State of Iraq and the Levant (ISIL) group’s supply lines.

Whatever the perils of life under ISIL, Mosul residents will look nervously to what any major conflict will mean for their city. The ruins of Ramadi are a smouldering reminder of how the Iraqi Government had to destroy the city in order to win it.

A conspiracy theorist might suggest that the US embassy could have issued the warning as a way of prompting an exodus from Mosul, but the chequered history of the dam suggests otherwise.

The vast project in some respects symbolises the failed grandeur of the Saddam era. Engineers warned that it was built on dangerously unstable foundations back in the 1980s.

Water eats away at the soluble gypsum base that the dam is built on meaning that daily repairs are needed to counter erosion. ISIL briefly took control of the dam for 11 days in 2014 and reportedly many engineers haven’t returned.

Yet the ticking time bomb that the dam has become has not been ignored by the government in Baghdad. Indeed, Italian forces and engineers are to be deployed to help avert a crisis.

Iraqi officials appear to be less worried than US diplomats, with the Muhsin al-Shammari, the water minister, saying the risk is a thousand to one, while Prime Minister Haidar al-Abadi has reassured that “all necessary measures” have been taken and that a collapse is “highly unlikely”.

It is worth remembering that unlike so many challenges facing Iraq, the collapse of the dam is an environmental disaster that takes no heed to ethnicity or sect. Saddam’s home town of Tikrit is in the range of any flood, as is the city of Samarra, home to Shia holy sites including the al-Askari Mosque.

Abadi may argue that he is damned if he does and damned if he doesn’t. He could say that everything that can be done to secure the site is being done and that he cannot move resources from elsewhere, especially with oil exports below planned levels.

ALSO READ: The dawning of hydro-terrorism

While people can’t expect Abadi to build an ark, there is certainly an argument that instead of the record-breaking tall towers being built in Basra, urgent and rapid investment could be channelled into the Badush Dam.

The incomplete Badush Dam lies downstream of the decaying Mosul Dam and if completed could help protect against the flood risk if any “catastrophic failure” were to occur.

So much of the Abadi premiership has been defined by the fight against ISIL that it is no surprise for him to see that as his top priority.

However, it is the mark of a statesman to make decisions that are in the greater interest of the entire country.

Ensuring the integrity of the country’s water systems against potential apocalyptic scenarios has to be at the top of Abadi’s agenda. 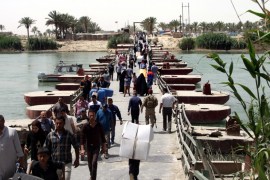 Euphrates: River of hope or hate?

Historic overexploitation of the river is accelerated by the violence that has gripped the region. 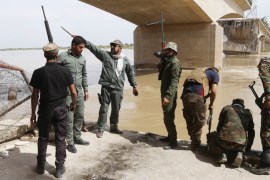 ISIL threatens to flood downstream towns and deprive them of a resource for daily survival and irrigation.