After five years of brutal conflict, which started with peaceful protests against decades of dictatorship, the Syrian crisis has reached a turning point. The military intervention of Russia has enabled the regime of President Bashar al-Assad to consolidate its position and dictate terms to its Syrian opponents – and their hesitant Western and Arab backers.

The alternatives are either acceptance of a political process designed essentially to legitimise a relaunched Assad regime, or else further death, destruction and depopulation.

Political leaders in Europe, the United States and many Arab states have shown that they have no appetite to confront Assad and his Russian and Iranian backers.

The argument that Assad’s regime is the root cause of the refugee crisis and of the aggravated terrorism threat is widely understood in Western policy circles, but short-term political considerations have pushed policymakers towards the apparently perverse conclusion that dealing with Assad is the best way of tackling these problems.

Having conceded military and political ground to the Assad regime, the West’s main remaining leverage in the conflict is economic. Through contributions to the United Nations and through aid programmes – in which the biggest donors are the US, UK, Germany and Kuwait – Western and Arab governments are picking up much of the bill for the humanitarian consequences of the conflict. This includes caring for the 4.8 million refugees around Syria’s borders and channelling assistance to more than 10 million within Syria, in both regime and rebel-held areas.

The regimes of Bashar al-Assad and his father, Hafez, have been adept at extracting aid from donors of all stripes on political and economic conditions that have rarely been fulfilled.

The situation has advantages for the regime, as it shifts a large part of the financial burden of administering the state onto the shoulders of others. However, the regime’s own economic position remains precarious, and any political settlement to the conflict will need to be underpinned by substantial economic support, primarily from the West.

In setting out the terms for such support, the West has the opportunity to exert pressure for changes in governance that could go some way to meeting opposition demands for meaningful institutional reforms.

Hard numbers on the economic impact of the conflict are hard to come by, but some indicators give a sense of the extent of the devastation. The resident population of Syria was 20.8 million in 2010, according to the state statistics agency; it is now likely to be only 15-16 million.

Real gross domestic product was contracted by 63 percent between 2010 and 2015, according to estimates by the Syrian Center for Policy Research. The Syrian pound has depreciated by almost 90 percent against the US dollar since 2010.

OPINION: Five years on, we must seize sliver of hope for Syria

The dollar value of the state budget is now about a fifth of what it was before the conflict. The consumer price index has risen by 450 percent since 2010.

Electricity generating capacity has fallen from almost 10,000MW to less than 2,000MW. Abdallah al-Dardari, a former deputy prime minister who now heads a UN economic agency based in Beirut, reckons that it will take an investment of $180bn to restore its GDP to the 2010 level of $60bn.

Besides the UN, the economic mainstays of the regime are Iran, Russia and sections of the Syrian private sector.

Iran has provided credit lines to finance oil supplies and the provision of goods and services by Iranian companies. It is also a major source of military aid in the form of equipment, Islamic Revolutionary Guards Corps troops and Shia militias from Lebanon, Iraq and Afghanistan.

Russia’s support is mainly military; it has turned down requests from the Assad regime for economic aid.

Syrian private businesses have been given opportunities to invest in redeveloping destroyed urban areas, and they have reaped considerable profits from the war economy, but their resources have been eroded by inflation and the depreciation of the currency. The dollar value of the assets of Syria’s 14 private banks has sunk to $3bn, based on their end-2015 balance sheets, from $14bn in 2010.

These core supporters of the regime lack the resources to finance reconstruction. The regime can be expected in due course to suggest that it should receive some economic incentives to continue to engage with the political process mapped out in UN Security Council resolution 2254.

Western governments should treat any such approaches with extreme caution. Any concessions on economic sanctions or promises of economic aid should be subject to stringent conditions.

These should include political benchmarks, such as adhering to the provisions of resolution 2254 on the release of political prisoners, allowing unfettered access for humanitarian aid, and enabling the opposition to participate fully in the operations of a transitional government. They must also provide for intrusive external supervision of the funding operations themselves.

The regimes of Bashar al-Assad and his father, Hafez, have been adept at extracting aid from donors of all stripes on political and economic conditions that have rarely been fulfilled.

If Western donors sense that they are at risk of being strung along again, they should hold firm, and focus their efforts on ensuring that refugees and people in need within Syria are adequately supplied with humanitarian support, including education, training and possibilities of employment.

These efforts should extend to supporting civil society in opposition areas, where the revival of protest demonstrations following the recent reduction in violence has shown that an important segment of the Syrian population remains committed to bringing an end to the Assad tyranny. 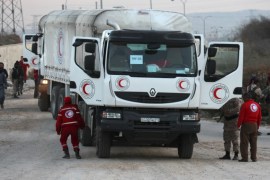 Aid trucks start entering besieged areas as the UN urges warring parties to use aid delivery as a “first step” to truce. 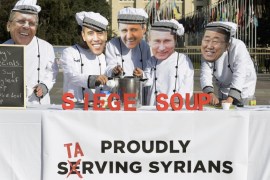