Trump’s declaration was neither rhetorically novel or substantively different from his string of campaign slanders on Islam. The very idea that a religion could hate a people is a preposterous statement. But, the statement is rooted in the very ignorance and hate that sprung Trump’s Muslim ban proposal, which made him the darling of bigots and surged him up the polls.

Islamophobia – the suspicion and fear of Islam and its 1.7 billion adherents – was less political ideology for Trump, but carefully constructed and tactfully deployed campaign strategy.

The timing of his most recent vilification, at an impasse when Cruz is gaining delegates and the Republican establishment effort to “dump Trump” is a directive.

“I think Islam hate us” is a call to action to his voting base, to further galvanise them around a disdain for Islam that not only heightens hateful fervour at his rallies, but incites violence on American blocks and pushes bigots to the ballot box.

A calculated and causal strategy

Political Islamophobia is framed as deviant and aberrational. Trump’s banal slanders, Ben Carson’s statement that a “Muslim couldn’t be president“, or the extensive string of slurs uttered by other presidential hopefuls are generally said to be off-the-cuff opinions, not representative of a vast lot of Americans.

This view overlooks the coordination and planning of Islamophobic statements, the mediums in which they are made, and the immediate impact on growing segments of the electorate that subscribe to the view that “Islam hates us”.

Trump is by no means the first modern politician to capitalise off Islamophobia. He follows a list of elected officials, most notably George W Bush, and presidential hopefuls who have wielded it as a platform and political strategy.

Trump did not make his most recent slander of Islam in private. He issued it during a primetime television programme, to CNN’s Anderson Cooper, with millions of viewers and voters glued to the screen.

It instantly became the lead news story leading up to the GOP debate. And collaterally, it filled the airwaves of news outlets nationally and made Trump the lead headline as the presidential campaign marched into Florida and Ohio – pivotal primaries that would likely determine the next Republican nominee.

Stuck between a narrowing lead and growing Republican opposition, Trump did what he does best: bash Islam. A trusted tactic that makes his campaign the lead story, and mobilises his motley base of supporters to vote in droves.

While 60 percent of Republican voters support Trump’s Muslim ban, this number is presumptively higher for Trump supporters. Seventy-five percent of South Carolina voters, where Trump won handily, support the ban. Support for the ban was even higher in Alabama and Arkansas at 78 percent, where Trump won by roughly 22 percent and three percent, respectively.

Therefore, Trump’s “I think Islam hates us” should be viewed as his campaign’s “Muslim Ban 2.0”: a strategically timed call-to-arms against Islam, and cleverly declared call-to-vote to his loyal legions of Islamophobes in order to manifest their hate of the faith and its followers into votes in the ballot box.

And to deliver him Ohio and Florida, which very well may grant Trump the Republican nomination – and a narrower path to the White House.

The Trump campaign’s greatest contribution is the way it unveiled US racism and bigotry and the timely burial of the “Post-Racial America” myth. If the election of Barack Obama, a black man, signalled the decline of American racism to some, then the rapid political ascent of Trump and the resonance of his hateful message symbolises that racism in the US is alive, robust, and intensifying.

Trump is by no means the first modern politician to capitalise off Islamophobia. He follows a list of elected officials, most notably George W Bush, and presidential hopefuls who have wielded it as a platform and political strategy.

OPINION: Politics of disillusionment and the rise of Trump

But Trump has perfected it. For his campaign, Islamophobia is political craft – every soundbite carefully assembled and strategically disseminated – designed to inspire the brazen hate spewed by his supporters, and embolden the racist hate unfolding at his pep rallies.

The violence that climaxed on Friday in Chicago, where melees between Trump supporters and anti-Trump protests broke out, led to the postponement of his rally at the University of Illinois at Chicago.

A coalition of Black, Muslim and Latino students – the very demographics targeted by Trump – came together to shut down the rally. For one night in Chicago, it was Trump who was ejected from his own rally.

Trump – the man, not the politician – may not be a racist. But it doesn’t matter. He has become the undisputed embodiment of modern racism in the US. His rallies offer snapshots of the racist mayhem and minority “deportations” his rabid supporters romanticise about; his unfiltered soundbites reveal what his loyalists fantasise about and wish they could say, and his clash of civilisations rhetoric is the very religious crusade his voters think the US is heading towards.

For demagogues, what they actually believe is far less important than what they lead others to believe. Trump invested fully into the politics of hate, building his presidential brand upon and around it.

In the US today, the word brand Trump is becoming less and less associated with skyscrapers and luxury developments, and synonymous with the expansion of racism and the incitement of Islamophobic violence. The US he promises, divided along lines of religion and race, was on full display in Chicago on Friday evening. 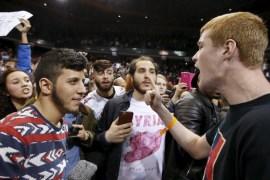