Lebanon is a diverse and industrious nation and that’s a cause for celebration. But the Lebanese are a divided people, and that is a major cause for trepidation.

Since its 14-year civil war ended with a peace accord signed in Saudi Arabia in November 1989, Lebanon has tried hard to maintain its plurality while at the same time “managing” its sectarian divisions.

But many Lebanese insist that they could only do so much against the regional odds; that their nation is a victim of conflicts instigated or manufactured by foreign powers that projected their differences on to this open and all-too-fragile nation.

They grumble about foreigners waging proxy wars on Lebanese soil. And there is some truth to that. Just as much truth as in the fact that they have been the local foot soldiers abetting, enacting and executing these wars and conflicts.

So much so that at times it’s not clear whether foreign powers exploited the Lebanese to advance their regional interests, or whether the Lebanese factions used foreign assistance to fight each other and expand their own narrow interests.

A decade of tensions

Over the past decade, most of the regional tensions projected in or on Lebanon were between the allies of Syria and Iran, and those allied with Gulf and other Arab states.

Lebanese tensions peaked after the assassination of Prime Minister Rafik al-Hariri in February 2005, leading to the Cedar Revolution – a series of mass demonstrations demanding the withdrawal of Syrian forces from Lebanon and the establishment of an international tribunal to investigate Hariri’s assassination, which they blamed on Syria and Hezbollah.

Riyadh and its Gulf allies have grown exasperated with Hezbollah's growing influence over the Lebanese state. They accuse it of causing the country's political paralysis and its presidential crisis.

Syrian forces withdrew soon after in April and the United Nations established the tribunal. But Lebanon continued to simmer, leading to a series of assassinations and sporadic violence in addition to two wars against Israel.

During the initial turbulent period, the Lebanese political factions consolidated into two opposing blocs: the March 8 coalition of pro-Syrian and pro-Iranian groups, and the March 14 coalition that leaned closer to Gulf and Arab positions.

The labels came after two of their massive March 2005 demonstrations galvanised and polarised the entire country.

The following decade had its ups and downs with the two blocs competing and conflicting, and at times reconciling in coalition governments. But this was a decade of more downs than ups.

A case in point has been the regional crisis over Syria that has polarised the Lebanese. Except this time it wasn’t over Syria’s intervention in Lebanon, rather over Hezbollah fighting in Syria on the side of Bashar al-Assad and the Iranian regime.

Riyadh and its Gulf allies have grown exasperated with Hezbollah’s growing influence over the Lebanese state. They accuse it of causing the country’s political paralysis and its presidential crisis. Lebanon hasn’t had a president for two years.

They are also angered by Hezbollah’s anti-Saudi activities in Syria, Yemen and other Arab countries.

Fed up, Saudi Arabia announced this week that it was halting $4bn of military and security aid to Lebanon. And along with the UAE, Kuwait, Qatar and Bahrain, they are suspending all travel by their citizens to Lebanon.

All of which has forced Lebanese Prime Minister Tammam Salam to make conciliatory statements in support of Saudi Arabia and in support of Arab unity (vis-a-vis Iran).

But Riyadh is not satisfied and more punitive actions will be forthcoming if the Lebanese government doesn’t take certain measures to restrain Hezbollah.

If the kingdom and its allies further escalate their punitive measures against Lebanon, as some Saudi officials warned indirectly, it could badly hurt the struggling Lebanese economy.

For example, limits on – or a ban of – Lebanese businesses and expats could have a major financial and psychological effect on Lebanon. Remittances from Lebanese citizens in the Gulf comprise a significant chunk of its $80bn economy.

According to the World Bank, of the $6.7bn in remittances annually, 70 percent come from Lebanese expatriates living in the Gulf states.

Likewise, if the Gulf states decide to pull their deposits from Lebanon’s central bank, and suspend all investment in its real estate, an important factor in economic growth, the Lebanese currency and economy could suffer badly.

Lebanon is in a bind

Hezbollah has lost its raison d’etre, but it is not about to sever its relations with Iran, or stop its destabilising activities. And the March 14 block can hardly neutralise Hezbollah without an escalation to civil war that no one can win, but which could destroy the country.

Worse, a growing number of Lebanese and Arabs fear Hezbollah is maintaining the current political paralysis because it is bent on changing the entire governing system in Lebanon to suit its interests.

This means scrapping the Taif political accord reached in Saudi Arabia in 1989, and replacing it with one that advances its influence and eventually strengthens Iran’s role in the eastern Mediterranean.

To be clear, changing a quarter of a century’s transitional system based on a sectarian division of authority should be welcomed, but not if it leads to an imbalance of power where one group dictates policy to the rest. It was this unjust system that led to the Lebanese civil war in the first place.

In sum, the national and regional dynamics have become so intertwined in Lebanon that it is hard to see how Lebanon could emerge from them politically stable and economically sound.

Only if they pull back from the brink and act wisely by putting the interests of their country first will they be able to save themselves from the regional turmoil; starting with Hezbollah ending its reckless military adventures in Syria on the side of dictatorship; and eventually, reaching a consensus on the best way forward for the country. 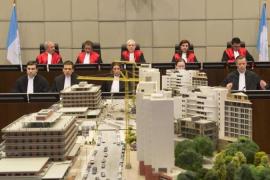 Will the Special Tribunal for Lebanon untangle the current political deadlock?