Gloria Steinem’s now infamous comment about young women flocking to presidential candidate Bernie Sanders because “the boys are there” is only one aspect of the current Hillary Clinton versus Sanders debate that has given me – a 40-something feminist – pause.

Other Clinton supporters have claimed that the young women supporting Sanders are riding on the successes of the older feminist generation, taking many of the 1970s achievements for granted. Rather than continue the struggle to ensure reproductive rights, this young generation is focusing on socioeconomic inequalities and not on ostensibly proper feminist issues.

For Steinem, Madeline Albright and others, then, the younger generation has abandoned identity politics, thus betraying the legacy of the women’s movement. Albright’s equally recent and ill-famed quote about a “special place in hell for women who don’t help each other” speaks volumes about this feeling of betrayal.

Identity politics is no longer relevant

There is no doubt that identity politics has been an incredibly powerful and empowering strategy in the United States political landscape. In the 1970s and 1980s, it was part of an historic attempt to claim recognition and rights for women, African Americans, the lesbian, gay, bisexual and transgender (LGBT) and other minority populations. Black Lives Matter, the most important mobilisation in the past few years, is also based on identity politics. Yet, identity politics is no longer the privileged ground of progressives.

The kind of feminism that Clinton and her supporters represent is deeply disturbing because it is repeating past mistakes while ignoring the wider structural issues of gender justice. It is a kind of trickle-down or neoliberal feminism.

Indeed, when George W Bush appointed Colin Powell and Condoleezza Rice to two of the most powerful government positions, it became strikingly clear that not only was Bush incredibly savvy, but also that having the most diverse administration in no way translates into progressive politics.

More recently, the French nationalist Marine Le Pen has been advocating women’s rights as part of her campaign against French and migrant Muslims, while Geert Wilders, the founder and leader of the conservative Freedom Party in the Netherlands – who compared the Quran to Adolf Hitler’s Mein Kampf – has invoked LGBT and women’s rights to attack and undermine religious freedoms, particularly of Muslims. Indeed, identity politics can be used by conservatives just as well and effectively as by progressives.

Thus, when I hear colleagues and friends declaring that they will vote for Clinton because she is, well, a woman, I am dismayed.

What does this kind of statement mean?

There is little disagreement, even among her feminist advocates, that Clinton’s policies are reformist domestically and hawkish internationally. And while her support for the invasion of Iraq, and her unwillingness to denounce Israel’s 50-year colonisation of the Palestinian people may be abstract in the imagination of young American voters, her intricate ties with Wall Street are not.

Even more concrete for young women is Clinton’s criticism of Sanders for advocating a one-payer health insurance system. Obamacare has certainly expanded coverage and made it more affordable, but most individuals still need to buy insurance to access care.

Sanders is promoting a national and universal “Medicare-for-All” system found in many developed nations. In this system, every citizen would be automatically enrolled and receive health insurance, including the 33 million US citizens who are still uninsured, even after the introduction of Obamacare.

OPINION: Hillary Clinton and the authenticity of her feminism

Sanders’ vision, Clinton has claimed, is unrealistic and, even worse, destructive. She is unwilling to commit to universal government-funded healthcare and instead wants to expand Obamacare by reducing co-payments and introducing other strategies that benefit the middle class but not the poor. “We had enough of a fight to get to the Affordable Care Act,” she recently said. “So I don’t want to rip it up and start over.”

What many young women heard was Clinton admitting that she was unwilling to stand up to the corrupt system of HMOs and private health insurance companies. And because young women are smart, they also drew a connection between Clinton’s agenda and her intimate links with lower Manhattan.

Young women do not want to make the same mistakes as white feminists did in the 1970s and 1980s. They understand, for example, that all US citizens – but especially women – would be better off with a one-payer system because this would promise comprehensive and good healthcare for all. This latter line of thinking simply echoes the incisive black feminist criticism of liberal feminism (PDF) for its narrow focus on abortion and “choice” rather than on the more inclusive fight for reproductive justice.

Role models are important. But I will not vote for Clinton because she is a woman. The idea that having a woman in office will automatically make the lives of most US women better is wrong-headed.

US women live very different realities and often require very different things in order to ensure that they can live a dignified and meaningful life. Moreover, a feminism that does not take into account the way in which women exist in a stratified hierarchy of existence – stratified by race, class, sexuality, religion, nationality and many other categories – is a myopic one; one that ultimately reifies much of the status quo while making life better for a small percentage of upwardly mobile – and most often – white women.

The kind of feminism that Clinton and her supporters represent is deeply disturbing because it is repeating past mistakes while ignoring the wider structural issues of gender justice. It is a kind of trickle-down or neoliberal feminism.

As difficult as it may be for many progressives, it is high time to recognise that identity politics is no longer the stronghold of the left. As a radical colleague put it to me just the other day, political responsibility cannot and should not be reduced to identity.

Catherine Rottenberg teaches 20th-century American literature and feminist theory, and is the author of Performing Americanness: Race, Class, and Gender in Modern African-American and Jewish-American Literature. 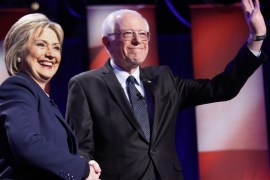 Coronavirus and the banality of evil