For the past few years, the South and East China Seas have been at the centre of Beijing’s security calculus. Since 2009, China has pursued its maritime claims in adjacent waters with particular ferocity, dispatching an armada of paramilitary vessels to the Japanese-controlled Senkaku/Diaoyu islands, while more aggressively disrupting Vietnamese and Filipino energy exploration activities within their respective waters in the South China Sea.

By 2012, after weeks of tense standoff, China managed to wrest control of the Philippine-claimed Scarborough Shoal, which lies within the Philippines’ Exclusive Economic Zone but is 900km away from China’s southernmost province of Hainan. Having consolidated its control over the Vietnamese-claimed Paracel chain of islands in the northern portion of the South China Sea, Beijing has spent the past two years building a sprawling network of dual-purpose bases across artificially augmented disputed features in the Spratly chain of islands.

The sheer scale and speed of China’s maritime assertiveness in the area has provoked a largely dovish Obama administration to more aggressively conduct Freedom of Navigation Operations close to Chinese-occupied land features in the South China Sea. Meanwhile, the constitutionally pacifist Japan has stepped up to the challenge by augmenting its defensive position in the East China Sea, recently approving its biggest ever defence budget to counter Chinese maritime ambitions.

The landslide election victory of the pro-independence Democratic Progressive Party in the latest Taiwanese parliamentary and presidential elections, however, could dramatically shift Beijing’s strategic focus to what it considers as a renegade province. Taiwan is once again at the centre of the global geopolitical chessboard, with both Beijing and Washington carefully considering their options.

Though the majority of Taiwan’s population are of mainland Chinese descent, particularly from southern provinces of Fujian and Guangdong, the island nation has historically preserved a distinct identity. For the past centuries, it has experienced Chinese suzerainty, European colonisation, Japanese occupation, and a short-lived period of formal independence under the former rulers of China, the Kuomintang.

Against the backdrop of rising anti-China sentiment, Tsai Ing-wen and her allies in the Democratic Progressive Party managed to capture, for the first time in history, both the office of the president and the parliament, respectively.

But Taiwan, which hosts much of China’s greatest treasures, never entirely severed its umbilical cord with the mainland. If anything, it actually played a key role in China’s industrialisation in the past three decades. Taiwanese foreign direct investments in the mainland exponentially increased from only few million dollars in the 1980s to as much as $9.9bn in 1993.

Three years later, the figure reached a whopping $40bn, tantamount to 5 percent of Taiwan’s gross domestic product. Nonetheless, as a prosperous and democratic nation, Taiwan never felt fully comfortable with the idea of integrating into a Beijing-led Greater China.

Amid a blossoming economic relationship with China, Taiwanese leaders began to agitate for formal independence, culminating in the 1995-1996 Taiwan Strait Crisis, which saw Beijing openly threatening Taipei with military invasion – but no actual invasion or attack was planned.

Bound by the 1979 Taiwan Relations Act, which compels Washington to aid Taiwan against threats from the mainland, the United States responded by dispatching two aircraft carriers to keep China at bay. Recognising its military inferiority, Beijing backed down in momentary humiliation, but spent the next two decades obsessively honing its conventional and asymmetrical military capabilities.

The whole episode was a poignant reminder of the delicate nature of cross-strait relations. Worried about the prospects of conflict, the Taiwanese electorate opted for a more calibrated cross-strait diplomacy, represented by President Ma Ying-jeou, who oversaw a golden age of Taiwan-China relations, paving the way for a dramatic increase in bilateral trade, investments, and people-to-people interaction.

OPINION: Can democracy work in a Chinese culture?

It didn’t take long, however, before the Taiwanese electorate, particularly the youth, began to oppose what they saw as a scandalously cosy relationship between the Ma administration and autocratic China. Gradually, people came to worry about the growing Chinese economic grip on Taiwan, which became dangerously dependent on the mainland market.

In 2013, China absorbed as much as 40 percent of Taiwan’s exports, amounting to $121bn. Things came to a head the next year, when ongoing negotiations over the controversial Cross Strait Services Trade Agreement sparked massive protests, giving birth to the “sunflower movement“.

Back to the future

Beyond the concern over corruption, growing inequality and the prospects of Taiwan being entirely sucked into the Chinese economic sphere, the protests were fundamentally about reassertion of Taiwanese identity.

Back in 2008, when Ma was elected to office, as many as 43 percent of people expressed their attachment to both Taiwan and China. By 2014, that number was down to 33, with as many as 60 percent of the respondents identifying themselves as (exclusively) Taiwanese.

OPINION: China and Taiwan – normal is the new normal

Against the backdrop of rising anti-China sentiment, Tsai Ing-wen and her allies in the Democratic Progressive Party managed to capture, for the first time in history, both the office of the president and the parliament, respectively. This represents nothing short of a potential regime change, given the DPP’s left-leaning socioeconomic policies as well as its refusal to acknowledge the 1992 Consensus on the “One China Principle“.

No wonder then, that Tsai’s election was immediately met by stern warning from Beijing, which is considering a military option to stave off a fully-fledged Taiwanese bid for independence. In response, the Obama administration is also preparing for any possible contingency, having cleared more than $12bn in arms sales to Taiwan in recent years. Astonishingly, China is now openly threatening US companies with sanctions if they continue to provide arms to Taiwan.

They say all politics is domestic, but Taiwan’s domestic politics carries major ramifications for the region and beyond. The world will carefully watch out for Tsai’s next moves. 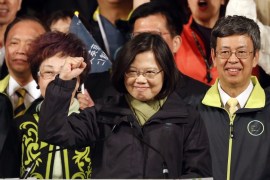 Taiwan votes: Can democracy work in a Chinese culture?

Trading with mainland China has not solved all of Taiwan’s economic problems. 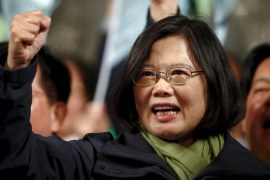