“Trump’s banana republic”, declares the title of a passionate opinion piece on the pages of The Boston Globe after a televised presidential debate between Donald Trump and Hillary Clinton. “This is banana republic territory,” the writer declares after criticising Trump for attacking the sacrosanct law enforcement officials and casting doubts on their reliability.

The metaphor become perhaps the most potent political allegory of this election season. America would be Trump’s banana republic, was the title of another opinion piece by Fareed Zakaria for The Washington Post. “The picture presented to the world,” he wrote as he criticised the “vigilante rage” of the Republican convention, “has been of America as a banana republic.”

The European press soon chimed in: “Sounding more like the potentate of some palm-dotted tropical island than a presidential candidate,” declared Nick Bryant of the BBC, “Trump twice declined to say during the final televised debate whether he would accept the results of the 2016 election.”

“Trump’s Banana Republic Justice” was the title of yet another piece in October in Newsweek, when criticising Trump’s attacks on Clinton: “This is the stuff of banana republics, not mature democracies.”

The Los Angeles Times echoed the sentiment: “He [Trump] was talking like he would become some dictator of a Banana Republic and throw her and his political enemies in jail.”

The sentence was even attributed to Clinton campaign spokesman Brian Fallon: “That is the comment of a dictator that you expect to hear in a banana republic – the idea of jailing your political opponents.”

Why a ‘banana republic’?

Why is it, if someone from “the third world”, a “banana republic”, or a “palm-dotted tropical island” might be permitted to ask, that when the purveyors of the mighty and magnificent “Western civilisation” want to characterise something nasty and loathsome in their own midst they immediately opt for a metaphor, a pejorative term such as “banana republic” that they have invented for somewhere else?

Latin American countries have been systematically colonised and abused, first by Europe and now by the United States, robbing them of their resources and installing a tyrant over the people lest they revolt against the abuse. And yet the very same abusers get to use a sarcastic term to describe the result!

In this column I have already asked this question when Muslims are used as a metaphor of fanaticism and stupidity by the left-liberal pundits in the US and Europe. But now I want to ask the same question about the larger non-European world they call “the third world” or “banana republics”.

Why is it that when a comedian such as Sacha Baron Cohen wants to make a movie about dictatorship, The Dictator, he opts to feature a dictator looking like an Arab potentate? Have there not been enough dictators in Europe: Oliver Cromwell, Napoleon Bonaparte, Benito Mussolini, Adolf Hitler, Francisco Franco, Nicolae Ceausescu, Slobodan Milosevic?

What and where is banana republic?

The seismic psychological change evident in the US in the aftermath of this election is in part because US liberals are stripped naked of their holier-than-thou arrogance of their delusional exceptionalism, that they are too smart for “third-world tyranny” to come their way.

Arguments were made, theories were woven about how we Muslims, Arabs, Africans, Latin Americans lacked something in our DNA, deep in the marrow of our bones, in our culture that we did not merit and deserve democracy, and yet suddenly smack in the middle of American democracy a neo-fascist white supremacist has emerged so that former CIA officers now worry about the US constitution under a Trump presidency.

The alarming congregation of racist, white supremacist, xenophobic, misogynist, homophobic, Islamophobic, anti-Semitic, militaristic billionaire forces inside the White House is bound to craft a whole new vintage of a nasty prescription the US has usually ordered for other political cultures, and yet it has now returned like a bulldog to bite itself.

Three of the top four candidates running for president have either contested the result (Jill Stein and Hillary Clinton) or declared millions have voted illegally (Trump).

It is now expected that Trump’s business empire will be an endless source of conflict of interest under his presidency.

If “banana republic” is to be the name of this corruption, then the US is the likely contender to become the mother of all banana republics for the whole world to see.

Is Trumpism a new brand of politics?

Is Trump the personification of every racist trope this white supremacist culture has created for other political contexts and until now thought had completely exorcised out of its own system but is now haunted by it?

Is Trump a classical example of frightful characters like Hitler, Mussolini, or Franco much closer to the European heritage of what might emerge as American fascism?

Is Trump a resurfacing of white supremacist genealogy much more deeply rooted inside the US colonial conquest of America and imperial warmongering around the globe?

Or is Trump perhaps the dawn of a whole new white supremacist fascism that crosses the Atlantic and reaches deep into European racism now ringing from UK to Greece – with variations on its theme evident in France, Italy, the Netherlands and elsewhere?

It is perhaps too early to offer any definite answer to any one of these questions. But the fact remains that the alarming congregation of racist, white supremacist, xenophobic, misogynist, homophobic, Islamophobic, anti-Semitic, militaristic billionaire forces inside the White House are bound to craft a whole new vintage of a nasty prescription the US usually orders for other political cultures, and yet it has now returned like a bulldog to bite itself.

In their book “Commonwealth”, political theorists Michael Hardt and Antonio Negri encourage us to “abandon all dreams of political purity and ‘higher values’ that would allow us to remain outside!” This admission, they believe, is only a tool towards building an alternative project, “an ethics of democratic political action within and against Empire”, aimed towards “a possible global democracy”.

That urgent objective will not happen unless and until the nasty Eurocentric name-calling of nations has collapsed completely upon itself, North American and Western Europeans are liberated from the noxious metaphor of “the West” and join the fold of humanity at large. 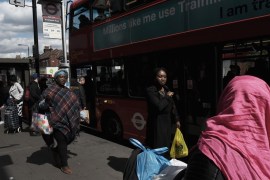 It is vital to see protest votes under economic pressure but not to the extent that ignores other motivating forces. 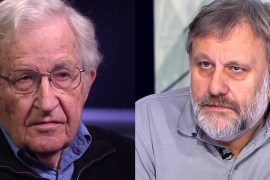 Why Chomsky and Zizek are wrong on the US elections

Chomsky and Zizek clashed on voting in the US elections, but the views of both are critically flawed.