On December 11, I’ll be going to the polling station. I won’t be voting for a district councillor or a representative in Hong Kong’s mini-parliament. Nor will I be voting for the city’s top leader, the chief executive.

The election for that post will be held next year. Instead, I’ll be voting for 30 people who will sit on a 1,200 member Election Committee that will elect the chief executive in March.

It sounds complicated and arcane, and it is.

Many had hoped the process would be simpler by now, that Hong Kong people would be able to elect their leader in a direct election, as had been promised.

But after the failure of 2014’s Occupy Movement (also known as the Umbrella Movement) to secure any concessions from Beijing, the city’s pro-democracy lawmakers rejected a “fake” universal suffrage plan that would have seen candidates pre-screened by Chinese leaders. They reasoned that accepting China’s plan would be to legitimise a rigged election.

The rejection means that nearly 20 years after Britain transferred sovereignty of Hong Kong to China, it will still be up to a committee supposedly “broadly representative” of Hong Kong society to pick Hong Kong’s leader. Since 2012, 1,200 members have been drawn from 38 sub-sectors, covering areas such as business and commerce, industries, the professions, religion, labour, social sectors and politics.

In reality, the proportion of seats allocated to pro-establishment business, industrial and trade sub-sectors give Beijing the upper-hand.

Beijing can also influence the Election Committee members drawn from the ranks of Hong Kong representatives to China’s national parliament and top advisory body. 300 candidates from the pro-establishment sectors will be returned unopposed.

Democracy supporters have always expressed lukewarm interest in what they call a “small-circle” election. But this year has seen a sea-change and a record number of 364 pro-democracy candidates are vying for seats.

The sub-sectors where pro-democracy candidates do well are in the professions, with larger individual voter electoral bases. In 2011, they fielded 212 candidates and won 173 seats. This year, they’re hoping to win at least 300 in sectors such as accounting, law, medicine, social work, architecture, education and IT.

‘Do whatever you can’

With the cards stacked heavily in Beijing’s favour, this seems futile. They would still be unable to elect a pro-democracy candidate, as the winner needs to get more than half of the maximum 1,200 votes. So why are so many pro-democracy groups mobilising for this election?

One reason may be the post-Umbrella Movement factor. The civil disobedience of the Occupy Movement street protests was a response to the failure of 30 years of democratic struggle through the ballot box, conventional, peaceful demonstrations and negotiations to achieve universal suffrage. Protesters felt they had to try non-traditional methods, outside of the established rules and institutions.

Ironically, after the movement failed to achieve its goal, participants turned their sights on those same established institutions, leading to increased numbers of pro-democracy candidates and high voter turnout rates for post-Umbrella Movement elections in 2015 and earlier this year.

Sociology professor Chan Kin-man, who co-initiated the Occupy Central campaign that led to the Umbrella Movement, and who is standing for election in the Higher Education sub-sector, described this to me as an extension of the spirit of the movement.

Most candidates reject the idea that a pro-democracy bloc could act as a 'kingmaker', but some hope they can form a critical minority.

“That spirit was that you should do whatever you can, wherever you can. So, even if we can’t turn the overall [political] situation around right now, we can still fight smaller battles,” said Chan. “The subsector election is really like a series of mini-referendums in each sector where people are asked ‘do you support democracy? Do you support [incumbent Chief Executive] CY Leung?'”

In a conversation with me, political scientist Ma Ngok predicted that the pro-democracy forces will do well. He pointed out many progressive small professional groups formed after the Umbrella Movement, made up of people who were fed-up with being “represented” by traditional conservative factions in their sectors.

“In the past two years, Hong Kong seems close to breaking point. Everyone is very dissatisfied, it’s not limited to young people, but also the middle-aged and the professionals,” said Ma. “There’s no universal suffrage, so people ask ‘what can we do? Should we try to crack the system?'”

Another factor uniting a large number of pro-democracy candidates is their desire to prevent the highly unpopular incumbent Leung Chun-ying (also known as CY Leung) from seeking and getting a second term. Leung is a polarising figure who took a hard line stance against the Occupy Movement’s calls for democracy and recently initiated moves to disqualify lawmakers who made political statements in taking their oaths of office.

Most candidates reject the idea that a pro-democracy bloc could act as a “kingmaker“, but some hope they can form a critical minority. Francis Fong, who is a member of the IT Vision ticket contesting the 30 IT sub-sector seats, is one of them.

“It’s not so much about being a critical minority who can actually decide who wins, but helping to create a momentum that can create change in the early stage of the process, that can influence who gets to run in the first place,” Fong told me.

Fong is referring to the fact that, at this stage in the run-up to the 2012 chief executive election, the hopefuls had all declared their candidacies

This time, with the election little over three months away, Beijing does not appear to have given either Leung or his possible rival and Financial Secretary John Tsang the green light to run. Commentators like Ma believe Chinese leaders are waiting to see what the results of the sub-sector elections will be.

Francis Fong hopes a good showing for pro-democracy candidates will pave the way for a less hardline and combative candidate to have a shot at the top job, even though he doesn’t have any illusions that such a leader would be either willing or able to stand up to Beijing under the current system. 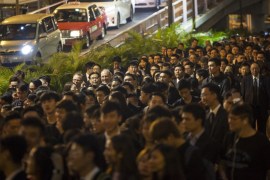 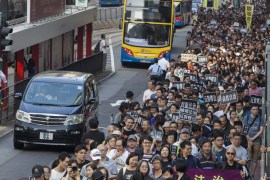