Twenty-five years ago, the United States emerged victorious at end of the Cold War. The Soviet Union imploded. European countries eagerly signed up to join a political union and common currency. NATO turned its eyes to the former Eastern Bloc countries to see which ones would join their alliance. The US vision of free trade and liberal democracy has become the hallmark of globalisation. It was a happy ending to half a century of conflict. Or so it seemed.

Now, pretty much all of a sudden, it all seems to have stalled – or worse, appears to be going in reverse. The Brexit referendum is clearly a turn away from a more open and united world, back towards nationalism. Primaries in France and the vote in Italy and Austria imply similar nationalist sentiments. Donald Trump placed anti-immigration, anti-free trade, and anti-globalisation rhetoric at the centre of his campaign, saying it all, and, of course, saying it louder than the rest.

All this, plus his adoration of Vladimir Putin, makes it look as if the grand ideals of the West have severely frayed and the fabric is unravelling before our eyes.

What went wrong? Is this the beginning of the end of the American century?

My first impulse is to pause, and to say “don’t jump to conclusions”. Even if they’re the obvious conclusions.

The West has always fed on crisis and competition. Europe has renewed itself and expanded through incessant shock therapy. Britain never really wanted to be “continental”. An Italian government fell, well, that’s what Italian governments do – 65 governments in 70 years. The distinctions between French leaders are discernible primarily to the French. And the US reinvents itself as often as Hollywood.

Yet, the unease does not disappear. It seems there really is a deeper crisis. Witnessing the British, American and French vote first hand this year, I tell you, there’s a deep feeling of anger, bitterness and even betrayal. Like Westerners have come to the end of the road; like they’re falling from the mountaintop. Even the winners seem rather angry much of the time.

Who could’ve imagined it, let alone predicted it?

In fact, many did. I heard it said in many different ways in Moscow and Beijing, Budapest, Cairo, Sao Paolo and Nairobi. The righteous self-congratulation in Washington and London was seen as arrogance elsewhere in the world.

So why and where did the train come off the tracks?

It started happening right when everything else happened. In 1991. And the root causes can be found and summarised in two main factors.

Flush with the conviction that the US was the world’s “sole” superpower, convinced that the end of history had come, that democracy and capitalism were finally recognised as the only viable and acceptable ideologies, victorious over all others and never to be superseded, the leadership wanted some grand event to demonstrate it, to show it off, to display the triumph to the rest of the world. Like the fall of the Berlin Wall, but bigger and with more fanfare.

In addition, they’d been developing, building, and stockpiling unlimited military supplies for decades. They were right there. Ready to be used. But the Soviet Union imploded from within and the weapons were becoming obsolete.

Enter Saddam Hussein, the pompous Iraqi leader, who, after an eight-year destructive war with Iran, decided to invade and annex Kuwait. His folly provided the West with the perfect alibi. No one was allowed to mess with oil-rich Gulf region under America’s watch.

Washington and London dismissed appeals for diplomacy. They organised an astonishing international coalition and in a matter of weeks deployed over half-a-million soldiers to the Gulf. After two months of air strikes and skirmishes, Saddam’s forces were driven out in two days. It was a profitable war, by all standards.

Despite all the carping and complaints, the West remains more powerful, prosperous and better synchronised than other areas of the world.

But the war continued through other means, no-fly zones, sanctions and containment; even “dual containment” against both Iraq and Iran.

The US convened an international peace conference in the same year. Its goal was to establish a “New Middle East Order” with Israel at its centre, just like the West was becoming the centre of the “New World Order”. But the US wouldn’t or couldn’t get Israel to end its occupation of Palestine in return for peace. The violence continued as the conflict endured.

The bravado of the West’s total supremacy was shattered on 9/11. Osama bin Laden, who used the deployment of American troops in Saudi Arabia in 1991 as a rallying cry for al-Qaeda, hit the “Great Satan” in the heart killing many innocent people. Vulnerability. Confusion. Humiliation. Pessimism.

With Bin Laden still at large, with the goal of regime change in Afghanistan – not yet and never to be fully achieved – the US and Britain and “the coalition of the willing” launched a new war on Iraq. Unlike the previous war on Iraq, they didn’t bother with a United Nations Security Council resolution to legalise it.

Instead of displaying Western dominance, it demonstrated the very severe limits of Western power. It cost trillions, killed thousands, left chaos, and achieved nothing. It morphed into the “war on terror“, which spread everywhere in the Islamic world.

The latest incarnation of the West’s strategic limitations revealed itself through its military action in Libya, inaction in Syria, and its total incompetence in dealing with the Islamic State of Iraq and the Levant (ISIL) over the past three years. All of which led to hundreds of thousands of deaths and millions of refugees, many of whom ended up on the shores of Europe.

Indeed, the world began to look more and more like a microcosm of Israel’s occupation of Palestine. On the one hand, a domineering and prosperous, yet increasingly xenophobic and insecure, powers, and on the other, war-ravaged, impoverished and revolting peripheries. Both moving towards political and theological extremes and engaging in asymmetrical conflict.

Those were the political misadventures. Next, the faults of unleashed capitalism decided to make a dramatic display of themselves. Just as the arms manufacturers and oil companies deformed foreign policy in the Middle East, the banks and the financial industry screwed the economy.

Eventually, the biggest banks in the West began to wobble. Then, they started to fall. The underlying problem was the same. Arrogance. The belief that the “ideal” was so perfect and so wonderful that anything done in the name of capitalism had to be right, by nature, and make everyone happy.

There was no need to restrain greed, crony capitalism, misrepresentation, or even fraud. The ever-increasing level of income inequality had to be the fault of the less equal, for having less discipline, less drive, and especially, less education, while the concentration of wealth in the hands of the gross and the greedy, had to be the just rewards of virtue; and moreover, everyone would understand that and approve. That turned out to be wrong on all counts – correct on none.

Instead of re-investing in their national economies and empowering their working classes to compete with the rising cheaper working and middle classes of Asia and Latin America, Western conglomerates have shown to be anything but patriotic. Indeed as their title underlines, these are multinationals that are always on the look for cheaper labour and tax shelters.

Americans wanted “change!” They wanted it so much they were willing, for the first time in their history, to do the unimaginable and elect a black president.

He promised “change”. He promised to change the mind-set that brought about the Iraq war and the financial crisis. But the commander-in-speech only achieved tweaks as the US continued to move away from democracy towards oligarchy. The too-big-to-fail banks became bigger and America is now back in Iraq.

The next cry for “change” was the turn to populism. The election of Trump and his admiration for Putin should show, on the face of it, what an unproductive choice that will be. Similar developments are likely in France, come May elections.

But, despite all the carping and complaints, the West remains more powerful, prosperous and better synchronised than other areas of the world. Europe might be in crisis, and many of its peoples are changing their minds about their new European identities, but it’s premature to eulogise the EU.

One of two things will happen: Either there will be a reawakening and swing back of the pendulum to a refreshed and reinvented set of Western ideals.

Or the new leaders will batter the institutions that made their nations great, weaken the alliances, and lead the decline of the West and the post-Cold War world order. 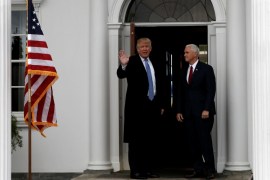