One of the basic principles of democracy is “one person, one vote”. Other criteria for an efficient and robust model of democracy include an informed and critically inclined citizenry and the presence of a political culture catering to the “common good” instead of the self-centred whims and boundless greed of the rich and powerful.

Unfortunately, none of the above are representative features of American democracy: American politics is increasingly ruled by a moneyed oligarchy that calls the shots, while the country has shifted from a society of citizens to a society of consumers.

The highly flawed nature of American democracy has become more striking in recent years as the absence of political ethos works in tandem with massive economic inequality, job insecurity, and a declining standard of living to produce conditions ripe for corruption, manipulation of public opinion, and authoritarianism.

Indeed, the presidential election of 2016 speaks volumes of the crisis facing American democracy, making the world’s richest and most powerful nation resemble a “banana republic”.

For starters, the contest for the White House was between a megalomaniac billionaire with no experience whatsoever in the “art of the possible” (but competent with entanglements with foreign governments and leaders, and an uncanny ability in twisting the tax law to his advantage) and a lifelong politician, widely regarded as a darling of Wall Street as well as a warmonger.

If this is not a sign of a moribund political system, the candidate elected to become the 45th president of the United States lost the popular vote by a bigger margin than of any other US President. Donald Trump was elected president by trailing Hillary Clinton by nearly three million votes.

This “democratic” anomaly is owing to the fact that US presidents are chosen by electors, not by popular vote.

To be sure, there is nothing in the constitution that grants American voters the right to choose their president. When American voters go to the polls to vote for a presidential candidate, what they are essentially doing is casting a vote for their preferred party‘s nominated slate of electors.

The manufacturing of an individualistic, consumer-driven culture is intended to promote conformism, ignorance and apathy about public affairs, but also a perverted sense of patriotism which targets critically oriented voices as being 'anti-American', thereby opening up a political space for the rise of the likes of Trump, Bush, and Reagan.

The electoral college system is democracy‘s ugliest anachronism. Because of the design of the electoral college, intended by the founding fathers to prevent the masses from choosing directly who will run the country, a candidate can win the nationwide popular vote and still lose the presidency.

This is what happened in 2000, when Al Gore won nearly half a million more votes than George W Bush, but it was Bush who won the presidency by being declared winner in the state of Florida by less than 540 votes. And, of course, history repeated itself in the 2016 election.

But this is not all. Voter turnout for the presidential elections in the world’s outdated democratic model is consistently disturbingly low, an indication that many Americans may feel they their vote doesn‘t count.

Indeed, voter turnout in the US is incredibly low compared with other advanced democratic nations around the world, ranking 31 out of 35 developed countries.

Some of the reasons for the low voter turnout in the US are attributed to the existence of the electoral college system itself, the two-party system, and even to the fact that elections are being held on a day when most people work.

More than 90 million eligible voters did not vote in the 2016 US presidential election – even though this was deemed to have been one of the most critical elections in recent memory owing to the highly inflammatory statements made by Trump about Mexicans, women, Muslims, and gays.

The reason why so many Americans are abstaining from voting, a cornerstone of democracy, is intrinsically related to the long-stemming pathologies of the American political culture, namely an individualistic and consumer-driven society where the great majority of people cannot name a single Supreme Court justice but trust the military to act in the public interest and act as a cheerleader for the US’ militaristic adventures and wars, and a political system increasingly controlled by the wealthy and business.

The manufacturing of an individualistic, consumer-driven culture is intended to promote conformism, ignorance and apathy about public affairs, but also a perverted sense of patriotism which targets critically oriented voices as being “anti-American”, thereby opening up a political space for the rise of the likes of Trump, Bush, and Ronald Reagan. That is to say, authoritarian, anti-labour, neoliberal, and jingoist politicians who wish to roll back whatever economic and social progress average Americans have made since the 1960s and maintain the empire.

Undoubtedly, ever since the 1980s, the US has been moving closer and closer to a social order that Bertram Gross identified some 35 years ago as “friendly fascism”, an ever closer symbiosis between big business and big government, while citizens are relegated to the sphere of the purely “private”, enjoying material goods in exchange for social and political rights.

Indeed, looked at from various perspectives, it would seem that the 2016 US presidential election has brought to the surface all of the ills of America’s flawed democracy.

What happens next is hard to predict, but it is likely that very interesting times lie ahead both for “the land of the free and the home of the brave“ as well as for the rest of the world. 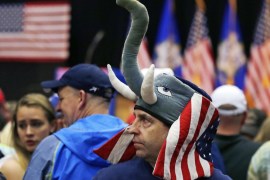 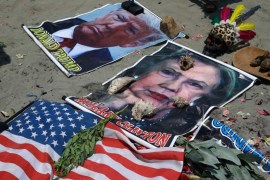