During his presidential campaign, Donald Trump (in)famously declared that he would build a wall between Mexico and the United States (and make Mexico pay for it) to keep the criminals and “rapists” out.

Promising to protect the American worker, he also insisted that he was going to void the Trans-Pacific Partnership, a 12-country free trade agreement that aims to make it easier for big corporations to ship jobs overseas.

His campaign clearly played on the fears of many American citizens, as many pundits have already pointed out, marshalling hyper-nationalist, xenophobic, racist, and misogynist sentiments to pander to a certain segment of potential voters.

Analysing Trump’s shocking victory, professor Cornel West maintains that it represents the “desperate and xenophobic cry of human hearts for a way out from under the devastation of a disintegrating neoliberal order”. “It was the lethal fusion of economic insecurity and cultural scapegoating,” West explains, that has brought neoliberalism to its knees.

But is neoliberalism really on its knees?

The owner of a vast business empire, President-elect Trump is, more than anything else, a businessman. Not having one iota of political experience, he ran on an anti-politics ticket in which his business acumen was touted as a serious qualification for the presidency. Indeed, he promised to run the government like a business enterprise.

Trump’s cabinet picks suggest that, perhaps for once, he was not misleading the public. Talking neoliberal-speak, their rhetoric is uncannily familiar: privatisation, deregulation, capital enhancement, and entrepreneurialism.

What Trump neglected to state is that neoliberalism flourishes in societies where the playing field is already stacked against various segments of society, and that it needs only a relatively small select group of capital enhancing subjects, while everyone else is ultimately dispensable.

The soon-to-be-Secretary of Education, Republican billionaire Betsy DeVos, for example, has been instrumental in deregulating Michigan’s charter schools. Not unlike the privatisation of prisons, in Michigan, around 80 percent of these schools are currently run by private companies.

West is consequently wrong on this particular front. What we are likely to witness is not the end of, but rather a trumped-up version of, neoliberalism.

If, in the Barack Obama years, we saw neoliberalism intersect with a variety of progressive projects, such as marriage equality, in the coming years Americans will likely be subjected to a convergence between ethnonationalism and neoliberalism.

Actually, this convergence is nothing new. One has only to look at Israel, where since the mid-1980s neoliberalism has been thriving in conjunction with ethnonationalism and a colonial settler project.

West’s claim that hyper-nationalism, or even neo-fascism, will ultimately usher out our neoliberalism era, therefore, doesn’t ring true to people coming from my neck of the woods.

Over the years, we have witnessed how the Israeli government has effectively mobilised hyper-nationalism to further entrench neoliberalism, by harnessing hate towards Palestinians with the hope of deflecting and covering up the devastating repercussions that neoliberal economic policies have had on large segments of its Jewish citizenry.

Israel is also living proof that a country can create walls for certain “undesirables” while allowing capital to flow unhindered.

It would be a mistake, however, to understand neoliberalism as merely a set of economic policies. Rather, it is a regime of truth and value that construes all aspects of our world as business enterprises; even human beings are increasingly transformed into a kind of “human capital”.

In other words, under neoliberalism, we increasingly relate to ourselves as a resource in which we must invest in order to increase our value over time. In such a regime, only capital-enhancing subjects are worthy and only human capital that enhances the credit of the nation, now construed as a business enterprise, will thrive. This is precisely Trump’s dream for America.

In a recent opinion article, Mike LeVine writes that “many working and middle-class whites [realise that the neoliberal era] is never going to produce the kinds of jobs and lives for which they have long felt entitled.”

Consequently, when Trump “gave them a choice between an ersatz multiracial democracy in which they are increasingly disadvantaged” or a vote for white privilege and supremacy, they voted for the latter. Well, they probably did not vote for neoliberalism, but neoliberalism is precisely what they are going to get.

Under neoliberalism as a regime of truth, inequality is legitimate because there are, simply and shamelessly, winners and losers.

What he neglected to state is that neoliberalism flourishes in societies where the playing field is already stacked against various segments of society, and that it needs only a relatively small select group of capital-enhancing subjects, while everyone else is ultimately dispensable.

Trump’s ascendancy should not be seen as marking neoliberalism’s demise, but rather as ushering in its newest stage.

Indeed, what we are witnessing is the transmutation of a Clinton-Obama neoliberal order with its liberal rights-promoting veneer into a neoliberalism shorn of any trace of shame or guilt. This is truly neoliberalism on steroids.

Catherine Rottenberg is a Marie Sklodowska Curie Fellow in the Sociology Department, Goldsmiths College and the author of Performing Americanness: Race, Class, and Gender in Modern African-American and Jewish-American Literature. 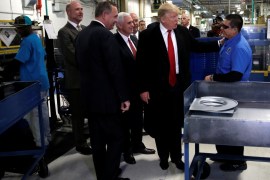 Voting for Trump was not voting for a con man; rather, it was a strategic action to maintain a fragile privilege.

Cuomo’s fall, #MeToo and the ‘disposables’