It’s been entertaining to watch the press crowd come out to Indian Country. They didn’t want to, of course, but after a few months of United States security forces using tear gas, rubber bullets, mace, water cannon and concussion grenades on hundreds of indigenous protesters intent on stopping an oil pipeline, they had to.

When the mainstream media finally showed up en masse, the scene at the Dakota Access Pipeline (DAPL) played out like a revisionist western movie. This time, the Indians out on the prairie were fighting a corporation instead of the cavalry. They had horses and drums and some had painted faces – like the Indians in Stagecoach – but they also had drones and mobile phones, which made them thoroughly modern. Like their ancestors before, they were making a stand to protect their homeland, and this time, they were winning.

It’s sexy, isn’t it? That’s part of the problem.

What is newsworthy, what is not

In April, members of the Standing Rock Sioux Tribe began camping along the proposed DAPL route to stop construction. Over the next few months, indigenous people from around the country began travelling to the campsite to offer support.

By the end of July, it became clear that something extraordinary was happening at Standing Rock. Social media was flooded with requests for ride shares and supplies, and citizen journalists, photographers and bloggers began posting content from Standing Rock. Yet, the growing movement remained largely invisible outside Indian Country.

It took until the end of August for NPR or the New York Times to send reporters out, while other outlets such as CNN and NBC waited until October to get on the ground.

Standing Rock finally became a regular addition to newscasts, talk shows and roundtable discussions by the end of November.

In other words, it took nearly five months for mainstream outlets to recognise that a few thousand Native Americans physically resisting the construction of an oil pipeline was newsworthy.

The election played a big role in the press corps’ inability to see what was happening at Standing Rock, but the real reason national outlets didn’t pay attention is much simpler: They don’t care about Indians.

When things finally come to a head and people take to the streets - or in this case, the plains - journalists are more than happy to return to Indian Country: that place where the modern and the ancient world clash.

The Standing Rock Sioux Tribe began fighting the DAPL nearly two years ago because government agencies failed to adequately follow federal regulations. Reporting that kind of story – the kind that requires thumbing through reports, letters and memos between government agencies and tribes – can be done easily online.

It’s not ninja-level-Freedom-of-Information-Act-style-journalism, it’s the kind of work that an enterprising news organisation committed to the principles of ethical journalism – public enlightenment, justice, democracy, etc – could easily do if they had any desire to cover Indian Country. Establishing an Indian Country beat isn’t all that crazy, considering the vast resources some outlets devote to covering niche issues as important as the cannabis industry, drones, or listicles.

This is all to say that the same regulatory environment that led to Standing Rock is the same all over Indian Country, and one needs only to sift through publicly available documents to see where the next DAPL-style action will happen, because it is going to happen again.

But that’s a tall order for many organisations. One of the last times the press showed up in force in Indian Country was 1973, when members of the American Indian Movement (AIM) took over the town of Wounded Knee on the Pine Ridge Indian Reservation.

During the 1973 takeover, AIM captured national attention as they took to the prairie to fight corruption on the reservation. They were sexy. They had horses and drums and some had painted faces, but they also had jean jackets and AR-15 rifles, and like their ancestors before them, they were making a stand.

When the occupation was over and the gun-smoke had cleared, reporters went home, returning only occasionally to record the problems of Pine Ridge.

“It’s as poor as America gets,” wrote the New York Times. “Seventy to 90 percent of adults are unemployed,” reported Diane Sawyer. After visiting Pine Ridge, the BBC dutifully reported that life on Indian reservations was often “marked by a combination of crushing poverty and chronic alcoholism”. Al Jazeera’s visit in November highlighted the fact that life expectancy on Pine Ridge “is the second-lowest in the western hemisphere, behind only the Caribbean country, Haiti”.

Hollywood isn’t the only industry interested in endless remakes.

OPINION: N Dakota pipeline protest is a harbinger of many more

It doesn’t happen often, but when journalists venture away from Pine Ridge to cover any of the other 566 federally recognised tribes in the US, the tales aren’t that different. Reporters tell stories of dying cultures and languages. Stories of sexual assault and violence, or diabetes and obesity. The lesson these stories teach America? Indigenous people are incapable of adjusting to the modern civilisation.

It’s common for journalists to reduce indigenous people to one-dimensional characters caught between two worlds. In fact, for the press, it’s a tradition.

For almost as long as America has been a country, media has championed the image of the Indian on the edge of civilisation, occasionally emerging from a teepee wearing face paint and jumping on the back of a horse, while eminent extinction looms in the distance like a dark cloud. That approaching destruction, and the statistics that make it so clear, has been printed, ad nauseam. But 240 years after America’s birth, us pesky Indians are still around.

Despite that fact – the fact that we indigenous people survive and thrive – the story mainstream media likes to tell is one of gloom, doom and loss. It’s as if the press was engaged in a group conspiracy to expedite the destruction of America’s indigenous people by ignoring their dynamic lives, voices, struggles and contributions.

But when things finally come to a head and people take to the streets – or in this case, the plains – journalists are more than happy to return to Indian Country: that place where the modern and the ancient world clash.

“Horseback riders, their faces streaked in yellow and black paint, led the procession out of their tepee-dotted camp,” wrote the New York Times when it arrived at Standing Rock. “Two hundred people followed, making their daily walk a mile up a rural highway to a patch of prairie grass and excavated dirt that has become a new kind of battlefield, between a pipeline and American Indians who say it will threaten water supplies and sacred lands.”

The truly bleak fact is that journalism’s daily affirmation of giving voice to the voiceless comes with fine print for indigenous people: to make the news, one must “play Indian” first. 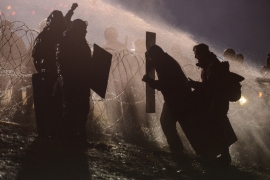 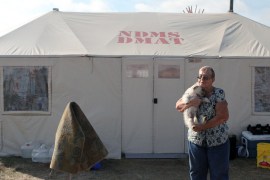