Donald Trump’s victory in the US presidential election has unleashed a media barrage suggesting that France was next in line for a possible shake-up of the political system.

Voices across the political spectrum posed the same question: What if the American scenario were to repeat itself in France, with Marine Le Pen, leader of the far-right party National Front, elected president of the republic in the May 2017 presidential elections?

French President Francois Hollande went so far as to speak of a “period of uncertainty“, while right-wing candidate Alain Juppe warned the French people of “the risks of demagoguery and extremism”. The left-wing newspaper, Liberation’s headline screamed “Trumpocalypse” While Johan Hufnagel, a Liberation columnist wrote that xenophobia and the far-right are on the rise in Europe thanks to “ultraliberalism without limits.”

Even the right-wing daily Le Figaro spoke of an “Electroshocked Europe after Trump’s election” while Jerome Fenoglio, Le Monde newspaper’s director, commented that Trump’s election is “an earthquake, a game changer for Western democracy”.

It is quite understandable to see comparisons between the ideological aspirations and political programmes of Trump’s camp and French far-right party National Front’s candidate Marine Le Pen.

However, similar ideologies do not necessarily guarantee the same political accomplishments, given that the political, social and economic contexts are quite different in the US and France. In fact, these key differences make a Trump-like victory for Le Pen almost impossible.

At a first glance, the parallels between France’s Le Pen and America’s Trump may seem overwhelming, but the two operate in completely different political and electoral systems.

The US political system, based essentially on the bipartisan principle, is much more predictable than the French multiparty political system. The latter allows all types of political alliances to form, which could generate a multitude of configurations rendering a Marine Le Pen victory very much avoidable.

It is also the nature of the electoral system applied in both countries that preclude a Le Pen victory a la Trump. While the US presidential election takes place in a single round, in France, the process is accomplished in two rounds allowing the two candidates who come first and second to make political deals and attract the votes of any of the disqualified candidates for the second round.

Partnering with a far-right party remains the ultimate taboo in French politics that no major party has ever broken, or is ready to break.

In that sense, several key political figures from both the left and the right, such as Francois Fillon, Francois Hollande and Nicolas Sarkozy (who is no longer in the race), have already announced their intention to ally with the candidate who will stand against Le Pen in the second round of the presidential election, in case the latter managed to reach the final round.

If the past was anything to go by, the overwhelming majority of left-leaning voters would vote for any centre-right or right-wing candidate in order to block the far-right candidate in the second round, as was the case in the 2002 presidential election when Jean Marie Le Pen (Marine Le Pen’s father) made it to the final round.

A “republican front”, incorporating conservatives backing the right-wing candidate and socialists whose candidate, Lionel Jospin, failed to reach the final round, was initiated and unanimously voted against Le Pen in favour of Jacques Chirac, who won the election by 82 percent of the vote.

By contrast, in the US, an intense competition in the primaries before the actual vote in the bi-partisan system can weaken a candidate. This is what happened with Hillary Clinton, who did not manage to attract all supporters of her Democrat rival, Bernie Sanders.

Furthermore, the failure of pollsters to predict Trump’s victory is unlikely to take place in France. This is because the winner in the French elections is simply the candidate that manages to collect the highest number of votes, unlike in the US where the president gets elected by the Electoral College, which does not necessarily reflect the popular vote.

The social, racial and historical factors that dominate the US political landscape do not really match those in France, although the French far-right candidate may embrace many of Trump’s electoral campaign slogans.

Trump’s electoral campaign was very successful in stirring racial fears and flirting with white supremacist sentiments. Although Le Pen has used xenophobia and Islamophobia profusely in her political repertoire, she has not gone as far as conjuring the Nazi ghost of the 1930s.

In fact, in France, the weight of history, particularly the legacy of the World War II and the German occupation of a large swath of French territory where a pro-Nazi authority was established (the so-called Vichy Regime), still has a traumatic effect on the French collective psyche.

It is due to this historical trauma, that partnering with a far-right party remains the ultimate taboo in French politics that no major party has ever broken, or is ready to break.

While indeed the far-right is on the rise across Europe, feeding on economic instability and the refugee crisis, France’s society and political system still hold the necessary mechanisms to keep this resurgence in the political fringe. 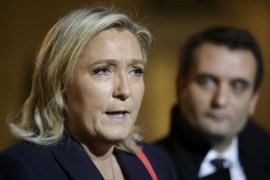 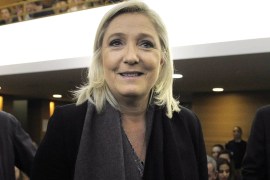