When economic waves come out of Washington, they rock Canada.

Now, with the Donald Trump tsunami heading towards the White House, Canadians fear their already floundering economy could be sunk.

Pundits and politicians are already predicting the death of trade agreements between the two neighbours which, until recently, when China edged out Canada, ranked as each other’s top trading partners.

That’s because, as CNN reported last week, a leaked memo reveals that Trump will trash the North American Free Trade Agreement (NAFTA) as soon as he sits at his Oval Office desk.

Not only has the president-elect repeatedly called the 22-year-old NAFTA a “disaster”, he has added Canada to his “free dump” hit list, along with China, Mexico, Japan and Vietnam. As he claims, “We lose with Canada – big-league. Tremendous, tremendous trade deficits with Canada.” Well, no.

Canada creates jobs in the US

While it is true that Canada now exports more to the United States than it imports – a difference of about $20bn a year – it sends south much-needed resources that help keep the few American manufacturing jobs left in the US.

Not that the president-elect would notice, given how much of Trump’s business is offshore.

Our softwood lumber helps keep American housing affordable. Our hydro provides electrical power. We are the largest supplier of oil and natural gas to the US, ahead of Saudi Arabia and Venezuela.

What’s more, many of the “Rust Belt states” that voted for Trump are the very same states that would suffer just as much as Canada if Trump were to tear up NAFTA. Consider Ohio, where Trump trounced Hillary Clinton. More than 300,000 jobs there depend on Canada-US trade and investment.

In fact, nine million jobs throughout the US result from Canada-US trade and investment.

This is why former democratic presidential candidate Howard Dean cautioned: “What’s hurt our economy much more than NAFTA is the gross failure of us to redistribute wealth properly.”

It is possible that Trump wasn’t briefed on all this. On the other hand, it’s possible that he was – and just didn’t care. After all, what did facts matter in his “post-truth” campaign to win the White House?

This is a man who knows how to draw suckers into casinos. Why wouldn’t they fall for his “Make America Great Again” rhetoric – even if it were a lie?

Canadians are concerned that Prime Minister Justin Trudeau’s carbon-pricing scheme, recently announced in his bid to fight climate change, will make Canadian products less competitive. They worry that the influence of Big Oil in Washington will send fumes spewing into their atmosphere. They fear that Trump will slash corporate taxes so low, there will be a rush of capital for the border.

And then there’s the building of the Keystone XL pipeline. This would have sent 800,000 barrels a day of bitumen from the Alberta tar sands to North Dakota and Nebraska, to end up in refineries on the Gulf of Mexico coast.

Barack Obama’s refusal to give it the green light angered both American Republicans and Canada’s Conservative government under Stephen Harper. But building the controversial pipeline might go to the top of Trump’s to-do list.

The thing is, despite Canada’s tanking economy, which is heavily bogged down by the price of oil, and Trudeau’s eagerness to find new markets for the tar sands product, the KXL is no longer such a good thing for the country. He maintains it would make Canada even more dependent on the US – a dangerous proposition at any time, let alone during a Trump administration.

So, by mid-December, it is expected that Trudeau will approve domestic pipelines such as Kinder Morgan, which will carry bitumen to the British Columbia coast where tankers will take it to China and other Asian markets.

Still, Trudeau has come under attack, from both the Canadian right and left, for his apparent buckling to Trump – without once mentioning Canadian values, as Angela Merkel did – even before all the ballots were counted.

“It’s important that we be open to talking about trade deals,” he said, after congratulating Trump on his win.

As one national columnist put it, “Justin Trudeau’s pre-emptive decision to tell one of the planet’s most voracious deal-makers that Canada is willing to renegotiate the North American Free Trade Agreement, without even being asked, ranks as one of the great examples of a sovereign government disintegrating like cheap toilet paper.”

‘Sleeping with an elephant’

Although we share our land, water and even air, the US has all the power in this relationship. Which is why Trudeau’s father, the former Prime Minister Pierre Elliott Trudeau, told the Washington, DC, press club in 1969, “Living next to you is in some ways like sleeping with an elephant. No matter how friendly and even-tempered is the beast, if I can call it that, one is affected by every twitch and grunt.”

With Obama, Trudeau had a bromance. It’s not likely to continue with Trump, despite their similar “trust fund baby” backgrounds.

Last week, former US Senator Rick Santorum, once Trump’s rival for the Republican nomination and now an ardent supporter, told a Canadian interviewer: “You’re governed by a bunch of liberals up here who have different agendas. They have the green agenda.

But Trudeau might be on to something, as the original US NAFTA negotiator Mickey Kantor pointed out last week. NAFTA, he explained, is out of date, signed before the internet, robotics and automation, the rapidly expanding technology and knowledge sectors and even iPhones.

“No agreement – certain none I ever negotiated – is perfect. They all need to be updated,” Kantor said.

But updating is one thing. Tearing up is another.

For Canada, a nation founded on the fur trade, the next four years will mean navigating through some very rough waters. Canada is the little canoe to Trump’s American destroyer.

The trick is to stay afloat – and ride the wave. 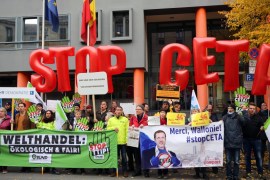 Can the EU-Canada CETA trade deal be saved?

The EU trade deal with Canada is at risk following objections from the French-speaking parliament in Belgium. 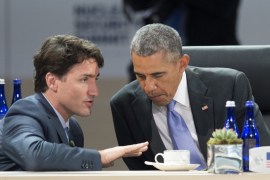 Journalism under surveillance in Canada

Canada might have a strong tradition of free press, but that has not stopped Canadian police spying on journalists.