When I attended President Barack Obama’s speech at Cairo University seven years ago, I felt the optimism he brought to the audience with his hopeful and thoughtful words – a feeling many in the Middle East shared as they hoped to put their frustrations during the previous eight years of President George W Bush behind them.

In the aftermath of the recent election which brought Donald Trump to office, feelings of anxiety and stress have resurfaced across the region. Many believe Trump’s stunning victory is nothing short of disastrous for the Middle East.

A man who does not know the difference between Sunni and Shia, Kurds and Arabs, or Ennahda and the Islamic State of Iraq and the Levant (ISIL) cannot, and should not, be trusted. Some pundits believe Trump will pay little attention to the region because of its complex and chaotic conflicts. However, these very conflicts may end up dragging his administration into the region, and no one has a clue how it would handle them.

Trump’s apparent embrace of isolationism flies in the face of the interconnected state of global and regional affairs. The anachronistic strategy of the 19th century, adopted by President Thomas Jefferson and championed by President James Monroe, is a delusion the US cannot afford.

The scariest aspect of Trump’s non-interventionist inclination is that it is not based on rational calculations. Instead, it is a reflection of despair and frustration, driven by what Trump perceives as Obama’s failures in the Middle East.

In this sense, the underlying problem is not whether Trump would intervene in the region, but that his intervention would be based on his shallow and dangerous worldview.

Three key issues inform how the Middle East may grow increasingly unstable under Trump’s presidency. First and foremost is his understanding, or lack thereof, of regional politics. Trump’s view of the Middle East is part and parcel of his wider vision of global politics, which lacks any depth or understanding of how complicated and entangled the world has become.

Trump believes disengagement from the region is the remedy for its problems. Interestingly, he has consistently lambasted President Obama for adopting a similar approach in recent years. Abandoning the region will not resolve its problems and will not make America great again.

In fact, this may have terrible consequences to the region stability including a more powerful and emboldened Iran, an surge in sectarian conflicts, a continued proliferation of radical movements, a collapse of fragile states, and an expansion of Russian influence in the Levant and North Africa.

Second is Trump’s vision of Islam, which is ominously hostile and ill-informed. It is frightening that a US president openly loathes an entire faith due to the actions of some individuals. If Trump carries this vision into the White House, it would be catastrophic for both the Middle East and the United States.

On the one hand, this view will facilitate the recruitment efforts of radical groups such as ISIL. On the other, it will increase anti-American sentiment among the ordinary citizens of the Middle East. If Trump’s rhetoric is reflected in his policies, we could be on the precipice of a renewed “clash of civilizations”, which is exactly what the Obama administration has tried to dispel over eight years.

The third relates to Trump’s authoritarian leanings, which empowers repressive regimes in the region at the expense of democracy, human rights and freedom. It is not surprising that Abdel Fattah el-Sisi was among the first Arab leaders to congratulate Trump on his victory.

Likewise, the Assad regime in Syria is likely to seize on Trump’s presidency as an opportunity to double down on its positions and continue slaughtering its own people with the support of the Russian President Vladimir Putin, another autocrat that Trump is fond of.

Following this gloomy path, a Trump presidency may serve as the death knell for American ideals such as democracy and human rights, even if these positions were upheld only rhetorically by previous administrations. This would not only increase regional instability, but would more importantly disenchant millions of young Arabs who are fighting for freedom and dignity.

If President Obama failed to address the Middle East’s problems with his rational thinking, intellectual background, and political experience, what should we expect from someone like Donald Trump who embodies the polar opposite of all these traits? 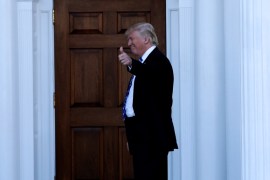